Bill Clinton just made a lot of trouble for Loretta Lynch: Republicans now calling on attorney general to step down after meeting on private jet

With an investigation into the use of emails under Hillary Clinton ongoing, Bill and Lynch meet privately on Monday 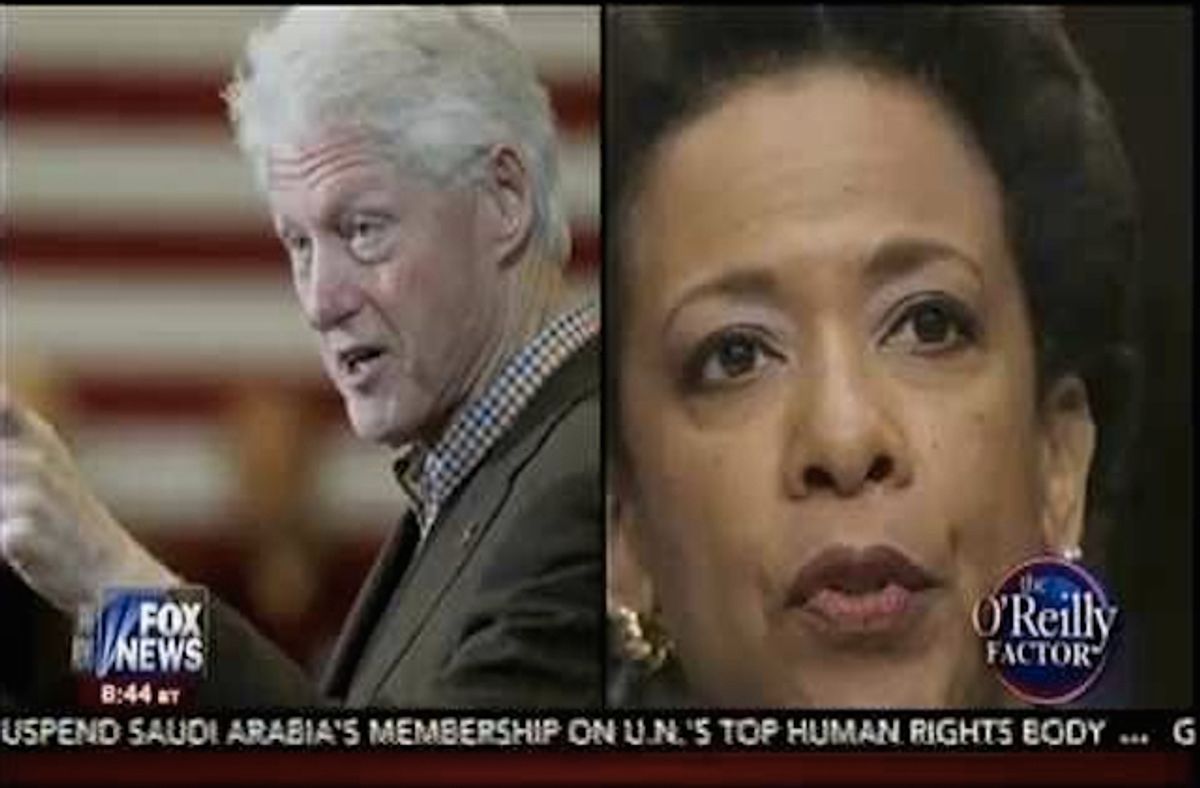 As if anymore fuel needed to be added to the conservative fire that the Obama administration is simply unable to conduct an impartial investigation into Hillary Clinton's use of private servers and emails while secretary of state, her husband decided to hold an impromptu meeting with the chief prosecutor in the investigation this week.

On Monday, Bill Clinton and Attorney General Loretta Lynch had what has been described as a chance meeting at the Phoenix Airport, where the former president allegedly held back his private jet on the tarmac to wait to board Lynch's government plane to hold a 30-minute meeting that was described by Lynch as  “primarily social.” More from CBS News:

An aide to Bill Clinton confirmed to CBS News that the meeting wasn't planned in advance: President Clinton saw the attorney general on the tarmac and wanted to say hello, so he boarded her plane to talk.

The meeting came a day before the House Benghazi Committee released a report on the 2012 terror attacks in Libya. Lynch told reporters the two did not discuss the issue. Of course, the Justice Department and FBI are also investigating the security of Hillary Clinton's private email server, which she used to conduct official business as secretary of state.

“As I was leaving and he spoke to myself and my husband on the plane. Our conversation was a great deal about his grandchildren. It was primarily social and about our travels. He mentioned the golf he played in Phoenix,” Lynch explained at a press conference in the area later.

"My agency is involved in a matter looking at State Department policies and issues," she said. "It's being handled by career investigators and career agents. It will always follow the facts and the law and do the same independent and thorough investigation that they've done in all."

Still, even the slightest appearance of impropriety at this stage has many Democrats shaking their heads at the carelessness displayed by Clinton:

“I do agree with you that it doesn’t send the right signal,”  Coons said to co-host Alysin Camerota. “I am impressed with Attorney General Loretta Lynch … I’m convinced that she is an independent attorney general. But I do think that this meeting sends the wrong signal, and I don’t think it sends the right signal. I think she should have steered clear, even of a brief, casual, social meeting with the former president.”

“She should have said no, thank you, I’m not available to meet right now,’” Camerota said.

“I think she should have said, look, I recognize you have a long record of leadership on fighting crime, but this is not the time for us to have that conversation,” Coons said.

The entire "Morning Joe" crew on MSNBC was up in arms about the meeting Thursday morning as well.

Co-host Mika Brzezinski, who was clearly incensed by the decision, lamented that "This is why this is going never be a problem for Hillary Clinton, because people are too afraid to talk about the truth and the fact that this was wrong from the get-go and wasn’t allowed."

“These two people showed the most extraordinarily bad judgment,” Republican Joe Scarborough agreed. “And where was their staff? Who was on the plane with Loretta Lynch to say, ‘You cannot do this’?”

And of course, Republicans in Congress were quick to jump on news of the meeting to again pressure Lynch to appoint a special counsel to investigate the use of email and private serves at the State Department during Clinton's tenure.

Republican Texas Senator John Cornyn, who has been a chief of opponent of Lynch since President Obama first nominated her for Attorney General, again repeated his calls for a special prosecutor.