Wimbledon's most controversial figure this year is a dress

Who cares about the sport when you might get a glimpse of a female torso? 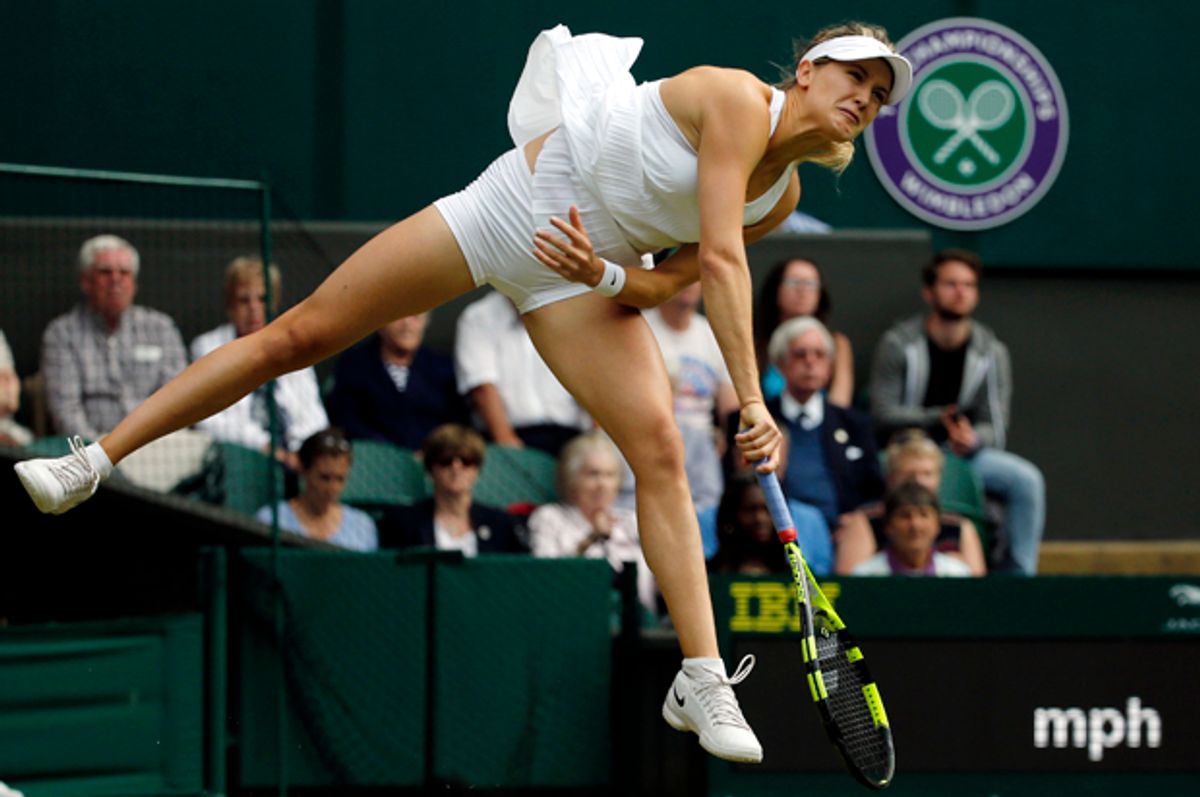 It's a prestigious competition featuring some of the greatest athletes in the world. Anyway, let's talk about what the ladies in it are wearing! And whether we can see their midriffs!

The controversial breakout star of Wimbledon this year has turned out to be the NikeCourt Premier Slam Dress — a short, swingy, babydoll-like piece of attire that has created a storm on the court. At issue are both its questionable practicality and, gasp, its potential to flutter in a revealing manner.

Writing in The New York Times Tuesday, Ben Rothenberg explained that when Nike issued the dress to the female players who represent the brand, it immediately garnered mixed reviews. The company had promised "power pleats and racerback construction, which work in tandem to enable the athlete’s movement" but players instead found, as Sweden's Rebecca Peterson said, "It was flying everywhere." Players quickly improvised their own hacks, with Katie Boulter turning a headband into breeze taming belt, and Lucie Hradecka donning leggings underneath the dress, and Nike made some alterations to the side slits. The Times says that when Nike offered its players a more traditional ensemble, "There were several takers." But others approved of the dress — Maria Sakkari told The Times, "I think it’s a very pretty dress, and I think that it’s very feminine."

Ah, to be pretty and feminine. How important are those ideals what's supposed to be straightforward competition? Very, apparently. Last year, after all, Ben Rothenberg noted in the Times that the greatest tennis player of all time, Serena Williams, “has large biceps and a mold-breaking muscular frame." He added that "Her rivals could try to emulate her physique, but most of them choose not to," because "body-image issues among female tennis players persist, compelling many players to avoid bulking up." (Williams, meanwhile, has her own version of the Nike dress, with a form fitting top and pleated bottom. On Instagram this week, she shared a photo of herself in it and declared herself "kinda in love" with it.)

Though the dress conforms to the Wimbledon standards of "decency," its billowy nature has caused a ruckus, because apparently nobody's ever seen a woman's midsection anywhere. The Telegraph called it "revealing" while "Inside Edition" naturally went all in, calling it "skimpy" and "naughty." And the CBC, trotting out the greatest word combination in search engine optimization ever, reported that "Nike brings wardrobe malfunctions to Wimbledon." Yet as Christina Cauterucci asked this week in Slate, why are women still expected to play tennis in dresses in the first place? Soberingly, it's the same question Slate first asked 15 years ago.

Times change and sometimes women can actually be defined by something other than what they're wearing on their bodies or how much skin they are showing. This week, the Miss Teen USA pageant — for those of you who forgot that Miss Teen USA is still a thing that exists — announced it was eliminating the swimsuit portion of its competition — and replacing it with an athletic wear one. One tiny step for progress at time, I guess. And in the meantime, tennis player Eugenie Bouchard, who modeled the Nike dress in its promotions, doesn't get the fuss over at item of clothing. "It’s funny that people paid a lot of attention to it," she said this week, "but I really think it’s really nice."