America has had a tyrant like Trump before: We fought a revolution to get rid of him 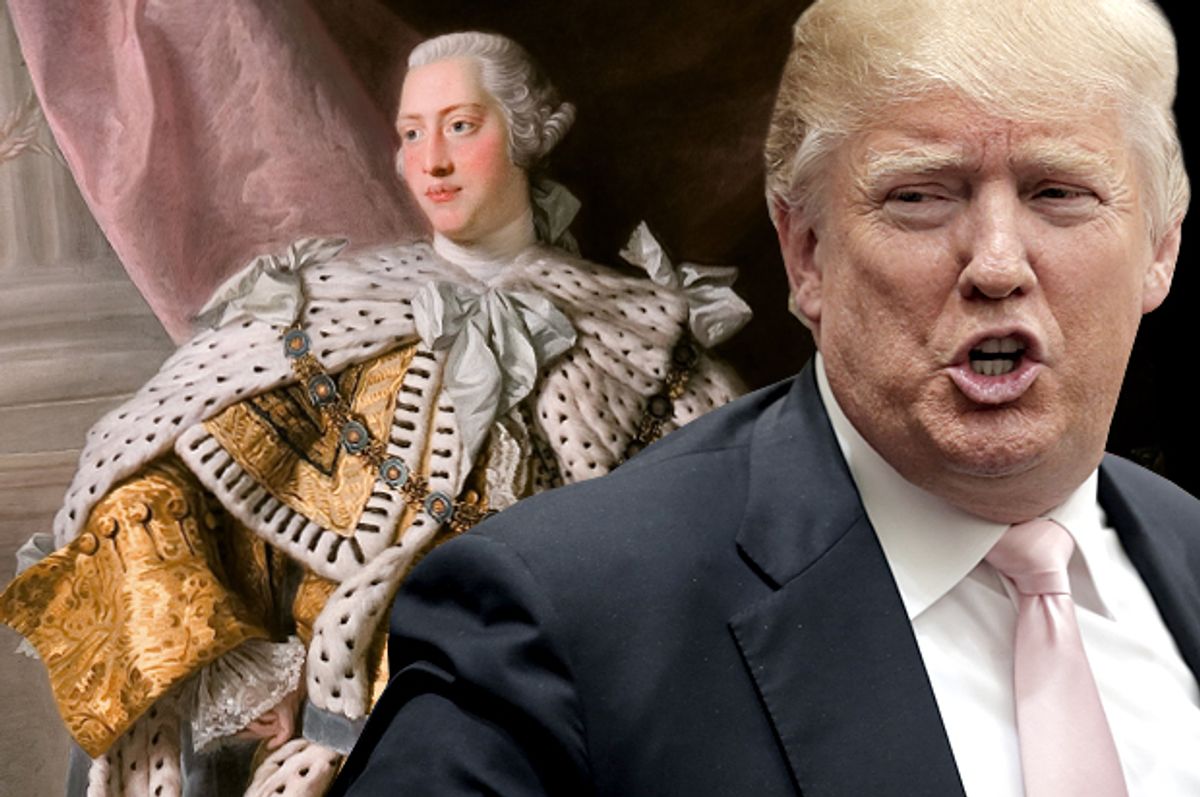 As America celebrates its 240th anniversary, the Donald Trump campaign confronts us with the vivid possibility that our democracy could look vastly different if he's elected.

No, I’m not implying that Trump is another Adolf Hitler. You don’t need to be a latter-day Fuehrer to hold positions antithetical to the spirit of the Declaration of Independence. That said, when you look at Trump’s avowed ideology, it becomes apparent that he has inadvertently aped the very tyrant whose reign prompted the American Revolution in the first place… King George III.

To understand why, let’s look at three of the grievances identified by the Continental Congress in 1776:

“He has endeavoured to prevent the population of these States; for that purpose obstructing the Laws for Naturalization of Foreigners; refusing to pass others to encourage their migrations hither, and raising the conditions of new Appropriations of Lands.”

The Naturalization Act of 1740 was hardly an ideal immigration law, at least by modern standards, since it only extended to Protestants and (under certain circumstances) Quakers and Jews… and definitely not Catholics. Nevertheless, the statute held that any foreigner who resided in one of the American colonies for at least seven years without being absent for more than two months would automatically become a citizen. Considering that subsequent scholars extended the Declaration of Independence’s proclamation that “all men are created equal” to groups excluded by the founding fathers (including African-Americans and women), it stands to reason that we can do likewise with the importance of the rights of immigrants. When Trump demonizes undocumented Mexican immigrants who come here in the hope of creating better lives for themselves and their families, or when he threatens to bar all Muslims from coming to this country because of the terrorist acts of a small minority, he puts himself at odds with our formative document.

“He has made Judges dependent on his Will alone for the tenure of their offices, and the amount and payment of their salaries.”

When Trump attacked U.S. District Judge Gonzalo Curiel for being Mexican-American, he was rightly condemned as a bigot. That said, his comments also revealed a disturbing tendency to violate the doctrine of judicial independence that has been essential to curbing executive power. Trump’s comments about Judge Curiel weren’t just racist; they also contained the implicit threat that he would defy the court if it attempted to act against him during his presidency. Similarly, Trump has promised to “open up the libel laws” so that he can sue his critics, an act that would require him to disregard the entire judicial system when it attempts to protect citizens’ right to free speech. Combine these statements with his basic lack of knowledge about the structure of our Constitution, and it becomes disturbingly clear that Trump doesn’t view himself as beholden to the judiciary.

“He has affected to render the Military independent of and superior to the Civil Power.”

When Trump was told that the military would be obliged to disobey his orders if he told them to kill terrorists’ families (which violates international law), he ominously replied that “if I say do it, they’re gonna do it.” Like his comments about Judge Curiel, Trump’s response here belies a belief that upon being elected president, he would quite literally be the end-all of political power in this country. Bear in mind, this answer came from the same man who admitted that he might have supported interning Japanese-Americans during World War II. Although Trump’s supporters may be voting for an authoritarian, our government was formed in large part to prevent tyrants from using the armed forces to actively violate civil authority and civil rights.

Although this article has criticized Trump for violating the spirit of the Declaration of Independence, that doesn’t mean he would be the first president to do so. I’m sure that liberals, conservatives and everyone in between can point to past presidents and policies that they believe were similarly disrespectful to the intent of our founding document. Nevertheless, there is a spirit of overt radicalism to Trump’s campaign that has no parallel in American political history. Even the most overzealous conservative critics of Barack Obama or liberal critics of George W. Bush would have to concede that, despite their shrill declarations that these men would destroy our freedom, they at the very least put on the pretense of wanting to preserve the American way of government.

Trump, by contrast, seems to view himself and his movement as something fundamentally different. He wants to “make America great again” through the imprint of his own personality. To do this, he is telling the people that -- as Thomas Jefferson wrote — “whenever any Form of Government becomes destructive of these ends, it is the Right of the People to alter or to abolish it, and to institute new Government, laying its foundation on such principles and organizing its powers in such form, as to them shall seem most likely to effect their Safety and Happiness.” To do this, he says, we simply need to put him in power. This makes it all the more cruelly ironic that Trump has so much more in common with the tyrant we overthrew than the freedom fighters we celebrate today.