An upside-down propaganda film, made with North Korea's approval, offers a distorted reflection of our own politics 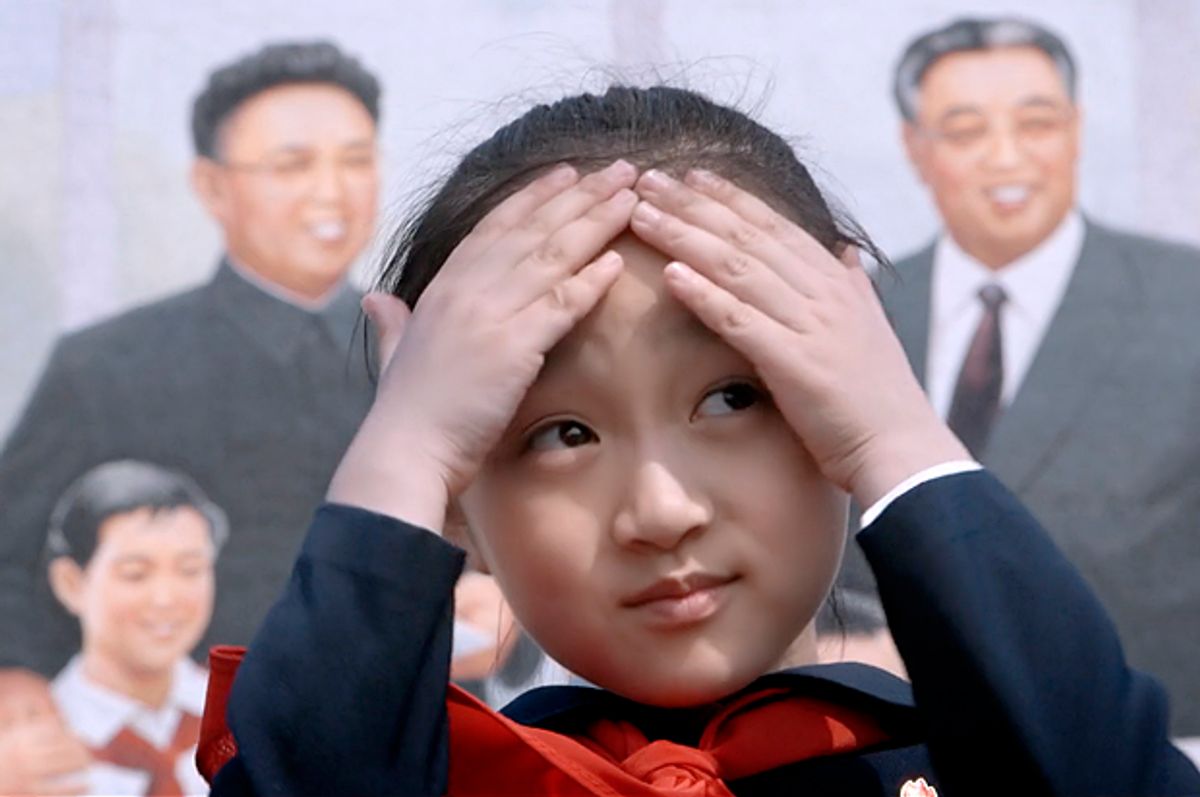 Zin-mi, the eight-year-old North Korean girl featured in "Under the Sun" (Icarus Films)
--

North Korea or, to use its official name, the Democratic People’s Republic of Korea, is listed among the producing nations of Russian director Vitaly Mansky’s profoundly disturbing documentary “Under the Sun.” If officials of North Korean dictator Kim Jong-un’s regime could undo that relationship after the fact, they definitely would. But now the movie exists and they’re stuck with another international embarrassment. You almost have to feel bad for the clueless party apparatchiks of the DPRK, who once again find themselves playing the role of Charlie Brown while some foreign filmmaker yanks away the football. They’ve been punk’d more often than Ashton Kutcher’s poker buddies. Of course we are talking about the most paranoid, most isolated and most nightmarish country on earth, by near-universal acclamation. I did say “almost.”

Properly understood, I think the lessons of “Under the Sun” go far beyond the tragic and idiotic delusions of North Korea’s nightmare state, and that those lessons have direct application in Mansky’s country, and in ours. Yes, I really am going to work this around to Donald Trump, who can only dream of the kind of brand management and media control exercised by North Korea’s rulers, but it pursuing a similar strategy in a different context.

You will definitely feel bad, if not heartbroken, for the 8-year-old star of this self-deconstructing propaganda film, an adorable child named Lee Zin-mi who is about to join the Korean Children’s Union, the Kim regime’s prestigious youth wing. After extensive negotiations, Mansky agreed to make a film about Zin-mi and her family that would be scripted by his North Korean partners, and I guess they thought they had him surrounded. Like all foreign visitors, he was monitored 24/7 and shot only in pre-approved and carefully staged locations. He also agreed to show his footage to government censors before he left the country. He did not, however, tell them how he planned to use it when he got home.

Why the Koreans allowed Mansky to film Zin-mi struggling to stay awake during an aging war veteran’s tedious tale — focused, as all such stories must be, on the inspiration provided by the late Kim Il-sung, North Korea’s “Great Leader” — I have no idea. In the very last scene, we watch Zin-mi fighting back tears under criticism from a demanding dance teacher, a scene so universal and so free of ideology (until its chilling final seconds) that it makes the barriers between her and us appear to melt away.

I suppose it simply didn’t occur to the DPRK censors that all the extra footage in Mansky’s camera — the outtakes and retakes, the extensive coaching before and during every scene — would make it clear that the entire spectacle was a feeble fraud. Zin-mi and her parents don’t really live in the comfortable Pyongyang flat seen in the film, and do not eat lavish traditional Korean lunches every day. Like the war veteran and Zin-mi’s robotically upbeat teacher and everyone else we encounter, they are performers, dutifully following a script. Zin-mi’s parents hold different and more “exemplary” jobs in the film than in real life. (Her father, who is apparently a reporter for a government newspaper, becomes a production engineer at a fabric plant.) In one of the few directorial interventions, Mansky makes clear that he doesn’t know whether Zin-mi really attends the elite school in the movie, or whether she and her parents even live together. (Many adults in North Korea live in work barracks; many children live at school.)

Perhaps some viewers will find it tempting to mock the vacuous self-importance of a society that feels like Orwell’s “1984” redesigned by morons, but I found nothing even remotely amusing about “Under the Sun.” There’s a terrible wonder in this rare glimpse inside a country that has tried to empty itself of all thought, all commerce and all civil society — of pretty much everything except an especially lame version of hero worship and despotism. And whatever you make of the 19th and 20th-century legacy of socialism, an idealistic faith that came badly unglued (but may not quite be dead, as Bernie Sanders has showed us), it’s unspeakably tragic to see it reduced to a fifth-rate parody like this. North Korea’s leadership class barely bothers to mention “Communism” these days, and once-venerated figures from the past, like Marx and Lenin, have been expunged to focus on the greatness of the Kim dynasty, now in its third generation. (Kim Jong-un is the “Respected Leader,” which seems like a downgrade from his dad the “Dear Leader” and grandpa the “Great Leader.” What comes next? The Tolerated Leader? The Viewed With Mixed Emotions Leader?”

North Korea presents the most glaring possible example of a society based on non-thought, a society where all critical thinking is replaced by conditioned dogmatic responses. (From the wary, haunted constitutionally cautious expressions of the citizens we see in “Under the Sun,” I would say it’s not working all that well.) It’s easy to point fingers at the DPRK because its version of non-thought is so bizarre and so cut off from the rest of the world. But the conflict between thought and non-thought can be found everywhere, and the alluring idea that non-thought is the most liberating and revolutionary form of thought — an idea epitomized by North Korea but hardly limited to it — is riding a rising tide. Many of the oppositions we think we perceive in the world, between “left” and “right” or between “terrorism” and “freedom,” are flawed metaphors for this deeper problem.

In Zin-mi’s school, she spends an entire morning memorizing a mythological tale about the young Kim Il-sung bombarding rich landowners with rocks and convincing his comrades that such people were “scoundrels” and traitors who had sold the country to Japanese imperialists. Maybe there is some nugget of actual history beneath that story, but that part doesn’t matter. It is “true” in exactly the same sense as the story about George Washington and the cherry tree, or the one about Donald Trump being a successful businessman who “gets things done,” rather than a second-rate con man and TV personality.

If you’re out there right now composing a tweet about how outrageous it is to compare Trump to the North Korean dictator when it’s Hillary who is the real socialist and who wears Kim Jong-un jumpsuits, just stop it. That’s non-thought, and it has nothing to do with my argument. I’m no fan of Hillary Clinton and I agree that her wardrobe has an odd Pyongyang vibe. But every time we insist on viewing politics as a zero-sum equation of Democrats and Republicans, or viewing the world as a binary contest between “Islam” and “the West,” with no clear sense of what those words mean, we are surrendering to non-thought. Trump has risen to prominence on ideas that are not ideas and thought that is not thought. He faces obstacles that North Korea’s ludicrous dictators do not face, because in our society thought is not yet illegal. Trump is also dangerous in a way the Kim dynasty can never be, because he has emerged as the perfect avatar of a historical moment, shaped by a political culture where thought is widely seen as unnecessary, uncool and hopelessly old-fashioned.

“Under the Sun” opens this week at Film Forum in New York and Facets Cinémathèque in Chicago. It opens July 15 in Los Angeles and Toronto and July 29 in San Francisco and Wilmington, Del., with other cities and home video to follow.