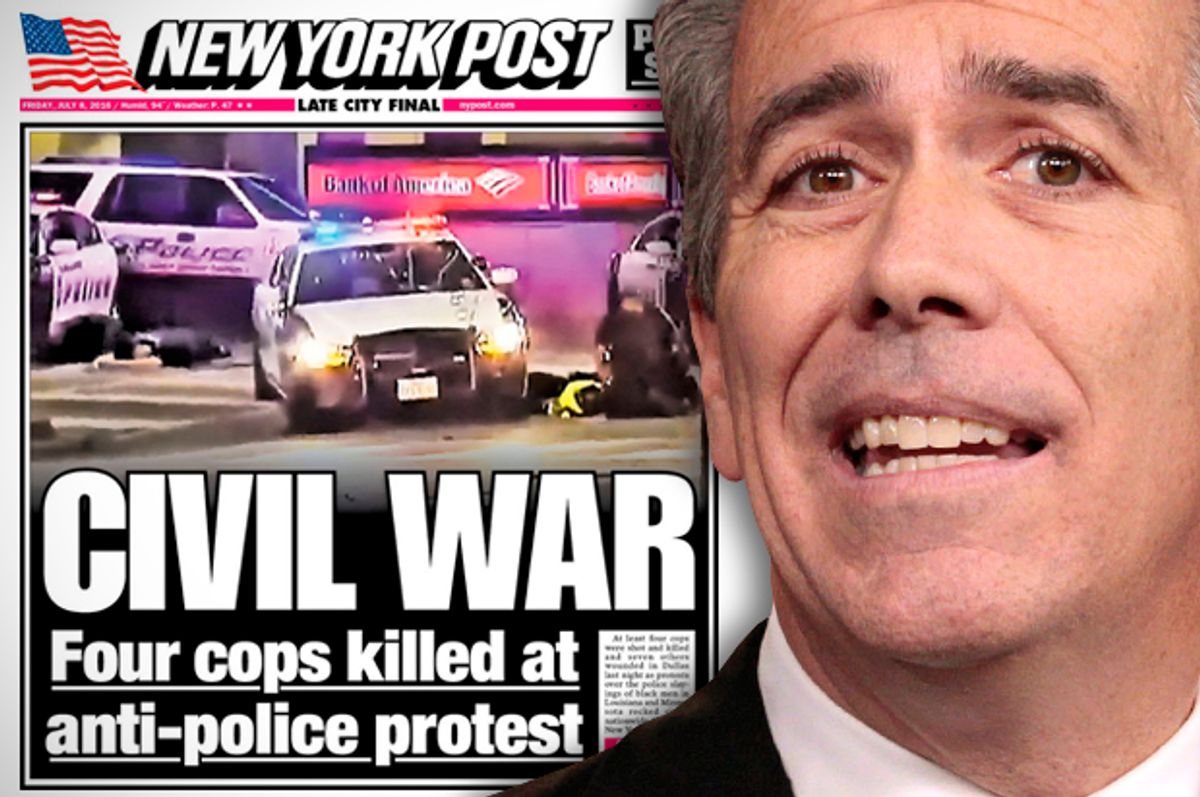 What if politicians and pundits just — in a week filled with unbearable violence and grief piled upon unbearable violence and grief — set the bar at "Don't be horrible and incendiary"? Or is that too much to ask? If you've been looking across conservative reactions to the shooting deaths of five officers Thursday in Dallas, you already know: the answer is a woefully obvious nope.

As of Friday morning, details are still emerging over the violence that erupted during an otherwise peaceful downtown Dallas protest that had been spurred by the shooting deaths earlier this week of Alton Sterling and Philando Castile, two African-American men killed by police officers. Five officers were killed and at least seven others, including two civilians, were injured. But before any real information had been released by the Dallas police department — a department widely lauded, by the way, as exemplary for its de-escalation techniques techniques and dramatically low rates of complaints about excessive force — the vultures were already eagerly painting their version of events.

Most notably, Former Illinois Congressman Joe Walsh went on a tweetstorm against the Black Lives Matter movement, and cryptically warned, "This now war. Watch out Obama. Watch out black lives punks. Real America is coming for you." Because apparently the president of the United States is not "real America." Walsh, after having it pointed out to him that his comment sounded a hell of a lot like a threat, quickly deleted the message, but said, "I wasn't calling for violence, against Obama or anyone. Obama's words & BLM's deeds have gotten cops killed. Time for us to defend our cops…. War on our Cops. Must end. It's up to us."

Walsh was hardly alone in his gleefully hasty war rhetoric, though. The always horrible New York Post jumped on the bandwagon, with a cover that announced "CIVIL WAR: Four cops killed at anti-police protest." The fact that the Post doesn't know what constitutes a war is bad enough, but how about that they can't tell the difference between an "anti racial profiling protest" and an "anti police" one?

Meanwhile, over at The Wrap — the same place that once valiantly stood by Bill Cosby against "aging actresses" accusing him of rape — the dubiously credible Sharon Waxman asked, "Is This War? When #BlackLivesMatter Veers Into Violence." Here, in its entirety, is an actual line from the piece: "The image of the man who turned himself in to police in Dallas is a young African-American with rippling muscles and a camouflage t-shirt. Update: He has now been cleared of any involvement in the shootings." Yet the headline remains!

It's funny how anxious some people are, before the facts have even emerged, to declare a "race war" and blame an entire movement on a despicable act of mass violence. During a Friday press conference, Dallas Police Chief David Brown said that one of the suspects "said he wanted to kill white people, especially white police officers." But you may remember that when Charleston church shooter Dylann Roof said explicitly he wanted to start "a race war," you didn't hear a whole lot of howls from the so-called "real America." Also, you know who else was super into the idea of a race war? Charles Manson. Wouldn't go calling the phrase "race war" a black thing. This isn't a war. It's a tragedy. As Police Chief David Brown said Friday, "Our profession is hurting. Dallas officers are hurting. We are heartbroken... All I know is this must stop."