Jessi Klein really wants you to get the epidural: "There's pressure on all women that's absurd" 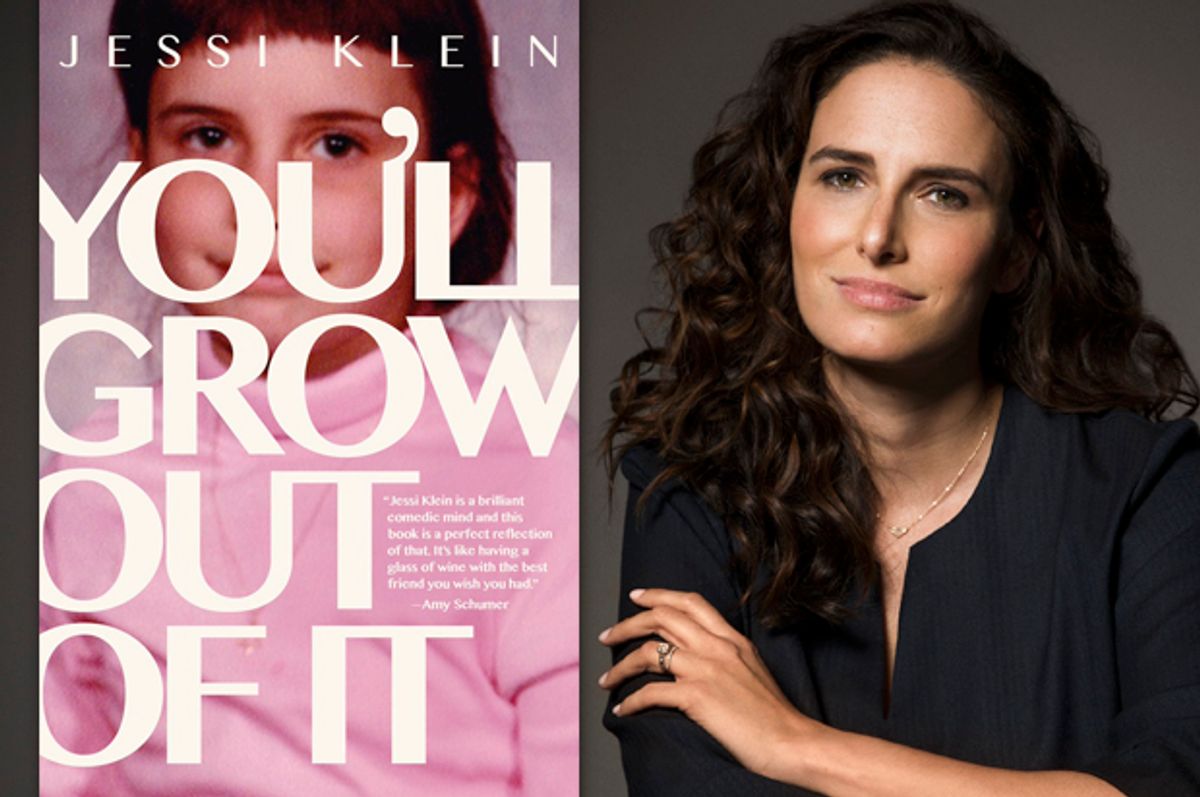 Jessi Klein is your imaginary BFF. She's the Emmy and Peabody Award-winning head writer for "Inside Amy Schumer," and has in other incarnations been a standup comic and a writer for "Saturday Night Live." She is beautiful and successful. She's also a woman who can — and does, in her funny, brutally honest first book, "You'll Grow Out Of It" — admit to feeling like "dogshit" on a red carpet and to thinking about Gwyneth Paltrow "all the time and sometimes… right before I go to sleep," and devote an entire chapter of her work to multiple entreaties to "Get the Epidural" because, as she explains, "No one ever asks a man if he's having a 'natural root canal.'" She is smart and eminently grownup and so refreshingly devoid of BS it's hard not to feel hungry when you get to the last page of her book (due out Tuesday).

Fortunately, she spoke to Salon via phone recently and gave us a little more of her wisdom, humor, and solid advice about getting the epidural.

Why did you decide to write a book? What drew you to memoir?

Part of it was that I didn't think I was writing a memoir. I see why people look at it that way, but in my head that's not what I was writing. I was like, "Oh, i'm just going to write these funny essays and some of them are about me, and some of them are more observational," but I didn't feel like I was sitting down to do an accounting of my entire life. If you were to ask me today, "Do you want to write a memoir?" I would say no.

And yet there's a lot of really intense, intimate stuff in there about dirtbags you dated and trying to get pregnant and other really personal things.

My very honest answer is that it was a combination of trying to sort things out for myself, but also that maybe I can make other people who are going through something similar feel less alone.

There is an entire culture in dealing with infertility issues. I spent a relatively short time in it, because people spend years and years in it. But it was painful in many ways, and at times funny, and at times embarrassing. There are so many forums and books and Web sites where people are sharing the pain they're in and everyone's kind of looking for reassurance — and that is all good. But I never found anyone talking in a tone of voice that I totally related to. Even though I felt deeply upset and deeply sad, I still wanted to laugh at it. And I was of two minds about having a kid. I didn't sense from anyone else that there was a permission to think, "Well, I guess if I didn't have a biological kid, it'd be okay." Maybe I felt that way and maybe other people don't feel that way. I just missed humor in dealing with it. At the same time, I had many days I felt totally humorless about it. I don't mean to be judgmental of anyone going through that. It's horrible. And the secret of the Internet is that very few people come back to tell the good news. So I always heard the saddest stories.

One thing I really hated the most when I was going though it was that lots of people would say, "Don't worry, it'll happen." I was like, actually, I don't know it'll happen. I personally know lots of people for whom it never happened, despite trying things I never even had to go through. I felt like what would make me feel really better was for someone to just be comforting and be with me in the discomfort.

I do love Anthropologie. I make my living writing comedic things but my personal sensibility — a lot of what I consume in terms of TV and books is stuff that's actually pretty dramatic. I enjoy things most when they're both, because I feel both all the time. I'm able to do what I do in part because I grew up with a sense of humor being a coping mechanism through which I see the world. I'm also coping with feelings that are pretty dark. It's about making people feel understood and less alone. The things we're most scared of being alone with are sadness or isolation of some kind, and it's important to know that other people are feeling it too.

Right — sometimes you go on social media or look at your friends' Facebook pages and you feel like everybody else is crushing it. You get this distorted sense that everybody else is having this amazing experience in life and you're the only one struggling with heartbreak or frustration. That's why I wanted to ask you about the "Dogshit" chapter.

That's one of my favorite chapters in the book. I'm 40. I'm old enough to know that when you talk to anyone that everyone's pretty miserable. There are wakeup moments that you have as you go through adulthood where you realize you never know what's going on. But I feel bad for people who are growing up on social media, where it's this constant bullshit parade of images.

Speaking of growing up, my favorite three words in the whole book are, "Get the epidural."

Yay! If there is one thing that comes out of this book that I want to have a life outside, it's for that chapter to be dispersed. And I know it'll make so many people angry and I think that's, for me, good.

This cult of competitive motherhood is really bad.

I hope that this is the flip side of the Internet's "Everything is amazing." I do feel like there is a movement of private groups where moms are really sharing, "Oh, it's a shit-show." People are really open, and it's great when they're open about how hard it is. People just go on at 2 in the morning and they're like, "I'm really struggling." I really struggled, and I still really struggle.

I also feel lucky because I'm in a culture where I'm friendly with a lot of people who share similar views on how much bullshit there is around competitive motherhood. But I recognize that's probably not most people's experience. There's pressure on all women that's absurd.

It's like what you talk about in the book about Anthropologie. I want to live in Anthropologie, but my life is like Sears.

I don't relate to a lack of vulnerability. I probably felt differently about it at one point in my life and now I feel pretty fiercely committed to sharing all of those moments that are less than perfect. Perfection is always a lie.

Relatedly, no one has ever summed up how I feel about Gwyneth Paltrow better than you have.

She is at the center of everything we have been talking about. She's a person and she is a human being who is infuriating but she's clearly been though painful things in her life. I do think about her more than is sane. I wish I looked like her. I think she's super beautiful. I think she's a really good actress. But I do not know her. She does, as someone who's been a GOOP reader from the beginning, seem like this woman does feel this really intense pressure to be perfect in a way that explodes your mind. I definitely have a lot of questions for her.

So what is your next adventure after this book?

I had a crazy year. I won't say it was a bad year; there were things that were great and things that were bad, but it was really full on. In a weird way, the book is coming at a moment when some of the stuff is settling down. I kind of want to not know the next thing. I'm in the stage where I just want to lie around and dream a little bit. If I could just be carried around on the shoulders of the epidural crowd, I'll have achieved everything I set out to do.