Politicians run the police state: They declared the war on crime that sends cops into battle

As long as Americans continue to consider mass incarceration a worthy policy, abuses are guaranteed to occur 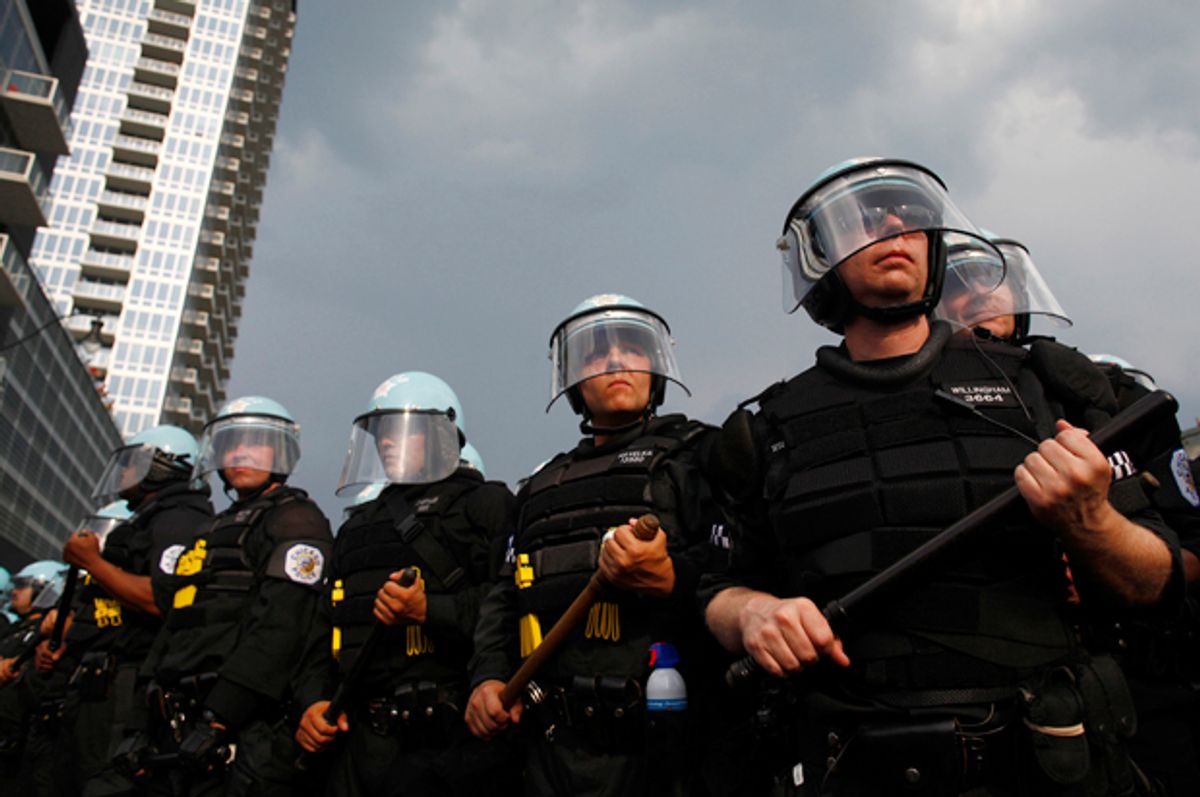 It’s not hyperbole to say that Eric Garner was choked to death in significant part because Mayor Bill de Blasio, like his predecessors, orders police to crack down on so-called quality of life offenses. Similarly, cops stop and frisk because they must answer to lieutenants, who must answer to captains, who must answer to chiefs, who must answer to mayors who have futilely pledged to the public that police will reduce violence and disorder — real and oftentimes horrific problems stemming from an exclusionary economy over which cities have limited control.

Elected officials in statehouses and Washington, however, are the ones who shortchange public education, impose and legitimize class and racial segregation, and facilitate the redistribution of wealth to the super rich. They instead invest money in police and prisons, and pass laws that require sentences harsher than those that prevail almost anywhere on earth. The upshot is a system of mass incarceration that locks up an estimated 2.2 million people and a police state to feed it. President Obama presents himself as a mediator between police and the public; yet despite some important reforms, he presides over a network of federal prosecutors that incarcerates tens of thousands each year. Baltimore State’s Attorney Marilyn Mosby, celebrated for charging the officers involved with Freddie Gray before his death, also apparently made the request for police to flood Gray’s corner with enforcement in response to complaints over drug dealing.

As long as American citizens, and not just white ones, continue to consider mass incarceration to be a price worth paying for public security continued abuses are guaranteed to occur.

Cops are the front door to the carceral state, simultaneously charged with solving problems made by large and complex forces and hated by a public it abuses in an always-failing effort to do so. Many cops merit opprobrium on a personal level for being abusive, and policing as an institution is guilty for its complicity. But police violence is an inevitable outcome of wars on drugs and crime that were made by politicians, and that have been ratified in their various components by the U.S. Supreme Court.

The abuse and impunity rampant in American police departments could to an extent be mitigated by policies within those departments. Tactical models favoring de-escalation could significantly decrease officers’ use of force. Tough and transparent oversight and disciplinary systems, the very reforms fought tooth-and-nail by police unions, could root out officers for whom violent abuse and corruption are the norm. But the solutions to an American criminal justice system that locks up and controls more black American men than were enslaved on the eve of the Civil War largely lie in the hands of the politicians, both Democrat and Republican, who bolster white supremacy and mass immiseration on behalf of the rich, major corporations and banks.

Police and prison, along with the military, are exceptions to a public sector starved of resources. Police officers are the public servant ordered to deal with social problems ranging from domestic violence to gunfire. That job is impossible and abuses are inevitable—an inevitability that toxic department cultures makes worse.

Politicians order police to use arrests to repair the South Side of Chicago and North Philadelphia, who are then criticized for doing so. Drug dealers and rampant gun violence foment a public outcry and pressure on mayors, and police, to do so something. They then do something. The consequences are plain to see.

I’m a reporter who covers and investigates police abuse. Thoughtful individuals in law enforcement have reached out to thank me for my work. There are some good apples in law enforcement. There are some very rotten ones too. But the apple metaphors obscure more than they reveal. Yes, it appears that a seeming minority of officers receive a large number of complaints. But too many of those cops who are not abusive are not only content to look the other way but to lie as well. And the toothless and non-transparent disciplinary systems, humming along with elected officials’ blessing, is complicit.

When Rodney King was viciously beaten by LAPD officers in 1991, other cops stood back and seemingly did nothing. When Chicago Police Officer Jason Van Dyke shot teenager Laquan McDonald sixteen times in 2014, multiple other officers present seemingly lied on their reports, falsely claiming that McDonald had moved aggressively toward police with a knife. The institution appears to have looked the other way too: Van Dyke was named in 20 civilian complaints but never disciplined.

But more than institutional, the problem is structural. Policing as it currently functions serves the ends of a state attempting to manage and discipline a large number of poor people, disproportionately people of color, who are denied the civil right to due process and the social rights to a quality education, well-paying jobs, affordable housing, and a functional public infrastructure.

Even a hypothetically non-abusive police would still make widespread arrests, leading to aggressive prosecutions and lengthy sentences. Even if every arrest were handled seamlessly, with suspects handcuffed and politely warned to watch their head before being placed in the squad car’s back seat, the American criminal justice system would remain an unprecedented monster.

“I no longer believe that we can ‘fix’ the police, as though the police are anything other than a mirror reflecting back to us the true nature of our democracy,” Michelle Alexander writes. “We cannot ‘fix’ the police without a revolution of values and radical change to the basic structure of our society. Of course important policy changes can and should be made to improve police practices. But if we're serious about having peace officers — rather than a domestic military at war with its own people— we're going to have to get honest with ourselves about who our democracy actually serves and protects.”

A carceral state that requires aggressive policing and excessive arrests will continue to engender abuses, and it will continue to feed the beast. Ending mass incarceration, and repairing socio-economic exclusion through nonviolent means, requires political will that so far is not forthcoming.