How a Trump-Pence presidency would be dangerous for the press 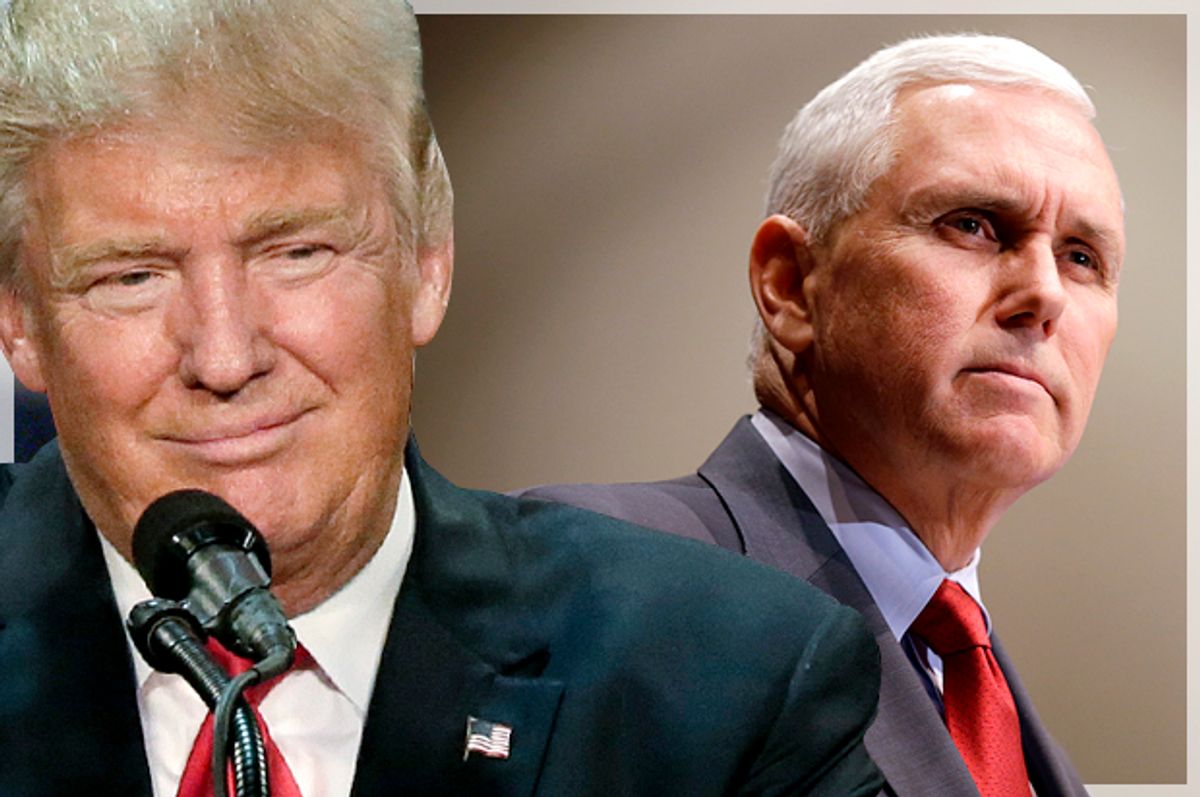 Republican presidential front-runner Donald Trump does not like the media, to put it mildly.

"I've been dealing with the press a long time. I think the political press is among the most dishonest people that I've ever met," Trump has said.

"Most of it, 70 percent, 75 percent is absolute dishonest, absolute scum," he declared in a campaign speech, stressing the word "scum" several more times.

Trump has gone so far as to ban numerous prominent outlets from reporting on his events, including The Washington Post, POLITICO, The Huffington Post, The Daily Beast, Univision and BuzzFeed.

In the past, Trump has also sued journalists for their coverage. Biographer Wayne Barrett even accused Trump of threatening and bribing him.

While Trump's track record with the rights of journalists is virtually all negative, one of the top candidates for his vice president, Indiana Gov. Mike Pence, has a decidedly mixed record on press freedom.

Pence, a staunch right-winger and a proud member of the Tea Party movement, has spoken strongly in support of the freedom of the press. He previously worked in the media, in fact.

In the '90s, Pence was the host of "The Mike Pence Show," a syndicated radio talk show. He also hosted a Sunday morning political television show in Indianapolis.

After his stints in the media and as the president of the right-wing, ultra-capitalist think tank the Indiana Policy Review Foundation, Pence ventured into politics. From 2001 to 2013, he was a member of the House of Representatives, and was named as a potential Republican presidential candidate in the 2008 and 2012 elections.

During his time in Congress, Pence earned a reputation as an advocate for press shield laws that he said would protect journalists.

When it comes to press freedoms, therefore, some might portray a Vice President Pence as a counterbalance to a President Trump. But this is not quite the whole story.

Supporters of Trump and Pence may point to his history of defense of press freedoms, but Pence has made large exceptions for national security reporters, the most vulnerable and endangered journalists of all.

Despite his hard-line conservative bona fides, Pence criticized the Bush administration for its crackdown on journalists. In a 2008 op-ed in The Washington Times, then-Rep. Pence warned, "today the free and independent press in America is under fire."

The rights of freedom of speech and the press "form the bedrock of our democracy by ensuring the free flow of information to the public," he wrote. Pence also called a free and independent press "the only check on government power in real time."

Yet in previous years, he noted, more than 40 journalists had been subpoenaed, questioned or held in contempt for failure to reveal their confidential sources.

Pence defended the rights of journalists to assure confidentiality to their sources. "Being forced to reveal a source chills reporting of the news and restricts the free flow of information to the public," he said.

The Indiana congressman wrote in support of the Free Flow of Information Act, legislation that has been reintroduced several times in Congress in an attempt to implement a national shield law.

All 50 U.S. states have media shield laws that ostensibly offer some kind of protections for journalists, but the federal government has not enacted any such protections.

President George W.  Bush opposed the Free Flow of Information Act, but Pence joined lawmakers in both the Republican and Democratic parties in support of the legislation.

The legislation had serious flaws, however. It made large exceptions for national security reporters — that is to say, the journalists who make up the vast majority of those targeted in government crackdowns.

In his justification for the bill, then-Rep. Pence boasted of these exceptions. He noted the Free Flow of Information Act had strong bipartisan support precisely because it added exceptions for national security.

The legislation only guaranteed qualified reporters' privileges, meaning journalists would be required to disclose their sources if the U.S. deemed their stories to be of harm to its national security.

It also gave judges a right to determine whether it is in the "public interest" for journalists to disclose their confidential sources.

Trevor Timm, co-founder and executive director of the Freedom of the Press Foundation and a former activist at the Electronic Frontier Foundation, stressed that "virtually the only time the government subpoenas reporters, it involves leak investigations into stories by national security reporters."

Not only would the Free Flow of Information Act not help the journalists who are actually being subpoened, he explained, "it would actually make it easier for the Justice Department to subpoena journalists covering national security issues."

Timm emphasized that the U.S. federal government does need a shield law, but a much better one.

Pence's double standard on this issue is by no means uncommon. President Barack Obama repeatedly expressed support for a shield law before he was president, but, once he entered office, he opposed all shield law legislation that did not make an exception for all national security reporters.

Obama went on to use the World War I-era Espionage Act to punish whistleblowers who leaked to journalists more than all previous presidential administrations combined.

New York Times reporter James Risen, who faced years of legal threats from the U.S. government for his national security journalism, called the Obama administration "the greatest enemy of press freedom in a generation."

In a recent interview, said Obama's attacks on journalists and whistleblowers are "unprecedented in modern American history."

Pence may rhetorically support the freedom of the press, but he joins myriad other U.S. politicians, including President Obama, in making an exception for the very journalists who are the most negatively impacted by attacks on press freedoms.

This hypocrisy is not the only sign that a Trump-Pence presidency could be horrible for press freedoms.

The website would feature news stories and press releases that were literally written by state press secretaries to be distributed in the media.

This news led to backlash from journalists around the country, who characterized it as a chilling attempt to curate government propaganda and a sign of a brave new world. (The U.S. federal government does, however, already have state-run media outlets, including Voice of America.)

Pence criticized the reports, claiming they were based on "an understandable misunderstanding." He claimed the site was "meant to be a resource, not a news source," the Associated Press reported.

"I have great, great respect for the role that the media plays. I've been a champion of that throughout my career and will make sure this website reflects that proper role," Pence said.

Supporters of Pence and others will point to comments such as these. They will also note that, as a congressman, Pence opposed the Fairness Doctrine, a post-World War II-era policy by which the Federal Communications Commission required broadcasters to discuss controversial issues in a way that it considered to be balanced. (FCC commissioners struck down the Fairness Doctrine in 1987, in a bipartisan vote. The language implementing it, nevertheless, was not removed until 2011.)

Pence has earned some of his reputation as a First Amendment advocate, but he has joined many U.S. politicians in making serious compromises.

Donald Trump makes his contempt for journalists, whom he repeatedly calls journalists "dishonest," absolutely clear. Compared to Trump, it is easy to look like a press freedom advocate. Yet, while Mike Pence has a better reputation on journalism, but this may not be warranted.

Salon contacted Pence's office, asking what his views on press protections would be as a potential vice president. His office did not immediately respond to the request for comment.