I can't bear to watch HiddleSwift: The public spectacle of love-tweet-delete is just too much 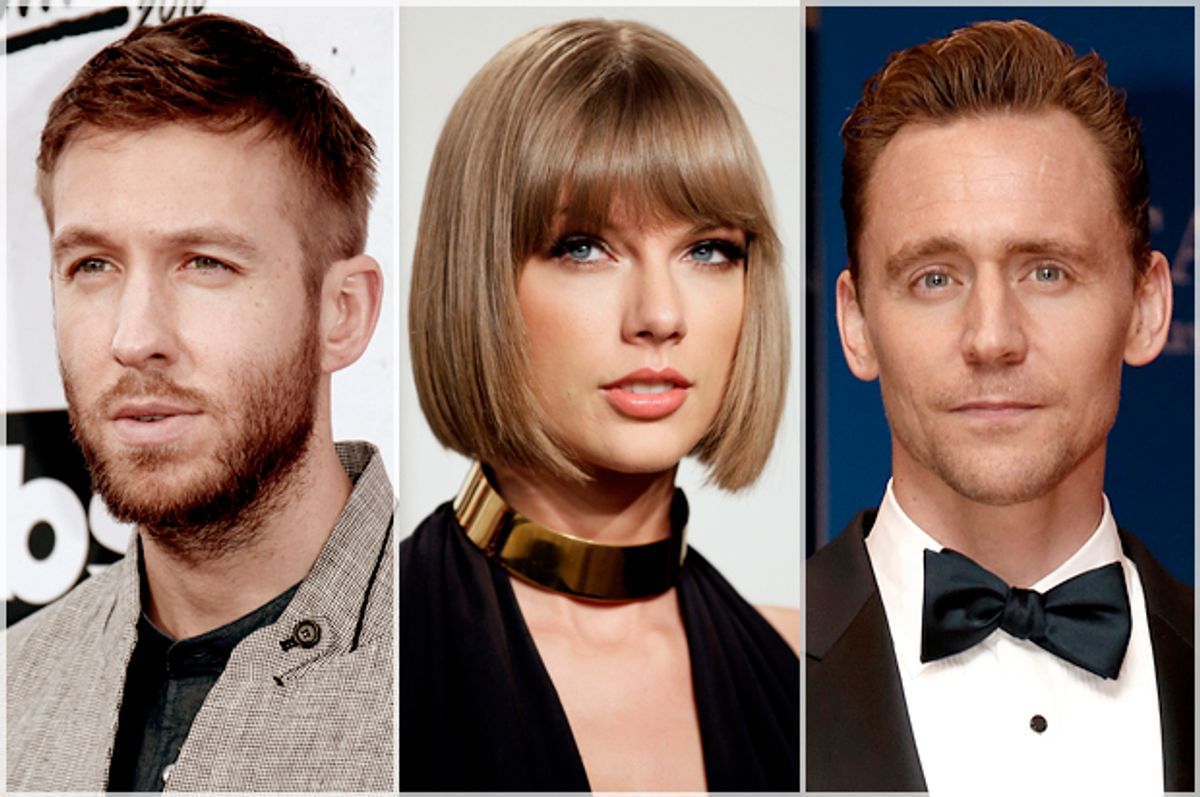 There are certain inevitable aspects of online life that are guaranteed to stress an individual out, to cause an elevated heart rate and tiny beads of sweat to appear above the upper lip. For me, they are: any post with more than two hashtags, the sight of someone else's phone teeming with bright red, unread texts and emails, and primarily, happy photos of celebrity couples. If one half of that celebrity couple is Taylor Swift, multiply the cringe factor by about four.

I should admit here that I probably know more about Taylor Swift and her personal life than is healthy. (Do I get a pass for having school-aged daughters? Because I also know A LOT about Ariana Grande too.) I should also say that I am generally Team Taylor. She's a talented songwriter, a multiple Grammy winner. She posts adorable pictures of her cookie baking endeavors. And frankly, I could teach an entire course on Female Sexual Agency in the Age of T. Swift, because her unapologetic and expansive dating history is pretty impressive. The list of rumored and confirmed conquests is on a DiCaprio level. Not bad for a small town girl from Pennsylvania. I just don't want to see it.

I have zero interest in decoding what went down between her and Calvin Harris to cause the poor guy to have a Twitter meltdown accusing her of "trying to tear your ex bf down," nor do I care a bit that Tom Hiddleston feels the need to affirm their romance is "not a publicity stunt." I also have also spent the past few years desperately trying to avert my eyes every time I've seen a lovey-dovey photo op with Swift and her latest paramour. I can't tell you how relieved I was to have been out of town when those Fourth of July weekend pictures from Rhode Island broke.

Swift is not the only public figure with a scrupulously documented romantic life. And maybe I'm just a cynic, but there's something about seeing almost any seemingly happy famous couple — other than maybe Catherine and William, because I think those kids are going to make it — on social media that makes me immediately wonder if they're going to regret those someday. I just want Chelsea Peretti and Jordan Peele and Chrissy Teigen and John Legend to be in love forever, okay? I still haven't forgotten about when Russell Brand wrote that whole beautiful chapter in his memoir about how much he loved Katy Perry and then the next thing you knew she was at the Grammys, single and singing songs about some unnamed garbage monster ex. Or when Gwyneth Paltrow said that marrying Chris Martin was the "best decision" of her life — right before consciously uncoupling from him.

Life is full of change and relationships don't always last. There's nothing unusual about a young person having serial partners, or of taking pictures with said partners. What's unnerving about celebrity social media is the intensity and suddenly all-in approach that some stars seem to have to sharing their love with the world — and then the aggressive backtracking on their past.

Last month, as their relationship went up in smoke, both Swift and Harris went on a deleting spree, scrubbing old tweets and photos from their accounts. Buzzfeed reported in June that Harris had deleted every photo of Swift from his Instagram, and she selectively obliterated him as well — the photo of the locket he gifted her with on their one-year anniversary, that iconic, so perfectly set up piggyback ride pic from just last Fourth of July. It lives on in our hearts, Taylor, it lives on!

Deletion somehow makes real events, real relationships, seem disposable, and there's a hollowness to that approach that can't be easily clicked away.

Taylor Swift has survived, in different ways, Kanye West and John Mayer; she is made of very strong stuff. She doesn't care about anyone's judgment of her life choices or of her eagerness to share said life choices with millions of followers. She'll be fine. But when I see those well-curated and disseminated photos of Tom Hiddleston on Instagram and elsewhere, merrily partying on Taylor Swift's water slide, I just wonder how much more awkward they'll seem in a few months — or whether they'll even still exist at all.