Does the Trumpence nightmare coalition have a chance? Yeah, because it's 2016 and chaos reigns

Will Trump's alliance with the worst aspects of GOP orthodoxy finally undo him? Halloween comes early in Cleveland 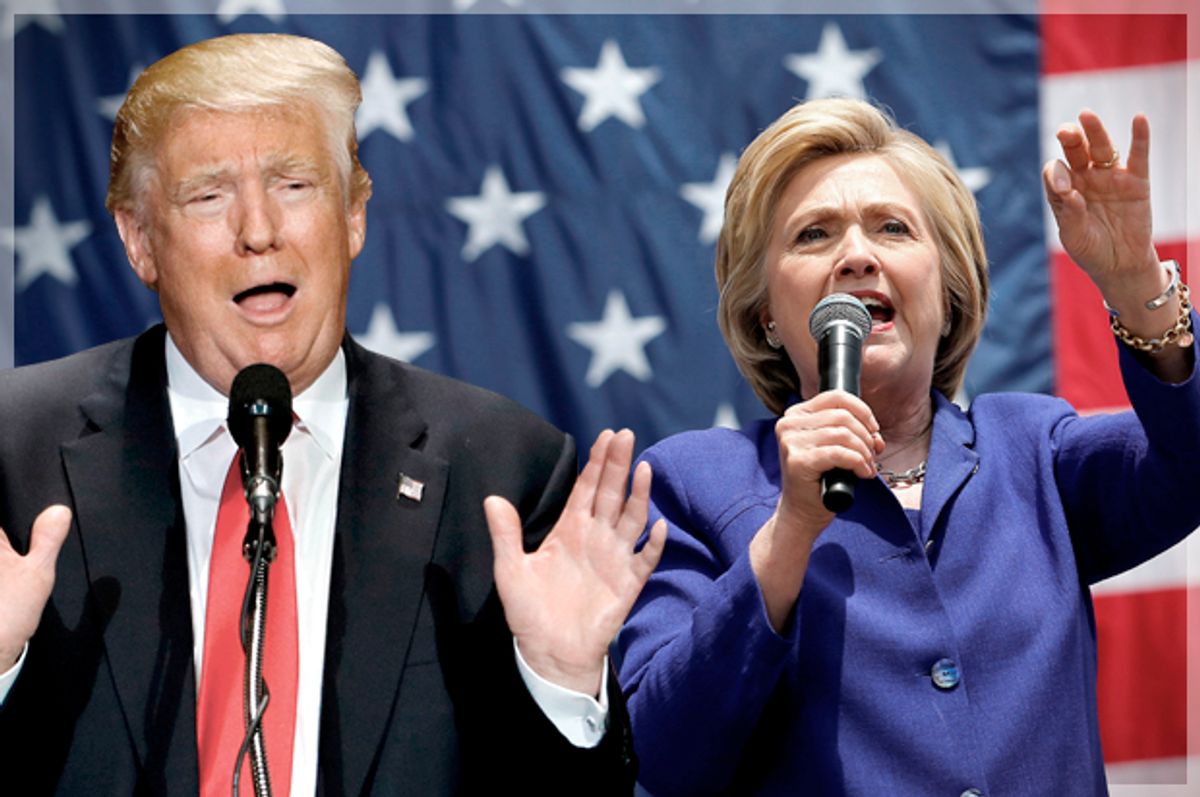 So here we are, at a major pivot point in the unfolding narrative of America’s Stupidest Election Ever. (Admittedly I haven’t gone back and taken a hard look at “Tippecanoe and Tyler Too.”) Our two major political parties head into their conventions with two deeply flawed and widely disliked candidates, who despite their divergent styles and opposed positions come from the same elite caste in American life, and have known each other for years. There has been yet another presumed or probable terrorist attack in France, a gruesome event whose timing in terms of the American presidential election was coincidental, but whose symbolism was not. If the deranged Islamic radicals of Europe don’t actually support Donald Trump, they are nonetheless doing their damndest to get him elected.

Halloween comes to Cleveland a little early this year. Trump will accept the Republican nomination next week and so align himself (if only hypothetically) with a ludicrous platform crafted by party activists apparently coughed up by the 1988 Pat Robertson campaign. Beyond incorporating Trump’s famous wall and dropping all references to the GOP’s traditional free-trade agenda, it has almost nothing to do with the guy at the top of the ticket. The Republican platform won’t be final until delegates adopt it, but it has already made headlines for going “Back to the Future” in spectacular fashion on a whole range of social and cultural issues, mostly things Trump conspicuously doesn’t care about. Not merely has the GOP base rejected the more inclusive approach recommended by party chair Reince Priebus’ “autopsy” commission after the 2012 election, it seems to have embraced the most hard-right social vision in recent American history.

Abortion must be outlawed by constitutional amendment, according to the GOP platform, but at least that one is nothing new. Same-sex marriage also must be undone by the same mechanism, despite the fact that most of the country — Donald Trump included — has clearly accepted the new reality and moved on. Transgender rights are specifically rejected. Legislators are urged to use religion as a guide, although it’s a safe bet that only some religions are acceptable. The Bible should be taught in public school, and judges should respect “traditional family values.” Pornography is defined as a “public menace,” parents should be free to seek “conversion therapy” for LGBT children and a theory is advanced that the offspring of “natural marriage” between a man and a woman are less likely to become substance abusers. Change a couple of proper nouns and ISIS would endorse the whole damn thing.

That goes way beyond trying to lose the 2008 and 2012 elections all over again (and worse), but with more enthusiasm. This is like trying to lose the 1884 election in some alternate universe scripted by Neil Gaiman, or the election in “The Purge: Election Year.” The only reason there isn’t something in there about outlawing the teaching of evolution or stoning adulterers in public is that they didn’t get around to it. Dare to dream, people! There’s an entire week of ideological contact-high and lakefront BBQ ahead of you. You’ve still got time.

One could make almost the same observation in reverse, with a lower degree of cognitive dissonance, about the relationship between Hillary Clinton and the Democratic platform. Whether this represents a strategic shift or just a rhetorical bone being tossed to Bernie Sanders and his supporters, Clinton has abruptly chosen to embrace numerous issues she resisted during the primary campaign: A $15 minimum wage (at least in theory), free tuition for in-state students at public colleges and universities, an expanded “public option” to fill the Obamacare gap. At the very least, the stark contrast between the two party platforms and the worldviews they espouse should remind people who take a deeply cynical view of our paralyzed bipartisan system — people like me, to be fair — that it is not entirely devoid of ideological substance.

If the party platforms meant anything, and if the 2016 election were actually being conducted as a somewhat conscious and coherent debate on the issues, it would be a slam dunk. But as my elderly Scandinavian landlord used to say, if his grandmother had wheels she’d be a wheelbarrow. Elections are almost never about stuff like that and almost always about emotion and symbolism. (Brexit being a recent case in point.) And I’m not sure it’s fair to blame the voters for that, or at least not entirely. When you look at Trump and Clinton, two of the slipperiest people ever to run for high office, you can only conclude that their purported positions on almost everything must be taken with immense blocks of salt, and that what either of them would actually do as president remains a mystery. Which variety of disturbing enigma do you prefer: Orange-hued reality-TV blusterbox or steel-jawed Ladytron?

As this week’s disturbing poll numbers showing Trump and Clinton dead even in several swing states should remind us, nothing is certain and the only safe bet in 2016 is to expect the unexpected. I’ll be in Cleveland this coming week, along with my colleagues Sean Illing, Amanda Marcotte and Ben Norton, and about half the Western world’s press corps. (Most of us will reconvene in Philadelphia the week after that, with considerably lower expectations.) What all that cumulative pontification will do to the atmosphere during a sweltering summer week in northeast Ohio I have no idea. Nor do I know what the Republican National Convention will actually be like, inside and outside Quicken Loans Arena, No, seriously — Quicken Loans Arena! You can’t make this stuff up.

As for what this year’s GOP convention will mean, in the somewhat longer arc of American political history, we won’t learn that next week or for quite a while thereafter. Will Cleveland 2016 be an epoch-shaping event, like Chicago 1968 or Houston 1992? Or an anomalous blip that is soon forgotten? Do you remember anything about the John Kerry Democratic convention of 2004? I’m already sorry I brought it up.

It’s tempting to overpredict this year’s Trump-Pence Quicken Loans fiesta, and to heap too much significance on what is usually a stage-managed event that for once feels charged with weirdness and danger. Speaking of which, are those two syllables, Trump and Pence, vaguely salacious when put together? Trump-Pence. Trumpence. It has a naughty Victorian flavor: The tuppence you use to pay a strumpet is a Trumpence.

If Donald Trump has an Achilles' heel — well, we know it’s not his propensity to say outrageous and offensive things. But he gets less and less comfortable as he gets dragged back toward normal political strategies and orthodox positions, and we can feel that happening a little. I find myself surprised that Trump actually picked Mike Pence, because the Indiana governor is such a boring and predictable choice, and you can’t accuse Trump of being either of those things. If Pence represents a victory for “politics as usual” within the Trump camp, which seems to be the predominant media spin, it’s pretty much the first. I’m halfway persuaded by the MSNBC truther theory that Trump spent Thursday night trying to undo the decision. Trump hates measured, stealthoid, two-faced conservative dudes like Mike Pence. Running with a fatuous pseudo-intellectual like Newt Gingrich or a pompous blowhard like Chris Christie is much more his style.

I don’t imagine Trump gives a crap about what the Republican platform says, or is likely to read it. Written by politicians! Sad! But by attaching himself to Pence and to the most delusional, crazy-town fringe of the Republican right, Trump has leapt right over the so-called mainstream of the Bush family and Mitt Romney and Paul Ryan and reforged the GOP as a nightmare coalition of the very worst kinds of Americans. I’m not letting the supposedly normal, grownup Republicans off the hook — they are the next worst kinds of Americans. It was their pandering and hypocrisy and consumer-grade evil over the past couple of decades that made this all possible, and the fact that they have to spend this week sulking at home atop their piles of money is a better fate than they deserve.

All of that should mean doom for the Republicans in 2016, and it might. There’s a seductive argument that the Trumpence convention, which so many mainstream Republicans are skipping or ignoring — John Kasich, who is the governor of Ohio, has apparently decided it’s too difficult to travel the 145 miles from the state capital in Columbus to his state’s largest city — will be an enormous clusterf**k. That it will reveal the diseased Republican soul to the world, and bring the final moment of self-immolation for a psychotic and self-destructive party that has flirted with Götterdämmerung for decades. But in case you hadn’t noticed, nothing this year has gone according to plan or obeyed the dictates of conventional wisdom. I think it’s just as likely that the neo-Republicans come charging out of Cleveland high on whiteness and stupidity and deep-fried Sriracha wings, and believing they can win.