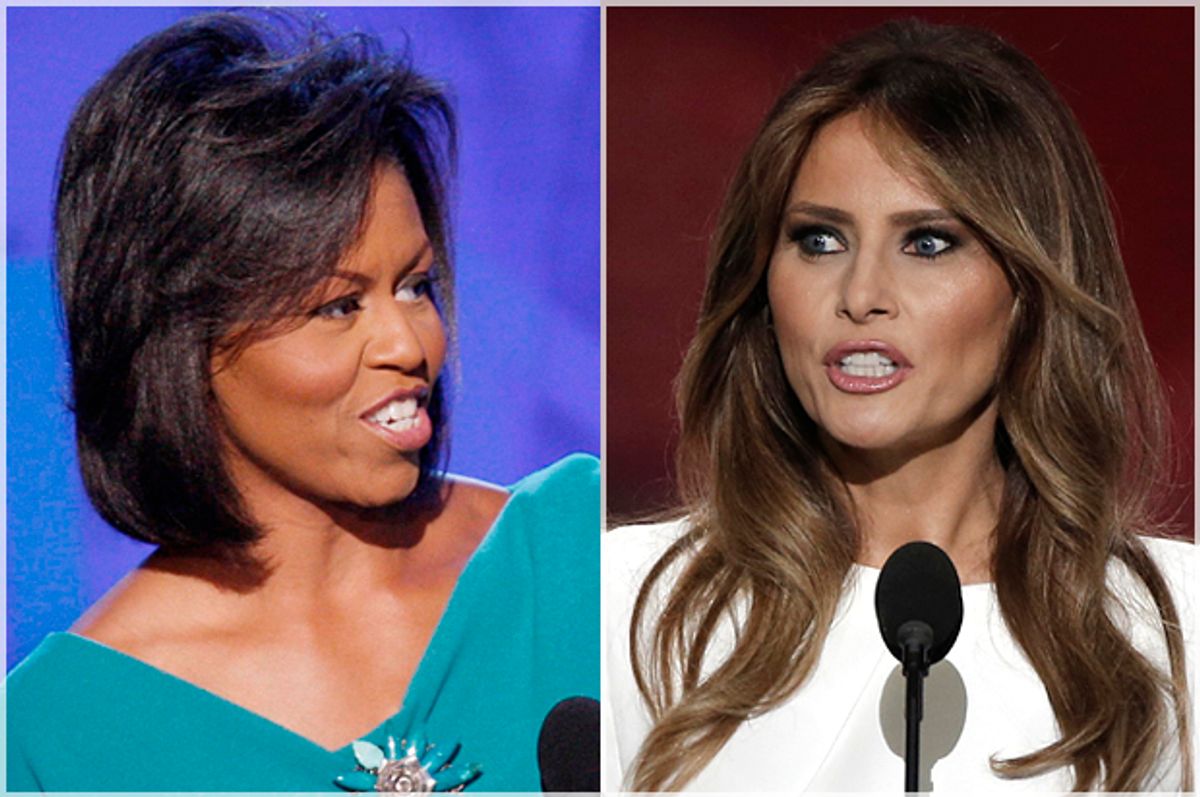 It's hard to feel exhausted and overwhelmed. I fully get it that at a moment in our nation when we are dealing with mass shootings, systematic racism and and a war on women's reproductive rights, and a Republican party platform that condones child abuse in the form of gay conversion therapy, anything that Melania Trump might have to say feels like a low-priority problem. But what happened Monday at the Republican National Convention deserves attention regardless. And the cynicism that led to such a blatant act of public plagiarism cannot be met with more cynicism from us.

Earlier on Monday, the Trumps spoke to Matt Lauer, with Mrs. Trump saying of her convention speech, "I wrote it with as little help as possible. I'm excited." But as keen-eared journalist Jarrett Hill first noticed, when the 46-year-old ex-model and aspiring First Lady of the United States of America took to the podium on the initial night of the convention, she seemed to be channeling the woman who currently holds that title. Borrowing freely from Mrs. Obama's address at the 2008 Democratic National Convention, Trump repeated nearly word for word a key passage on — IRONY ALERT! — being raised with "values that you work hard for what you want in life, that your word is your bond and you do what you say" and an assurance that "the only limit" to your dreams is "your willingness to work." Oh man. That is rich. Bless her heart, she also Rickrolled a nation, vowing that her husband "will never, ever give up" and "never, ever let you down."

The Internet community soon made hay with the speech, with the hashtag #MelaniaTrumpFamousQuotes quickly trending, and commenters expressing pleased surprise she at least remembered she isn't Sasha and Malia's mom. Yet the Trump circle itself didn't seem concerned at all. On Monday night, former chairman of the California Republican Part Thomas Del Beccaro declared, "MelaniaTrump proved tonight she is total opposite of #MichelleO. No anger. No complaints. Just about what can happen through opportunity." Rejected bridesmaid Chris Christie, speaking on "Today," estimated that "93 percent of the speech is completely different from Michelle Obama's speech."

Trump's campaign manager Paul Manafort, meanwhile, cleverly blamed Hillary Clinton for the controversy, saying, "There's no cribbing of Michelle Obama's speech. These are common words and values — that she cares about her family, things like that. She was speaking in front of 35 million people last night; she knew that. To think that she would be cribbing Michelle Obama's words is crazy. This is once again an example of when a woman threatens Hillary Clinton, how [Clinton] seeks to demean her and take her down." And he added, "To think that she would do something like that, knowing how scrutinized her speech was going to be last night, is just really absurd."

It really is, sir. It really, really is.

On CNN, Republican National Committee Chief Strategist & Communications Director Sean Spicer explained that Mrs. Trump's speech was also recognizable to those familiar with the words of Twilight Sparkle from "My Little Pony" — "Anything you can do in your dreams you can do now." This really happened on American television.

Spicer said, "It's sad that we've taken this amazing moment with the world introduction of Melania Trump and allowed the Clinton campaign to say, 'We Googled a bunch of phrases and matched it up with three things Mrs. Obama said." For context, The Washingtonian's Amanda Whiting reported that they'd run the excerpts in question through a plagiarism checker at Small SEO Tools and found that "the program noticed a level of similarity far beyond the usual coincidences that may occur in writing, including one passage with 23 matched words. The program estimates that the "likelihood that a 16-word match is 'just a coincidence' is less than 1 in a trillion."

Lifting liberally from other sources is unfortunately not uncommon. Three years ago, Rand Paul gave a speech in which he bafflingly seemed to be quoting directly from the Wikipedia page for the movie "Gattaca." In 1988, Joe Biden was revealed to have borrowed heavily from the speeches of British Labour leader Neil Kinnock for his own folksy origin story. And hey, self-plagiarist and outright quote faker Jonah Lehrer is back. And in the farce that is this entire election year, where conservatives are doing just fine coming up with shocking content that's completely original, it might be easy to brush off Mrs. Trump's behavior as a punchline. Earlier Tuesday, a former colleague publicly described the incident as not "a big deal."

But it should be a big deal when a woman who seriously wants to be the First Lady gives a speech about morals that was stolen from someone else. It should be a big deal when an entire campaign laughs off its poaching of the ideals of its opposition, when it appears to be counting on nobody caring about a shameless ethical transgression. On Monday, Mrs. Trump spoke of hard work, and of treating others with respect. And if anyone at the Trump campaign actually knew what those words meant, maybe they would have mentioned that Michelle Obama said them eight years ago.