Storm clouds over Philly: Does the DNC's unsettled mood spell doom or democracy?

The Schultz scandal, a Sanders rebellion, Putin, the polls—trouble is in the air for Democrats after Trumpapalooza. 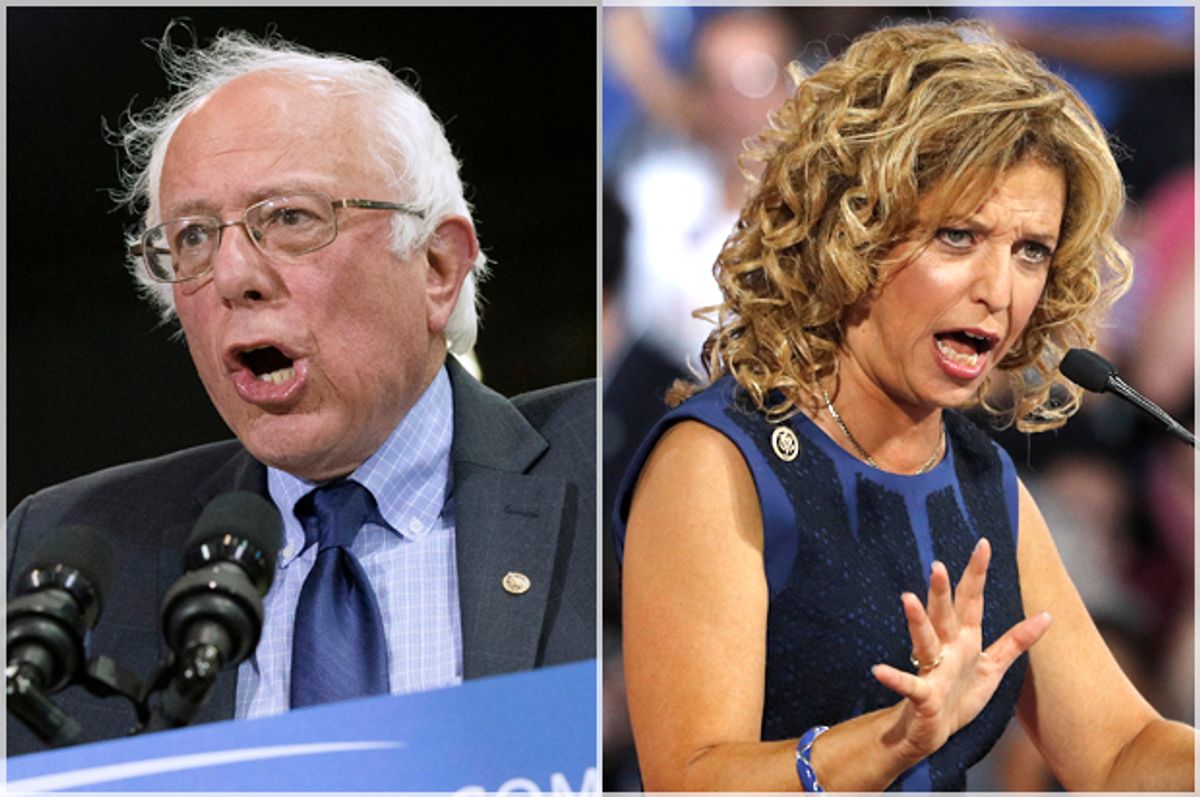 PHILADELPHIA -- If you couldn't hear the gavel come banging down on the 2016 Democratic National Convention this afternoon, perhaps it was because the sound couldn't penetrate the cloak of anxiety hanging over the City of Brotherly Love.

It's already clear that the Democrats will run a more efficient and professional operation here then the Republicans did in Cleveland. There's a published schedule of speakers, for heaven's sake, which goes beyond 1970s TV stars and the candidate's immediate family. Policing in Philadelphia has hardly been free of controversy over the years. But police around the convention venues appeared calm and friendly on Monday, and there is little of the martial law atmosphere witnessed last week.

But the summer heat wave is even worse here than it was in northeastern Ohio. Right now that feels like a metaphor, as if an unseen volcano ready to erupt. There is no mistaking the ominous and unsettled mood beneath the businesslike normalcy of DNC Day One.

First of all, whatever genius decided the two party conventions should be stacked right on top of each other this time around, instead of the traditional three or four weeks apart, should immediately be sent to the guillotine. (If that person was Debbie Wasserman Schultz, I guess that already happened.) The media and political classes, and no doubt a great deal of the public, are still reeling from last week's Halloween-in-summer Donald Trump hatefest. As one of my colleagues put it, we needed a little couch time, to ignore the horror of what had just happened or let it soak in or both. Instead we had a disorienting weekend of news-cycle vertigo. Tim Kaine was introduced as Hillary Clinton's running mate three days ago, and I'm not entirely sure I could pick him out of a police lineup. Here, by the way, is the little noticed secret connection between both vice presidential nominees: "Tim Kaine" and "Mike Pence" are clearly the civilian identities of minor DC Comics superheroes.

Then came a wave of predictable but unnerving poll numbers, showing an instant post-convention bounce putting Trump even with Clinton, or slightly ahead. I could make reassuring noises about how all such surveys are vaporware and all polls before Labor Day are nearly meaningless, and that would all be true. At least it would be true in any year where the normal rules of politics applied ... You can see where I'm going with that one.

But the biggest and murkiest of the doom-clouds hanging over DNC Day One, as we await Bernie Sanders' big speech, is about the leaked internal emails that sent party chair Debbie Wasserman Schultz to the chopping block. From the look of things, everyone in all quarters of the party was tired of Schultz's act. When the Sanders campaign demanded her scalp, in response to the thoroughly unsurprising revelation that her office had pondered backstage strategies to help Clinton, the Clinton team was suspiciously happy to oblige.

Where did WikiLeaks get all those stolen DNC emails, and does that matter? I don't know the answers, but those are thorny questions. The FBI has suggested that the documents released on Friday resulted from a hack by the Russian intelligence agencies. It's a plausible claim, or plausible-ish, but here we get into a death zone of New Cold War spin where all such allegations must be handled like sacks of radioactive poop, with extreme caution and distaste. Furthermore, even if that's true, does it matter? Are we supposed to react differently to the content of the leaks? And if so, why? Does it follow, as one pro-Clinton Democrat told me today, that Sanders supporters are getting played by Vladimir Putin, in a deep game meant to bolster Trump?

There is likely to be considerably more open discord here, and more street protests, than in Cleveland. Some Sanders delegates are reportedly planning a convention walkout, something the anti-Trump forces in Cleveland couldn't pull off. That prospect is making some party-unity loyalists dejected; expect to hear the usual clichés about how the left can't escape its circular-firing-squad mentality, even in a time of national emergency. I don't agree: Turmoil in Philly could also be taken as evidence that this stricken and dysfunctional party is just that crucial little bit healthier than the other one. But hell, who knows? Anybody who sounds confident about what's going to happen here -- in Philadelphia, in the Democratic Party, in this election or in America -- is full of crap up to their eyeballs.