The media went AWOL: Members of the press shied away from doing their jobs during RNC coverage

Almost no one in the press acknowledged that regardless of how you feel about Trump, the spectacle was crazy 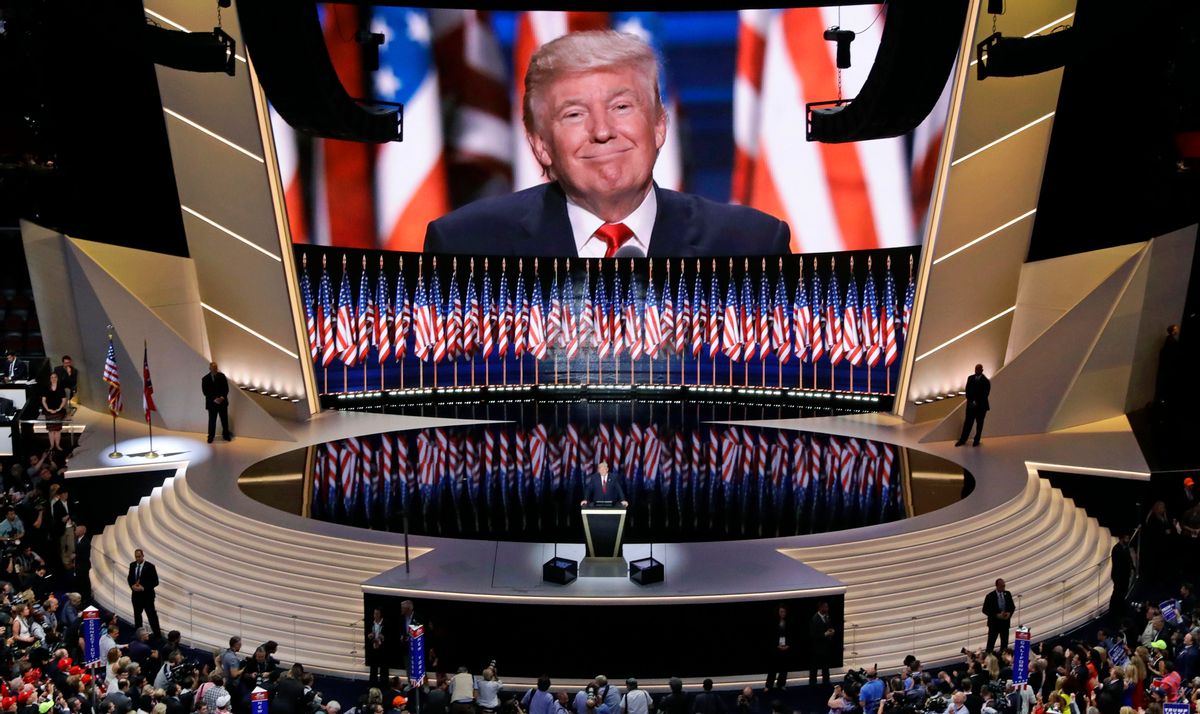 I think the media may have missed the biggest story of the convention — and they missed it because they were at the center of it. Take a step back and consider: A reality TV star who is best known for telling people, “You’re fired!” accepted the presidential nomination of a major party. It is surreal, something that not even Evelyn Waugh or the Philip Roth of "Our Gang" could have concocted, though as Roth once wrote, it is almost impossible these days for novelists to compete with reality.

As outrageous as Trump’s victory is, the media covering the GOP convention have become so acclimated to it that they are acclimating us, too.

Watching the convention was watching the spectacle of the surreal being normalized: the parade of 1980s retreads like Scott “Chachi” Baio and underwear model-turned-actor Antonio Sabato Jr. given prime speaking real estate; the chants of “Lock Her Up!” out of some dystopian sci-fi film where the public runs amok; the spittle-spewing mania of Rudy Giuliani, like some crazed villain from a Marvel picture; the WWE confrontation between Ted Cruz and Trump as the latter entered the arena to step on Cruz’s peroration; the disjunction of a convention with all of 18 black delegates (yes, 18!) while a caravan of black speakers made it seem like the NAACP convention; and, last but by no means least, Trump himself, looking like a grumpy potentate.

None of this is normal, and certainly not Trump himself. And yet, as I switched from channel to channel, I didn’t hear anyone say, “However you feel about Trump, this is just plain crazy.” At most, a pundit might marvel at Trump’s success as a non-politician. But that is far different from wondering how our political process went off the tracks. In an earlier post I wrote that the media’s normalizing Trump, as German media once normalized Hitler, is the biggest danger to the country. Now let me add this: Normalizing the bizarre circus that surrounds him is a danger, too.

Many of the media commentators were enthralled by “The Children’s Hour,” the testimonials given about Trump by his offspring: first Tiffany, then Eric, Donald Jr. and finally, Ivanka.

This is really humanizing Trump, said the pundits of the supposedly heart-warming stories of Trump’s parenting. But to me, a parent myself, I thought the commendations spoke less to Trump’s parenting than to state the media’s own parenting skills and to their disconnect from the real world — our world.

Consider: Tiffany told the story of how, when someone “very dear to me” died, her father actually picked up the phone and called her to console her. Can you imagine that? He picked up the phone. And the pundits thought that was just great. And she told how her father would write notes on her report card and ask after “my family in Georgia,” which I thought a very odd construction. Gosh, my father never asked about my family in...wherever. He was my family, and he never had to write notes on my report card. He talked to me about it. But then, my father lived with me and my mother and brother, not 3,000 miles away with wife and family No. 3.

And consider the praise the kids lavished on their father for always driving them hard, teaching them the value of work, bringing them to construction sites or the office where Ivanka played with Legos while her dad planned buildings. My heart was warmed to its cockles by these tableaux. Except that not one of the kids spoke of their father coming to them — to their recitals or their games or their science fairs. And not one spoke of how he taught them love and fairness and charity and compassion. But my point, again, is that the media didn’t seem to notice these gaps, perhaps because national journalists parent the same way — rich, busy, career-centered folks with little time to engage their children. You want to know why the media may not get it? There’s one answer.

In the Republican version of America, there was no Great Recession, no catastrophic war in Iraq, no Al Qaeda, no crumbling infrastructure, no wage stagnation — until Barack Obama came along.

A small point, perhaps, but in any historical context, a large one: Where was George W. Bush? Of course, I knew he wasn’t going to appear, not only because brother Jeb was vanquished by Trump but because W. is persona non grata among Republicans now. What I mean is: Where was W. historically? The media never mentioned him, not once, which is surprising only because of the odd historicism of this convention. Everything here began in 2009 with Barack Obama’s inauguration. Of course, Republicans have amnesia about the Bush years, and understandably they want us to be amnesiacs too. (It took a generation for Americans to forget Herbert Hoover.) But amnesiacs in the media? There was no attempt to provide any context or corrective to the odd recitation of Democratic sins. Again, I don’t expect an entire convention to be fact-checked, Republican or Democratic. That would require a Talmudic exegesis. But a little history isn’t too much to ask.

There is, inevitably, a conflict of interest in modern campaign coverage, especially coverage of Republicans. Since Nixon, the GOP has made it a prime talking point that the media are in the tank for the Democrats, that Big Media and big journalists are liberals, that the media are also intellectual elitists who hate ordinary Americans whom Republicans extraordinarily conflate with themselves, and that, as a result of all these things, Republicans can never get a fair shake. Because the public seems to hate the media as much as the Republicans do, media-bashing isn’t just a complaint. It is an electoral strategy. Again and again, during the convention, speakers assailed the media. Just before the convention, Newt Gingrich even proclaimed the election a referendum on the press.

The press, however, never acknowledges this, or how it could conceivably affect their coverage. Not once during the convention did I hear a journalist say that this has made the media more defensive or more aggressive or more cowardly or more anything. Even if the effect is subliminal, it is hard to imagine that the constant reiteration of bias doesn’t have some effect. I know this is a longstanding argument, but it is an elephant in the elephants’ convention hall. You can’t just ignore it, though that is exactly what the media continue to do.

As I was skipping from one channel to another throughout the convention, I thought CNN deserved a special shoutout. If you want to see an object lesson in just about everything that is wrong with modern media and you have a very strong stomach, you don’t have to look any further. Forget Roger Ailes and Fox News. (And we soon will forget the first.) CNN head Jeff Zucker is giving Ailes a run for his money as the chief saboteur of professional journalism.

We all remember Jon Stewart going on CNN’s all-fire-and-no-light "Crossfire," ridiculing the program and eventually escorting it to oblivion. So what does Zucker do? He takes the premise of "Crossfire" and makes it the basis for CNN’s electoral coverage. He gives us a panel of advocates for each candidate and party — basically spin doctors — who repeat the familiar talking points again and again and again. No analysis, just spin. Even Trump’s discredited campaign manager, Corey Lewandowski, is now a CNN expert, though he is not yet on the “panel.”

This is a complete abandonment of journalistic responsibility, but none of this is about journalism. The so-called debate is a way to keep the pot boiling for what CNN assumes is a yawning audience. Alas, that pot scalds everyone, including former Obama advisor David Axelrod, who should have known better than to be in this company. At least we know Fox is propaganda — Republican advocacy thinly disguised as news. What the heck is CNN — noise thinly disguised as nonsense?

If there were anyone whose editorializing was worth watching during this convention, it was David Brooks on PBS, even as his fellow PBS commentators, Amy Walter and a rotating cast of NPR solons, dispensed the same old conventional wisdom. You had the feeling that the fear Trump keeps invoking had already enveloped them. They were afraid to call Trump out, afraid to underscore the farcical, horrifying anomaly he is.

Brooks is undeniably intelligent. He has interesting things to say. Though he has long been an ardent apologist for conservative ugliness and must bear the burden for it, he is also clearly a tormented soul who can barely tolerate politics anymore, much less Republicanism. In effect, he has always been too smart to support his party. Now he may be too smart for the whole system.

And as for his feelings about Trump? Brooks may have been the only talking head with the courage to deny the nominee’s normalization. In fact, the single most telling exchange I saw during the entire convention was Brooks’s riposte to Family Research Council President Tony Perkins, who was explaining why he was now supporting Trump, albeit reluctantly, despite Trump’s personal failings. Brooks calmly asked what great “virtues” Trump epitomized. “Is it humility? Grace? Charity? Faithfulness?” And when Perkins insisted that he would persist in opposing LGBT rights, again Brooks sallied, “Scripture doesn’t say anything about LGBT bathrooms or anything like that. It says a lot about character, and it says a lot about a certain threshold standard of personal decency.” Brooks said he would probably advise evangelicals to stay home on Election Day.

Brooks has become disengaged from the tumult. He is far more interested in values than in politics, and for good reason. The second must be built on the foundation of the first, and I think that while in the past he often has lost his way, egregiously so, he has something valuable to contribute to the national conversation. Amidst all the hogwash, he can be truly cleansing. At the GOP convention, when he roused himself, he rinsed away some of the filth.

One last thing. It is virtually verboten for TV journalists to criticize a nominee’s acceptance speech too forcefully, and Trump’s was no exception. We heard how dark it was, but not, at least on TV, how demagogic and authoritarian it was. (I think it was blogger Andrew Sullivan who pointed out the terrifying difference between chants of Obama’s “Yes, we can!” and Trump’s “Yes, you will!”)

Nor did I hear a single commentator mention the way Trump, in full furrowed frown and eyes narrowed to slits, would step back from the podium after a pronouncement during his speech and let the roars wash over him. I for one had never seen an American politician make that self-aggrandizing gesture, and I have seen a whole lot of political speeches.

Why is this important, and why should some pundit have noted it? Because Trump’s is precisely the posture you see in films of Hitler and Mussolini speechifying. Precisely: The Great One accepting the servile gratitude of the crowd while he strikes the pose of an unappeasable god. We haven’t had that gesture in a democracy.