Conservatives mad at Hilton for showing gay couple in ad

The anti-gay AFA flips out, again 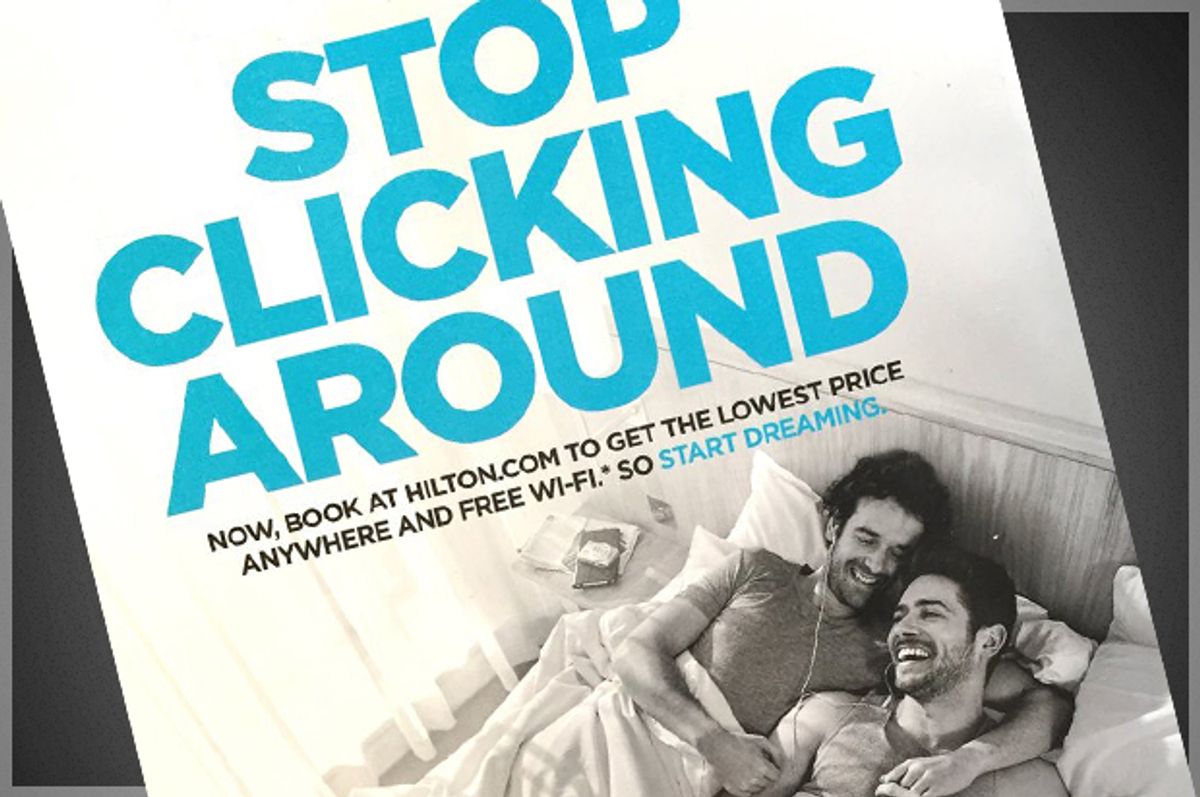 Damn, it just never gets old, watching the bigots on the wrong side of history flail around while the functioning adult world pays them no mind. Don't ever change, American Family Association, because you are so, so entertaining.

The latest source of the organization's outrage is Hilton Hotels -- for having the audacity to run an ad featuring a smiling gay couple in bed together, sharing a set of earphones. The ad, part of the brand's "Stop clicking around" campaign which debuted spring, ran in the June issue of Travel + Leisure. Hilton HHonors & Loyalty Marketing senior director Kasey O’Leary told Queerty in May that the duo are a real-life couple, and they're also going to be featured in a television spot this summer. O'Leary said at the time, "We’re proud to depict and reflect our guest diversity in our advertising."

Naturally, the AFA — which supports champion of moral behavior Donald Trump — sees things differently. In a new petition, the organization frets, "Travel and Leisure [sic] isn't a gay-specific magazine sent directly to homosexual's homes. It's a widely distributed mainstream publication that can be found in many public places such as doctors' or auto repair waiting rooms. If Hilton had advertised two men playing tennis, cards, or having lunch, that would have been reasonable. However, Hilton chose to make a cultural and social statement by purposely marketing the promotion of homosexuality to a large segment of the population who finds the idea of two men sleeping together unnatural and offensive."

It's almost funny. Where to begin? How about that gay people don't exclusively read gay-themed publications, any more than I subscribe to Hetero White Lady Monthly? Gay people go to the doctor and get their cars fixed too! And this idea that it'd have been okay if they'd been playing cards? Do these clowns think that gay people are somehow less gay when they're having lunch? Or that it'd be acceptable to depict a somehow gay game of tennis but not a gay snuggle? See, this is exactly the absurdity of homophobes — when they reveal their squeamishness and essentially say, "We don't mind if you're homosexual as long as you don't seem homosexual around us." PS they do mind. That's why they do ludicrous things like flip out when they see a normal couple doing the normal couple thing of sharing a bed. The transparent cluelessness, it's amazing.

Of course, it's nothing new. Just this past spring, the organization tried to make Target patrons safe from the imagined transgender menace of the company's welcoming policy of inviting "transgender team members and guests to use the restroom or fitting room facility that corresponds with their gender identity." At the time, the AFA circulated and petition and called for a boycott of the stores, even as it tried to soft pedal its phobia, explaining that while "We want to make it very clear that AFA does not believe the transgender community poses this danger to the wider public… this misguided and reckless policy provides a possible gateway for predators who are out there." The move got a lot of attention, but in May, Target CEO Brian Cornell told Fortune magazine that "To date we have not seen a material or measurable impact on our business" from the outcry.

And Target has held firm on common sense. Earlier this month, a transgender woman was arrested and charged with video voyeurism after an Idaho incident involving an 18 year-old female patron, yet the company itself seems to grasp the distinction between a single problem person and an entire class of individuals. After all, in May, a Florida customer went viral after chasing down a male voyeur in a Jacksonville-area store.

Hilton and Target and lots of other huge brands grasp that gay people buy stuff and go on vacations, and that is not news. It's also not anything that any rational consumer needs to be protected from. It bothers you to know that a gay couple share a bed? Oh grow up, AFA. Or just never sleep in another hotel. But don't expect the rest of the world to warp to your sad, delusional vision.