Clinton’s DNC was a big win for normal people and normal politics — but in a country gone insane, that might be a problem 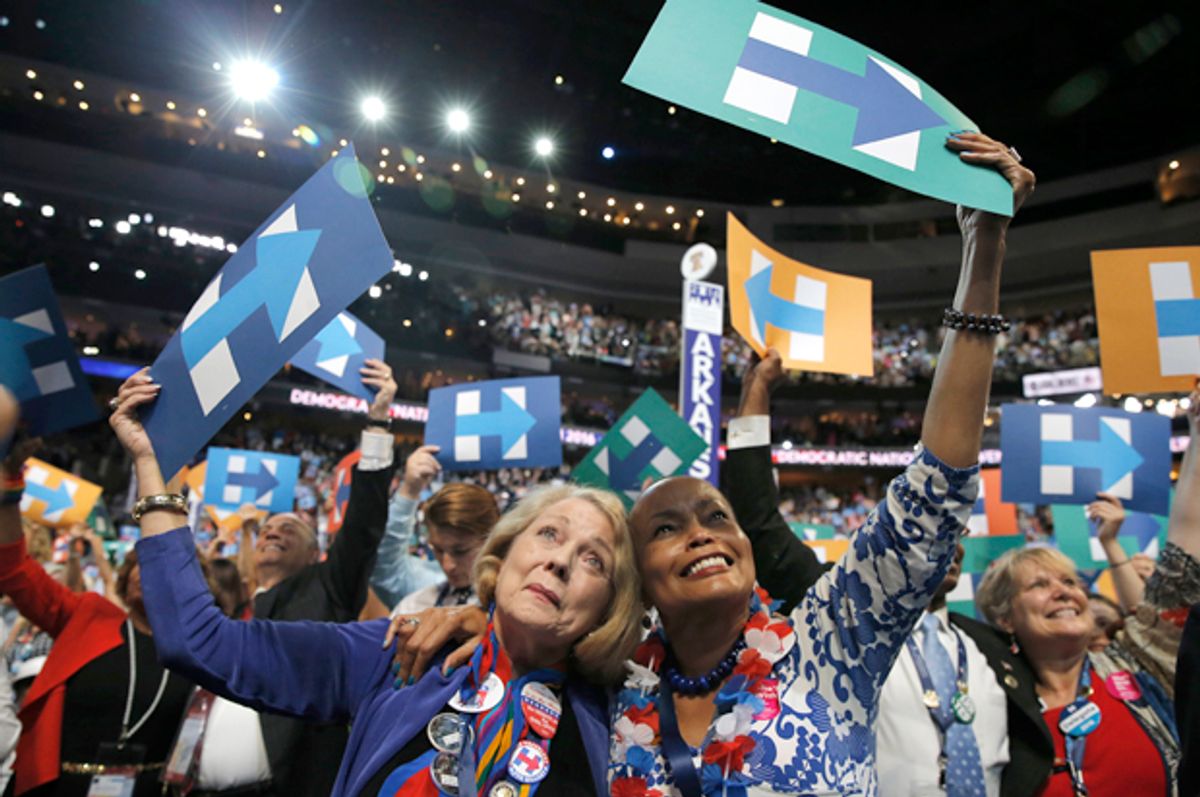 PHILADELPHIA — As I was walking across the asphalt desolation of the South Philadelphia Sports Complex — next to which downtown Cleveland is pretty much the Left Bank — after the last night of the Democratic National Convention, I had an epiphany about the contradictory nature of this event. This year’s DNC, culminating in the triumphant coronation of Hillary Clinton on Thursday night and her highly effective acceptance speech, hecklers and all, was a great victory for normal people. Whether or not that’s a good thing, in a country where the normal has become pathological and the pathological normal, is open for debate.

Normal people were all around me on the walk back to the subway station: Polite, practical-minded people with college degrees and good jobs; people who were well-dressed but not ostentatiously dressed. Most but not all were homeowners, most but not all were moms and dads. Most lived in large-ish cities or middle-sized cities or the kinds of inner suburban towns that have actual bookstores and actual coffee shops. Of course I’m guessing about those demographics, but I’m right. They were “diverse,” in the usual Democratic Party check-the-boxes way, in that quite a few were not white and quite a few were not straight and the ratio of female to male was about even. But there was a certain conformity in effect nonetheless — a conformity of spirit, or of vibe — and if you claim not to know what I’m talking about you’re kidding yourself. They were normal. They were pleasant. They were Democrats.

That was the idea, of course. Faced with an opposition party that has visibly gone insane and turned itself into a Gathering of the Juggalos, nominating not just the stupidest and least qualified candidate in political history but pretty nearly the worst person of all time, the Democrats have doubled down on normal. They have defeated or absorbed the defiantly non-normal left-wing opposition, at least for the moment, and driven the renegades out of the tent. Now they are ready to stand together, in nice pants, and save whatever can be saved of the American republic. They have built the last fortress of what Jeb Bush plaintively described last winter as “regular-order democracy,” a Minas Tirith of whole-grain wholesomeness, standing alone against the Dark Lord.

If Hillary Clinton herself has spent too long in the enclaves of power and privilege to qualify as fully normal, she remains normal-ish, a convincing simulacrum of the normal person she used to be. Clinton is not an orator in the Barack Obama class or a master showman like Donald Trump, but her speech on Thursday was well-crafted and well-modulated. She used the gendered perception that she is shrill or harsh or unlikable to her advantage, presenting herself as the unflappable adult administrator — the high school principal, writ large — prepared to make tough decisions while other people yell and lose their minds.

As the onslaught of Dad jokes on Twitter established, a person cannot be more egregiously normal than Tim Kaine, who seems deeply torn at every moment between a desire to take the Cub Scouts camping and a desire to take his wife to brunch. (At someplace, y’know, nice.) Kaine’s primary role on the ticket is to soften and humanize it and lend it a snuggly fleece lining on cool fall evenings, which at the very least is a new role for a male politician to play. I don’t think the full historical force of the moment hit me until I saw Clinton and Kaine on stage together, clasping hands as running mates, and realized that the shorter one in the white pantsuit was at the top of the ticket.

But I have questions about what normal means in 2016, and whether there is any such thing. There’s also the question of whether normal will work as an electoral strategy against the nuttiest political amalgamation of recent history, a Republican Party that has sold itself to a billionaire con man, emptied itself of its so-called core principles and imbibed massive doses of Alex Jones-style paranoia and conspiracy theory.

This is an obvious and unoriginal insight, but looking around me at the crowd of normals streaming toward the SEPTA station, I reflected that they (or, however reluctantly, we) do not know the Trump electorate, cannot understand what they believe or what they want, and have no effective way to communicate with them. While the assumption that “nice and normal” will outnumber and outvote “crazy and delusional” sounds reasonable to me — setting aside any interrogation of those terms for the moment — how the hell would I actually know? Ask Jeb Bush how his “regular-order democracy” is going. Ask David Cameron. Are “we” just playing the role of Charlie Brown, convincing ourselves that this time the collective Lucy of the disgruntled electorate won’t yank the ball away?

Even assuming that Clinton defeats Trump, it does not follow that everything is OK and democracy is saved. Because what we observed inside and around the Wells Fargo Center this week was not entirely normal. It was a political party at war with itself, which is probably healthy, and also a political party suffering episodes of psychosis, which is less so. There were amazing and inspiring moments on Thursday, that suggested the genuine diversity and remarkable potential of the Democratic coalition: Khizr Khan, the father of a fallen Muslim U.S. Army officer, offering Trump his copy of the Constitution; the Rev. William Barber II, preaching the gospel of “Jesus, a brown-skinned Palestinian Jew.”

There were also pathological outbreaks of jingoism and flag-waving, promises of endless war against faceless enemies, and a consistent rhetoric of American exceptionalism that would have seemed too extreme for almost any Republican convention of the pre-Reagan years. I understand the strategy, pretty much, and I understand the goal. But Jesus H. Christ. Did we have to go all the way to that screaming general out of “Dr. Strangelove”? If he wasn’t talking about protecting our vital fluids from Communism, it sure sounded like he was. Right around then I had my own little Jill Stein insurrection, inside my mind, before sending in the cops and busting some heads.

I was deeply troubled by the discordant tone of the Philly spectacle, by the haphazard leaps it made from a Bernie Sanders-lite progressive social vision to war fever to a Katy Perry concert. I feel absolutely no doubt that the same insanity virus that destroyed the Republican Party from within has infected the Democrats, and the normals are completely unaware of it. (Case in point: the paranoid desire to believe that Trump is in league with Vladimir Putin to destroy America, rather than just an idiotic, blustering troll.) I’m tempted to issue a heartfelt plea about how we can’t afford the usual left-liberal thing of saying, “Whew, we didn’t elect a monster” and then retreating into our info-consumer bubbles for four years. But who would I be kidding? That’s exactly what will happen. That’s the normal person’s way.

To be clear, I don’t question the urgency of defeating Trump, and from the beginning of this cycle Hillary Clinton has been the only realistic option. I’m not throwing shade on the Democrats for not nominating Sanders, partly because that was never remotely likely to happen and partly because there’s no telling how that would have turned out. A general election pitting Sanders against Trump would have been a completely unpredictable scenario with various horror-movie endings, and President Sanders plus a Republican Congress might have made the Obama years look like an acme of good government.

So here we are with the normal people, in a giant Philadelphia parking lot and the giant parking lot of America. This convention went pretty well, disgruntled Bernie delegates and protesters and all. Hillary gave a good speech and didn’t terrify the white men of America too badly, or any more than they were terrified already. She pointed out that Trump is a bully and a dumbass to people who already knew that, and is headed toward a pretty good post-convention bounce in the polls. So why do I not feel comforted, or normal? Why do I feel like one of the replicants in “Blade Runner,” just before finding out that he’s a replicant?

Right after Hillary’s speech ended but just before the balloons dropped, DNC floor managers hustled through the crowd with giant yellow placards reading “GET READY FOR STUNT #1.” It was a reference to their stupid red, white and blue card display, which didn’t go all that well (in an otherwise skillful production). I read those words with an almost comical sense of despair. OK, I’m ready for Stunt #1. What choice do I have?