No, white people, you don't get to say the N-word—a lesson Karlie Hay should have learned earlier in life 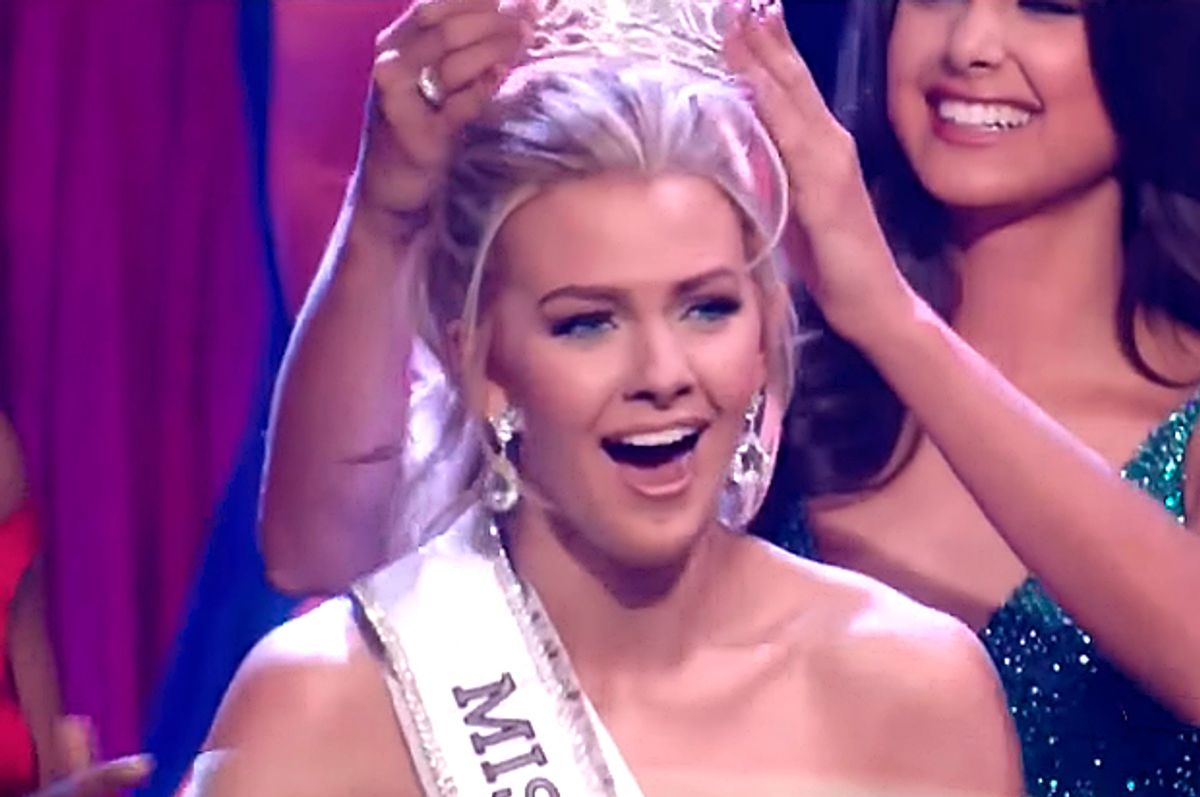 I know many of you are going to be upset by what I'm going to say. I know all of your arguments about how very unfair it is. But white people, save yourself some time and angst and public embarrassment -- and just don't say the N-word. No, really, don't. This goes about double if you're a blonde, blue-eyed, teenage girl. Oh, does that disrupt your sense of entitlement? I'm so sorry. How hard the world must be for you.

So, speaking of white girls, have you met Karlie Hay? Over the weekend, the Texas 18-year-old beat out her near-identical blonde, blue-eyed competition to win the crown as Miss Teen USA.

What Miss Teen USA, you ask? Is parading around adolescent girls in "athletic wear" still an actual thing, you wonder? Yes, it is.

And shortly after snagging the crown on Saturday night, Hay, whose old Twitter handle — with its imperative to "Be Somebody who makes everybody feel like a somebody" is currently locked —  was being called out on social media for her seriously clueless public history of racial slurs.

As director Xavier Burgin pointed out, our new Wonder Bread-level white Miss Teen has an unfortunate Twitter history of very casually referring to her buddies as "n____r" and "my n____r."

On her brand new @RealMissTXteen Twitter account, Hay said on Sunday that "Several years ago, I had many personal struggles and found myself in a place that is not representative of who I am as a person...I admit that I have used language publicly in the past which I am not proud of and that there is no excuse for. Through hard work, education and thanks in large part to the sisterhood that I have come to know through pageants, I am proud to say that...I am today a better person. I am honored to hold this title and I will use this platform to promote the values of...The Miss Universe Organization, and my own, that recognize the confidence, beauty and perseverance of all women."

So how do we parse that statement, coming from an 18-year-old blonde girl who just competed for and won a tiara?

I am a great believer in forgiveness. If I were being judged today on every magnificently stupid thing I did and said at 18, I'm not sure I'd have any friends or work to speak of. I'd like to hope that time and experience have expanded my ability to not be the idiot I was then.

On the other hand, even without benefit of social media, I know I never played fast and loose with racial slurs, and if my own adolescent daughters ever did now, I would bring down the hammer so hard their grandchildren would feel it.

But my daughters and I have had the benefit of growing up in racially diverse communities, where lessons in privilege are imparted early. Hay, the Tomball High Texas cheerleader, does not appear to have come from anywhere near such a world. It's possible that until she stepped into the spotlight in such a global way Saturday night, nobody had ever flat-out told her to cut the crap.

The Miss USA pageant has affirmed this week that in spite of her derogatory older tweets, Hay will retain her crown, saying that the organization hopes to support her with "her continued growth." That's a nice idea, and believe me, it beats the alternative of staying ignorant forever.

But it also reveals the incredible advantages that someone like Hay has. She does get to "grow." She does get to move on. She isn't tainted forever by her youthful dumb mistakes — and that's a benefit of being young and pretty and white and having a tiara.

The pageant says, "She was in a different place in her life and made a serious mistake she regrets and for which she sincerely apologizes," but, hold up a sec — she hasn't. She says she's not proud of what she did. She says she's had struggles. She boasts that she's a better person now.

But she hasn't actually come out and said, hey, I'm sorry. That would achieve a lot. And that she hasn't done it proves she still has many lessons yet to learn.

Because while you would not even believe how many furious white people will happily argue all day long about how "If it's okay for other people to say it, why can't I?" the basic truth is that if you want to look at racial fairness in this country, we can really concede on this one. And if you want to be forgiven for your mistakes, start with actually apologizing for them.