The geography of inequality: Segregation is normalized but must be put to an end

Silence on an economic crisis: "American Apartheid" and the worsening conditions of poor U.S. cities 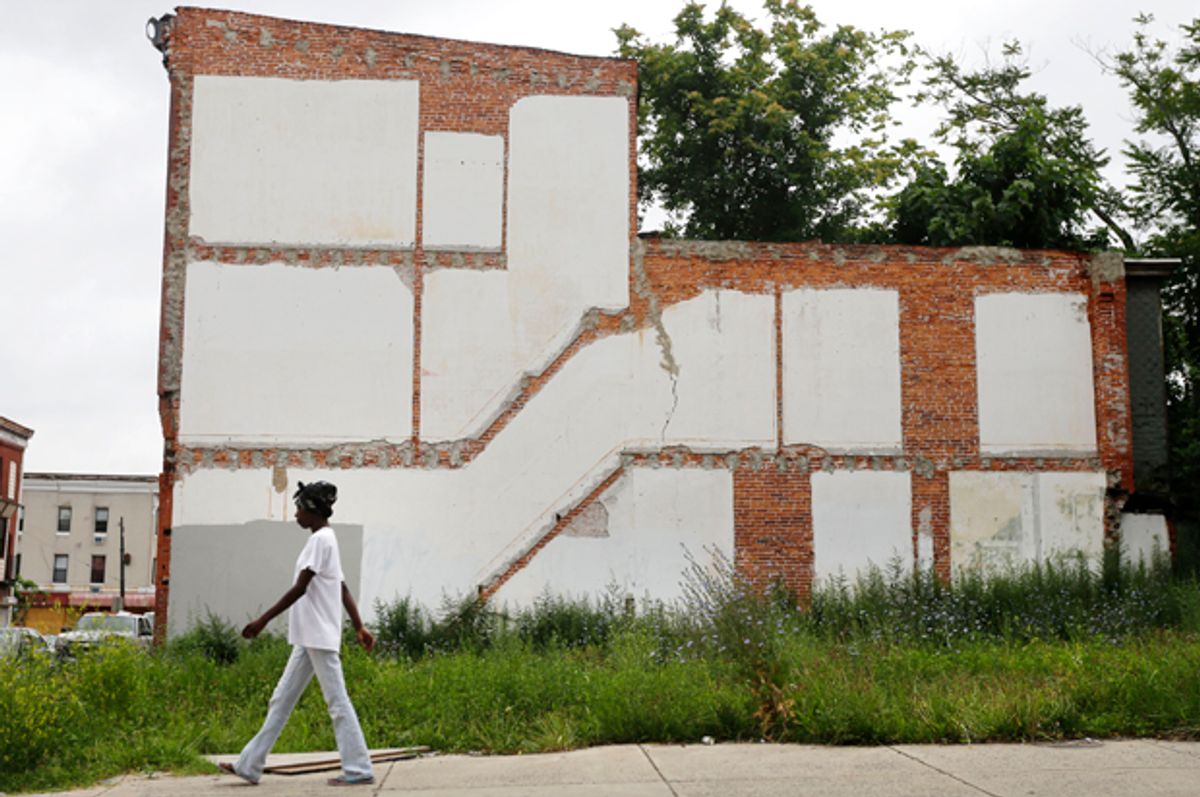 A woman walks through a blighted neighborhood in Philadelphia. (AP/Matt Rourke)
--

On television, Philadelphia played a largely meaningless backdrop to the Democratic National Convention.

“My friends, we've come to Philadelphia — the birthplace of our nation—because what happened in this city 240 years ago still has something to teach us today,” said Hillary Clinton, accepting her nomination.

In reality, what’s happening in Philadelphia today offers much better grist for political insight. The city, as delegates discovered, boasts amazing restaurants, diverse, bustling parks and markets, charming rowhouse streets, and an urban downtown with the highest residential population of any save for Midtown Manhattan. But as a bumper crop of timely this is the real Philadelphia stories explained, it is also a city pockmarked with boarded-up houses and vacant lots, populated by families broken apart by gun violence and incarceration, and where public school buildings are silent not because it is summertime but rather thanks to the long-term fiscal destruction of the majority-black district.

The tale of two cities is a frequent and useful trope but fails to emphasize the fact that racial and economic segregation persist as organizing principles of American society. Segregation is the geographic expression of inequality, and locks it in place. Mass incarceration is, in turn, quite literally an extension of residential segregation: holding pens to discipline and control people, disproportionately black, expelled from the formal economy and evicted from their homes. The federal government has the power to do something about it but the candidates vying to run it don’t discuss it.

Cities are everywhere and nowhere this election, receiving little explicit attention while the issues under debate, from criminal justice to immigration, are profoundly urban. Cities are home to the nation’s largest and most controversial police forces, and the sentences meted out in urban courtrooms are the great entryways into America’s massive prison system. In protest, Black Lives Matter, like Occupy Wall Street before it, strategically leverages density and urban infrastructure toward insurgent political ends. Segregation defines the contours and functions of American crime, policing and punishment—and of American politics and economics as a whole.

Donald Trump is a New Yorker, and knows from (shady) firsthand experience that cities are the engines driving the nation's economic growth. But culturally, cities play a different and sinister role, which Trump exploited to portray them as home to the scary un-American other—a source of physical, political and demographic danger. At the RNC, Trump warned against “terrorism in our cities,” complained that murders are up in cities, and decried so-called Sanctuary Cities. While Ted Cruz denounced “New York values,” Trump does something of a piece, coalescing the fears of a coming minority-majority America.

Neither Democrats, paying renewed attention to economic justice, nor Republicans, who one doesn’t expect to care much anyways, have an explicit program to confront urban problems. Segregation, underfunded schools and inadequate and expensive housing afflict cities whether they be decaying Cleveland or booming San Francisco. Last month, the major party conventions touted economic agendas, halfhearted criminal justice reform measures, foreign policies and a surfeit of personalities. There was little to address the problems of cities as such, and to deal with a seven-decade long urban crisis.

According to experts on a University of Pennsylvania Urban Studies panel I moderated before the DNC, the condition of poor urban neighborhoods is declining but receive as little attention as ever.

Rental prices are too high and wages are too low. The amount one must earn to afford a two-bedroom home rose from $16.31 in 2006 to $20.30 today, said Ira Goldstein, the president of policy solutions at Reinvestment Fund. Federal rental assistance is down $1.6 billion since 2010. Middle-class neighborhoods, especially those where people of color live in large numbers, have been hit by repeated crises, from predatory lending in the 1990s, subprime mortgages in the early and mid-2000s, to the foreclosure epidemic unleashed in 2008. Community Development Block Grants are down 72-percent from 1975 and 12-percent since 2009, meaning cities have less federal money than ever to respond to recurring crisis.

Politicians ignore poor people in American cities and many poor people return the favor by not voting—and in Baltimore, by rioting. Politicians like Clinton suggest that training police on implicit bias is a solution to what black people are protesting against in the streets. It is useful to recall an essay Bayard Rustin wrote in 1966, putting the anger in geographic, and political economic, context.

Rustin warned that “if every policeman in every black ghetto behaved like an angel and were trained in the most progressive of police academies, the conflict would still exist. This is so because the ghetto is a place where Negroes do not want to be and are fighting to get out of. When someone with a billy club and a gun tells you to behave yourself amid these terrible circumstances, he becomes a zoo keeper…He is brutalizing you by insisting that you tolerate what you cannot, and ought not, tolerate.”

The growing attention to economic inequality has not created the political will to confront segregation, which is what shapes and perpetuates it on the local level. Measures to attack suburbs’ use of exclusionary zoning to keep poor people of color out have gained traction under Obama but the Office of Urban Affairs he created has quietly all but disappeared. The national debate over education remains dominated not by strategies for creating equity but by debates over charters and standardized testing.

Increased and targeted funding for housing and education, aggressive legal fights against segregation, and unionized, high-wage public jobs would help. Another place to start, for Democrats who have made a call to overturn Citizens United a refrain, would be to add two 1970s Supreme Court decisions to the list.

The Court, as Michael J. Graetz and Linda Greenhouse discuss in their new book on the Burger Court, erected two major roadblocks to creating integrated and equally-good public schools, gutting Brown v. Board of Education before it could be truly implemented. In San Antonio Independent School District v. Rodriguez, the court ruled in 1973 that it was constitutional to fund schools through local property taxes even if poor districts got shortchanged. The following year, in Milliken v. Bradley, they ruled against extending school busing to the suburbs—rendering desegregation impossible in major metropolitan areas.

Four decades later, the results are dire: urban public schools, and a growing number of suburban ones, are segregated islands of racially concentrated poverty cut off from the wealth funding exclusive municipalities. Big picture policies to address inequality will disproportionately, and rightfully, deliver economic justice to poor people in cities. But inequality is not only about wages but also about space and segregation—and the prison archipelago constructed to contain the people who it cannot contain. To end inequality, what sociologist Douglas Massey aptly dubbed "American Apartheid" has got to go. It’s not in any party platform but remains the basis of this country’s worst and most persistent problems.