What does one do with a leader who's better than others in the past, but still not nearly good enough? 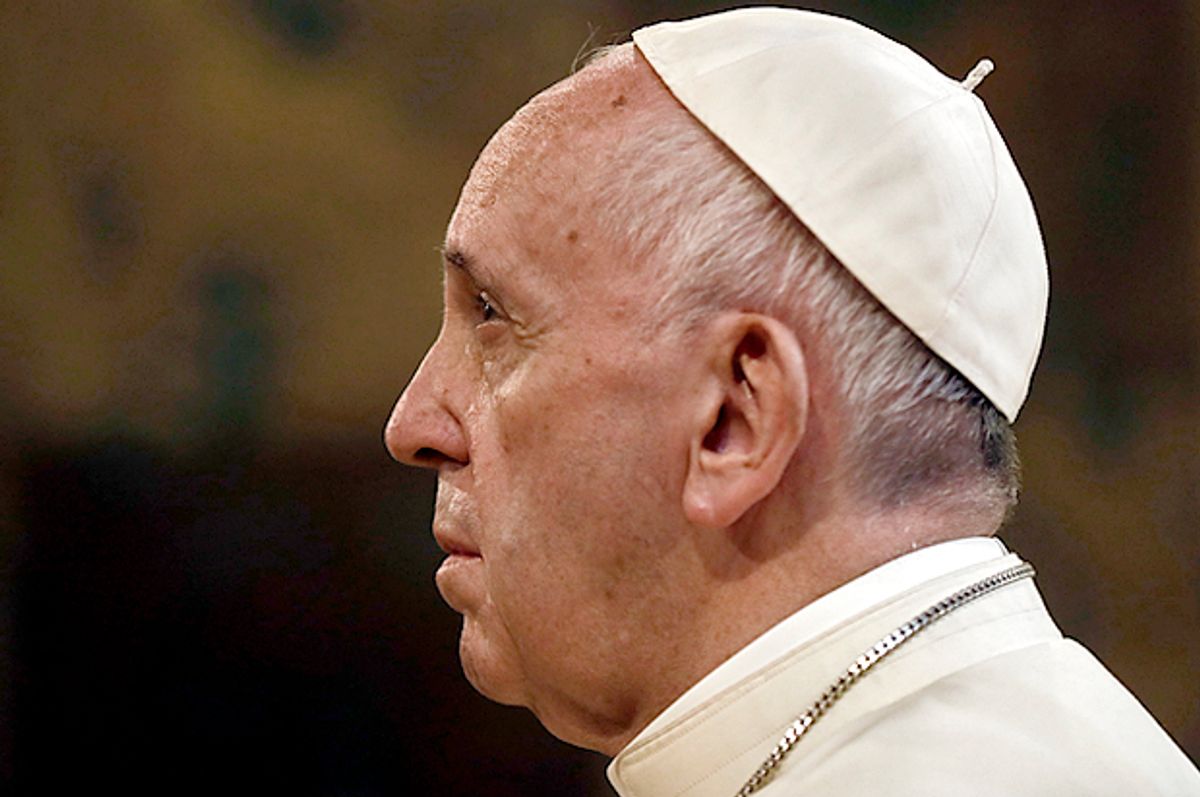 It never stops being exasperating, being a progressive Catholic. It feels like every time there's an even incremental step forward in the Church's stance on social justice issues, the institution seems somehow obliged to take another one backward. Take, for example, the remarks of Pope Francis last week in Poland, released by the Vatican on Tuesday, on the subject of transgender individuals.

In his remarks, the pontiff said, "In Europe, America, Latin America, Africa, and in some countries of Asia, there are genuine forms of ideological colonization taking place. And one of these — I will call it clearly by its name — is [the ideology of] 'gender.' Today children – children! – are taught in school that everyone can choose his or her sex. Why are they teaching this? Because the books are provided by the persons and institutions that give you money. These forms of ideological colonization are also supported by influential countries. And this terrible!"

Just a quick reminder here: That's not how gender works. No one is asking kids to "choose" a gender anywhere. That's not a thing. In fact, progress means accepting that gender identity is not actually a checkbox item. Francis added that he been in conversation with his predecessor Pope Benedict, who agrees that "God created man and woman; God created the world in a certain way… and we are doing the exact opposite." From the people who were wrong about the rotation of the earth!

Understandably, the pope's remarks were, as The New York Times put mildly, "a disappointment." Marianne Duddy-Burke of the LGBT Catholic organization Dignity condemned the pope's "dangerous ignorance" and said, "It’s very troubling that the pope would say this. It also shows that the pope doesn’t understand the danger that his words can mean for gender-nonconforming people, particularly those who live in countries with laws or cultural pressures that put these people at risk for violence." And of course, hateful commentators like Allen West were quick to applaud, saying, "Liberals seem to forget that the Pope is Catholic." No, we remember. We just have some feedback here.

Ever since becoming pope three years ago, Francis has had a confusing relationship with the LGBT community. In 2015, he tossed gender identity in with nuclear annihilation, saying, "Let's think of the nuclear arms, of the possibility to annihilate in a few instants a very high number of human beings. Let's think also of genetic manipulation, of the manipulation of life, or of the gender theory, that does not recognize the order of creation. With this attitude, man commits a new sin, that against God the Creator. The true custody of creation does not have anything to do with the ideologies that consider man like an accident, like a problem to eliminate."

Earlier this year, in his first major paper on family, the "Amoris Laetitia” — "The Joy of Love" — he firmly asserted that "There are absolutely no grounds for considering homosexual unions to be in any way similar or even remotely analogous to God’s plan for marriage and family."

Yet this is also a leader who helped change the Church's tone when, early in his papacy, he said, "If a person is gay and seeks out the Lord and is willing, who am I to judge that person?" This is a man who, after the massacre in Orlando earlier this summer, endorsed the remarks of a cardinal who said that the church had marginalized gay people and should apologize. So what does one do with a leader who's better than others in the past, but still not nearly good enough?

On Thursday, I spoke to trans writer Parker Molloy, who shared her own perspective as someone who grew up in a Catholic home. She says, "I came out as trans in 2012. That same year, Pope Benedict devoted a section of his Christmas address to shitting on trans people, saying (among other things), 'When the freedom to be creative becomes the freedom to create oneself, then necessarily the Maker himself is denied and ultimately man too is stripped of his dignity as a creature of God, as the image of God at the core of his being. The defense of the family is about man himself. And it becomes clear that when God is denied, human dignity also disappears.' So yeah, trans people are a threat to humanity, I guess."

She added that now, "How the pope approaches these issues does matter, because after all, there are millions and millions of people who do take what he says as the word of God. I'd like to see a shift away from the old, discriminatory thoughts wrapped up in a nice, more PR-friendly bow. If there's a God, I don't believe he would be so cruel as to hold to the strict, discriminatory teachings that have existed for so long. I think he'd be more interested in people helping others be better people and living their lives to the fullest. Washing the feet of the poor? Great! Building bridges and not walls? Perfect! How does saying that trans people (who hide themselves because of the church and society's past teachings, have a high suicide attempt rate, are more likely to live in poverty, etc.) are a threat to humanity help anyone?"

I think about these things a lot, as a woman who believes strongly that reproductive rights and LGBT rights are human rights, and that an institution that does not recognize that is failing its community. It's not like anybody can the vote the leadership of the Church out. It's not a democracy. It's a global organization that has repeatedly abused its power and then shamefully protected the worst members of its ranks. But it's also one that has been a target of hatred and violence.

The world is not an easy, black and white place. If you subscribe to any declared political party, maybe you grapple with the same conflicts and compromises. There's your belief system, and there's the enormous, flawed entity that represents it. There are the good people in it trying to stand up for the things that matter, and there are the corrupt and the ignorant. You think that I — a lifelong Democrat from the great state of Elliot Spitzer and Anthony Weiner — am not familiar with disappointment in leadership? You think my fellow Catholics like Stephen Colbert and Tim Kaine have it all figured out about how to best carry out the message to truly love your neighbor? And yet I stay, because to do otherwise when there is so much goddamn work to be done would be, for me, the spiritual equivalent of moving to Canada. I'd rather stick around and make trouble. That's what Jesus did, right?

I would never in a billion years try to convince anyone else to share my religious beliefs. I do, however, hope that those who do will continue to join me in speaking out against ignorance and intolerance, to be the kind of Catholics who are earnestly trying to do good in the world. Because my trans friends, my children's friends, have not been "ideologically colonized." They're just human beings trying to live honest, hopeful lives. So I want a Church that represents me, that represents the people I love who are not old celibate men. And until the pope understands how gender works, he's hurting the very flock he's supposed to lead.