The troubling and counterproductive trend of liberals policing free speech: We cannot silence those we disagree with 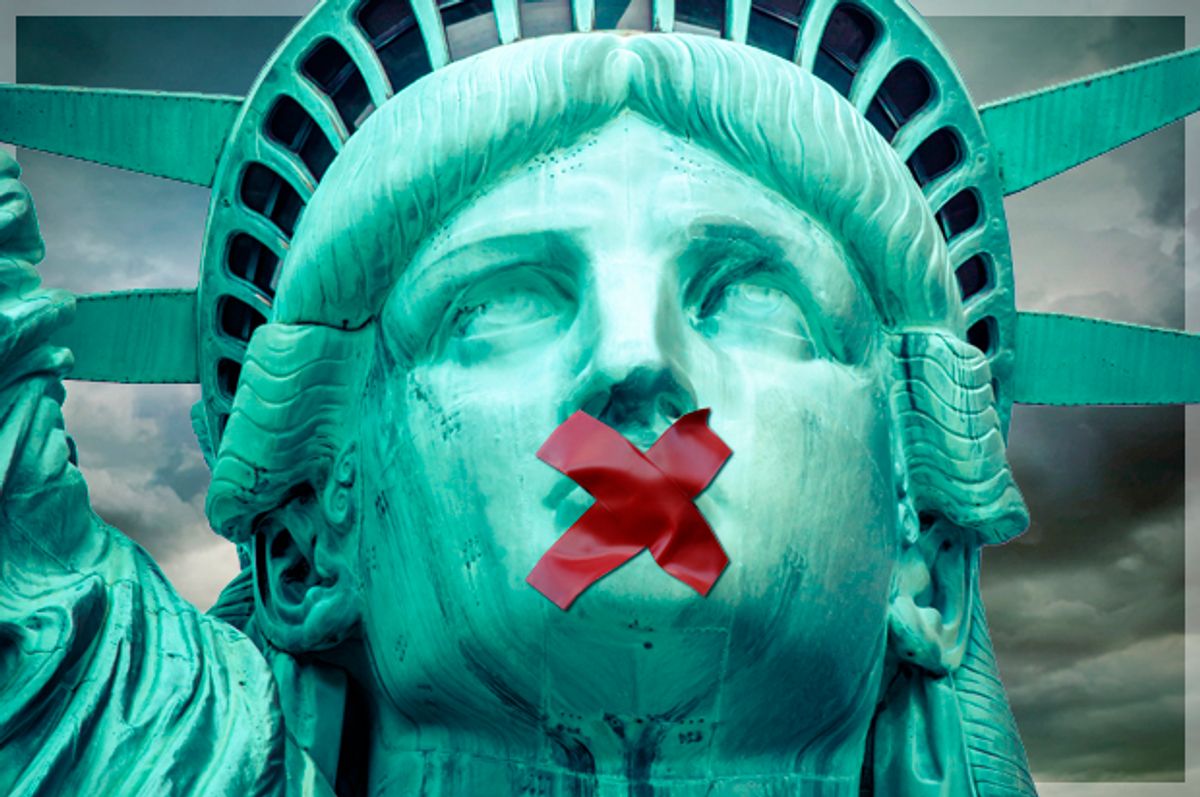 When Donald Trump was asked last November to give his opinion on the student-led protests at the University of Missouri, he called them “disgusting,” adding to Fox Business News that “I think the two people that resigned are weak, ineffective people. […] Trump should have been the chancellor of that University. Believe me. There would have been no resignation.”

While Trump’s language was hyperbolic and insulting, he wasn’t simply making these comments out of spite. Throughout his presidential campaign and into the year 2016, free speech issues have been a touchstone among right-wing politicians… and not entirely without cause. Trump may be hypocritical in criticizing others for suppressing free speech, but there is a deeper problem in our political culture that has bred demagoguery like his own.

For the past few years, there have been a number of incidents in which the ethos of free speech has been outright attacked. Recently an elected student official at the University of Houston who posted #AllLivesMatter on her Twitter feed was suspended from her position, forced to attend a “diversity” workshop, and required to participate in three cultural events each month. That same week, conservative pundit Ben Shapiro was banned from speaking at DePaul University because administrators anticipated protests from the liberal students. These are only the most recent incidents in a series that stretches back to similar suppressions at Yale, Wesleyan, and other schools last year… and explains why sixty-nine percent of students would favor prohibiting “intentionally offensive” speech on campuses.

Another example of the ways perceived personal slights have been used and abused is a “microaggression” tip sheet that has been adopted by many universities which labels innocuous expressions such as “America is a melting pot” as “racial microaggressions.” In higher education, programs dedicated to rooting out microaggressions, such as one under consideration last year at New York’s Ithaca College, are teaching young people that microaggressions constitute grounds for punishment. The program may have even contributed to the abrupt retirement of Ithaca president Tom Rochon amid anger over improper handling of alleged racist incidents on campus. Among the charges of racism, students complained of a fraternity party’s ‘90s-inspired dress code which suggested attendees appear as their choice of either “Preps” or “Crooks.” Earlier this year, one of the authors of an influential book on microaggressions was horrified to learn that his research was being misrepresented to shame students into compliance. A co-author of the above-mentioned microaggression tip sheet was similarly displeased that it was being used to mete out punishment, rather than as a way of starting conversation.

Just to be clear, this problem is not entirely confined to the left. For all of his focus on speech suppression on college campuses, Trump himself has openly declared that he would use his executive powers to sue journalists who write critical things about him. This is a man who in three months could be elected to the presidency of the United States because many in his own party did not find his declarations to be particularly troubling. Indifference to censorship is no better than actively perpetrating it.

Different facets of this issue have been personally apparent to both of the authors of this piece. Mark Schierbecker, then a student journalist at the University of Missouri, became a national news interest when in November of last year he filmed a viral video showing racial protesters at Mizzou forcing journalists to leave a protest site. When Schierbecker stood his ground, a communication professor assaulted him and then called for “muscle” to forcefully remove him.

That same week when Schierbecker spoke at a skeptic conference in Springfield, MO, several attendees questioned his motives for covering the story, and implied that he had racist intentions. Subsequently the conference’s organizer formally apologized to those in attendance for hosting a speaker whose story “only reflected the views of white people.”

By contrast, Matthew Rozsa (the other author of this article) had an incident from the other extreme – one that a radio host suggested tested the limits of free speech. After he wrote an article criticizing Trump for comments he considered anti-Semitic, prominent neo-Nazi websites wrote several pieces defaming Rozsa in overtly bigoted language. Alongside emails attacking him with racist slurs, Rozsa also received a few from leftists who argued that this proved he should reconsider his earlier views on free speech (which he had written in pieces like these).

The problem with this logic is that it mistakes the right to call out hate speech with the right to suppress it. Certainly it is the moral responsibility of anyone who witnesses racist, sexist, anti-Semitic, homophobic, or other bigoted language to openly call it out as such. Unless they do so, prejudiced ideas and attitudes will not be effectively identified and confronted. A line must be drawn, however, at practices that go beyond simple denunciation and instead try to silence those with contrary opinions (however unsavory they might be). When accusations of bigotry are used to shut down opinions that may not in fact be bigoted, or when the argument is made that a bigoted view should be censored altogether, everyone’s liberty is jeopardized.

This is the main lesson we must learn from the events of 2016. There is a fundamental truth about political debate that seems to have been lost – namely, that there is a difference between the specific ideas you’re supporting in a conversation and the ethics you practice in how you conduct that discussion. Regardless of whether you’re left-wing, right-wing, or anything else under the sun, it is imperative to respect the right of others to express views that are different from your own… even if those opinions, or the language with which they are conveyed, is offensive to you. Not only does this guarantee that your own right to expression will be protected if others find your ideas offensive, but it creates a climate that stimulates creative thought instead of stifling it. This should be true wherever a political debate is being held– on the Internet, at a university campus, or anywhere else.