America's embarrassing silence: Why has the U.S. remained quiet on massacre of drug users in the Philippines?

If the purpose of international drug control is protecting “the health and welfare of mankind, killing must stop 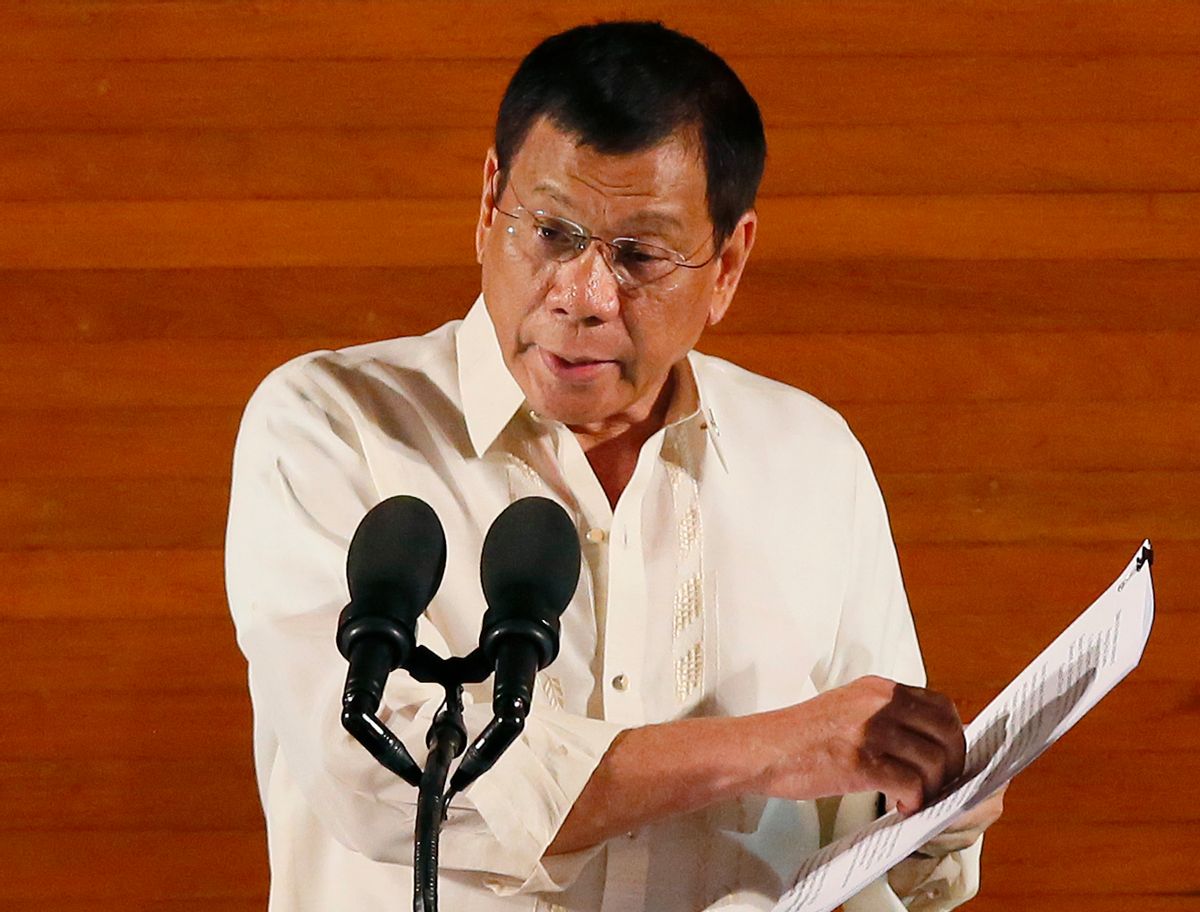 FILE - In this Monday, July 25, 2016 file photo, Philippine President Rodrigo Duterte delivers his first State of the Nation Address before the joint session of the 17th Congress in suburban Quezon city, northeast of Manila, Philippines. Duterte on Thursday, July 28, threatened to withdraw a ceasefire order he gave three days ago after suspected communist rebels killed a government militiaman and wounded four others in an attack. (AP Photo/Bullit Marquez, File) (AP)
--

In the past few weeks, a spate of horrific killings have taken place across the Philippines. Murders of people who use drugs, people who sell drugs and people who have simply been assumed to do either. No trials, no due process, these are state-sanctioned extrajudicial killings encouraged by the new president of the Philippines, Rodrigo Duterte.

Upon assuming presidency, Duterte made a public call for police and citizens alike to execute people who use or sell drugs, promising medals for citizens who comply and pardons for police if they are charged with human rights violations while carrying out the executions. Since making this harrowing call to action, over 700 people suspected to have been involved with drugs have been murdered.

A further 114,000 people who use drugs have turned themselves in to authorities — undoubtedly out of fear for their lives — and who will now face time in overcrowded prisons and likely be subjected to inhumane and involuntary drug treatment programs.

This sudden outbreak of extrajudicial killings represents grave human rights violations, yet it has been met with silence from the United States. Last week, U.S. Secretary of State John Kerry met with President Duterte and vowed to commit $32 million to support law enforcement training and efforts in the Philippines, making no mention of the unlawful killings currently taking place at the President’s behest.

Wednesday, more than 300 organizations from around the world released a joint letter calling on the United Nations drug control agencies to break their silence on the killings in the Philippines and to urge Duterte’s administration to put an immediate halt to its lethal anti-drug campaign. The letters were sent to the heads of the United Nations Office on Drugs and Crime (UNODC) and the International Narcotics Control Board (INCB) — the two bodies in charge of international drug control — which had so far refrained from condemning the Duterte administration for the atrocities committed in the name of drug control.

Finally, months after the initiation of the killings, and undeniably in response to pressure from the open letter, the UNODC released a statement Thursday on the situation in the Philippines, “condemning the apparent endorsement of extrajudicial killing, which is illegal and a breach of fundamental rights and freedoms,” and the INCB followed up with a similar release stating that the murders “constitute a serious breach of the legal obligations to which the Philippines is held by the three UN drug control conventions and by the corpus of international legal instruments to which the country has adhered.”

It is imperative for the United States to now follow suit, condemn these unlawful killings and ensure that any assistance to law enforcement in the Philippines is in line with the Leahy Vetting Process, which requires that the State Department withholds assistance to foreign security forces if recipients are found to have committed gross human rights abuses. It is unconscionable for the United States to provide assistance to the Duterte administration while the state-sanctioned killings of people involved with drugs continue.

Across the world, atrocious, inhumane and severe responses have been undertaken in the name of drug control, from mass incarceration of people who sell or use drugs; to destruction of livelihoods and the environment from aerial fumigation of illicit crops; to militarization and accompanying human rights abuses in the name of the war on drugs; to cruel, degrading and involuntary treatment. Last week, Indonesia resumed executions of people convicted of drug offenses, killing four individuals by firing squad.

In the drug war, lives are taken in the name of saving lives. If the purpose of international drug control is protecting “the health and welfare of mankind,” this must stop.

Hannah Hetzer, who is based out of Montevideo, Uruguay, is the policy manager of the Americas for the Drug Policy Alliance.