Win like a woman: How the media is still failing female Olympians

Women are taking home medals, but many reports still focus on them as wives and moms 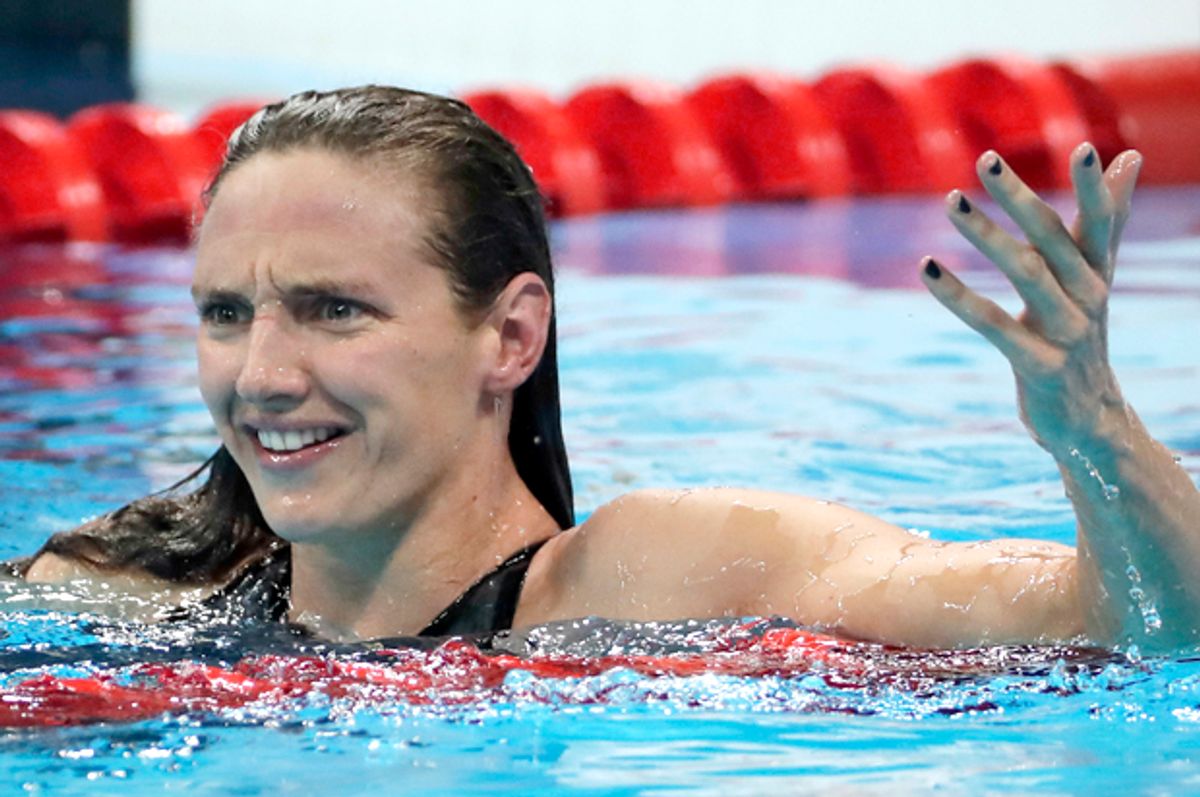 Did you hear that women’s trap shooter Corey Cogdell-Unrein won her second career Olympic medal for the U.S. team in Rio this weekend? Did you cheer for Hungarian swimmer Katinka Hosszú, who won the gold and broke a world record in 400-meter individual medley? Or were you too distracted by the media commentary about their husbands?

In the field of world-class competition, you can be literally one of the greatest athletes of all time and still have fans who'd argue your achievements are second-rate. If you want to get on the cover of Sports Illustrated, your odds are better if you're a swimsuit model than an actual record-crushing hero. And then there's the way that female athletes are repeatedly commented on in the media — either as objects of desire or grudging "plays like a guy" admiration, and always, the need to comment on their status as wives and moms.

When Corey Cogdell-Unrein took the trap shooting bronze over the weekend, eight years after earning her first medal in Beijing and four years after competing in London, the headlines noted her achievement by placing her in context. The Chicago Sun-Times announced, "Corey Cogdell-Unrein, wife of Bears DE Mitch, wins bronze." This is the entire second paragraph of the report: "Her husband, Bears defensive end Mitch Unrein, cheered her from his home near Chicago. They have been married for two years." Last month, the paper similarly declared that "Bears lineman Mitch Unrein's wife takes aim at gold in Rio."  The Sporting News, meanwhile, reported that "Corey Cogdell, wife of Bears lineman, wins bronze in shooting."

Writing for Australia's SBS, comedian Rebecca Shaw suggested that come the fall, maybe the headlines could announce that "Three time Olympian Corey Cogdell's husband plays a game of football." And on Twitter, performance artist Mallory Hanora noted the Chicago Tribune's tweet on the medal didn't even mention Cogdell-Unrein's name — but did include her husband's — with a wry, "Wow she trained so her whole life for that marriage congratulations unnamed woman."

Sure, he's a Chicago athlete and she's not — note how her home state didn't have trouble writing the news as "Alaska trapshooter Cogdell-Unrein claims 2nd Olympic bronze medal." And yes, the Bears have a bigger fan community than Olympic trap shooting does. But did anybody stop for a second before writing that headline to ask if the story here really is about this woman's identity as a wife? (It is not.)

It's kind of like how when Hillary Clinton achieved her history-making Democratic nomination for the president of the U.S., newspapers across the country blasted out photographs of her husband. Know when not to perpetuate BS, journalists.

For further evidence of this confusion, observe how, after Hungarian swimmer Katinka Hosszú took the gold, NBC's Dan Hicks pointed out her husband and coach Shane Tusup as "the guy responsible" for her performance, adding later that "It is impossible to tell Katinka's story accurately without giving appropriate credit to Shane, and that's what I was trying to do." I wonder if there's any way possible to comment on a woman's achievement without immediately saying that a man is responsible for it? I wonder!

I likewise wonder if it would possible — I'm looking at you, Washington Post — to talk about American swimming phenomenon Katie Ledecky without including former 2012 Olympian Connor Jaeger's faint praise that "Her stroke is like a man’s stroke. I mean that in a positive way. She swims like a man." Here's a radical thought — she swims like Katie Ledecky, and she is destroying it out there.

I also wouldn't mind, as I watch the games with my two daughters, to not be barraged with what former Olympic gymnastic medalist Shawn Johnson recently described as the media's "devastating scrutiny" on female athletes' appearance -- "what they wear, how fat or thin they are, even whether or not they’re pretty." As she says, "If you’re going to tear me apart, tear apart my gymnastics. Tear apart the one thing that athletes can either defend or work on, that actually is part of our sport. But if we’re out on the field, don’t start commenting on the kind of makeup we’re using."

And I could do without upbeat stories on what great moms some Olympians are, like the ones that say, "Balancing family with demanding careers is a constant struggle for many women, but you need look no further than the U.S. Olympic team for proof that you can excel at both." Because I don't see a whole lot out there about how new dad Michael Phelps manages to have it all.

It's crazy but, what if the default mode for reporting about female Olympics athletes wasn't about their roles as wives and moms? What if the commentary around them didn't scrutinize their bodies in such weird ways? Because the games are still just getting under way, and plenty of us just want to cheer for the women — and their incredible accomplishments — themselves.