Bathe in the self-indulgent broth of “Sausage Party,” most bro-tastic movie ever 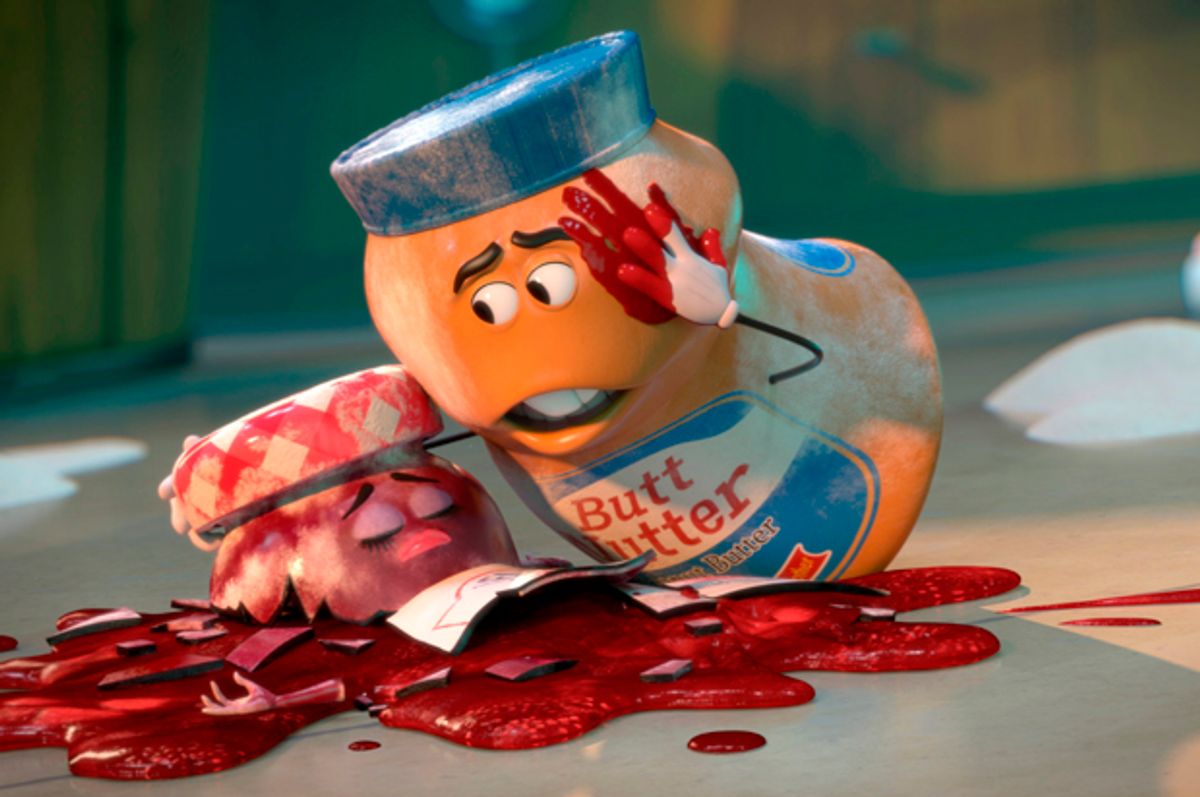 There’s definitely something to be said for “Sausage Party,” a relentlessly lewd and crude animated skit blown up to feature-film dimensions that is both profoundly idiotic and surprisingly ambitious. That thing may be this: Why, dear God, why? An impressive array of comedy talent and a surprising amount of thought went into this CGI parable about a supermarket hot dog named Frank (voiced by producer and co-writer Seth Rogen), who learns the awful truth about what is likely to happen to him in the Great Beyond, after the enormous godlike beings with shopping carts take him out of the store. Whether it was worth it in some way — whether a juvenile, sex-obsessed cartoon that dips into existentialist philosophy and ultimately reveals itself to be a version of Plato’s cave allegory actually makes human life more bearable — well, that’s a complicated question.

OK no, I’m bluffing. I hated this movie; I wish I could unsee it and will it out of existence. But that’s not the same as thinking it’s worthless or corrupt or entirely inept. It’s more like a massively self-indulgent prank, inflicted on the world by some reasonably intelligent young men, which makes it the most bro-tastic project of all time. Mo’ bro than this, no es posible, amigos.

Like most of the voluminous comedy output from Rogen and his producing and writing partner Evan Goldberg (whose collaborations include the “Neighbors” movies, “This Is the End” and “Superbad”), “Sausage Party” has a stoned or unhinged quality that makes it seem less like a calculated commodity and more like the results of a late-night dare. You get the feeling that Rogen and Goldberg got baked on some seventh-generation Humboldt sinsemilla with Jonah Hill and James Franco and spent a long Hollywood evening challenging each other: You will not actually make a foulmouthed atheist cartoon featuring a same-sex interfaith relationship between bakery products! We will too! You will not have the “Jewish” bagel voiced by a non-Jew doing a circa-1971 Woody Allen accent (Edward Norton), and have the “Arab” lavash voiced by a Jewish actor (David Krumholtz)! Oh hell yeah, we will!

It tells you a lot about “Sausage Party” that the concept is so sloppy: Lavash is a flatbread eaten all over the Middle East, but is mostly associated with Turkey, which is a Muslim but not an Arab nation, and Armenia, which is neither. Never mind! Accuracy shmaccuracy, as Norton’s kvetching bagel would say! Rogen and Goldberg and their co-writers Kyle Hunter and Ariel Shaffir speed past all of that to give us the profane details of bagel-lavash sex, plus all their bickering about who’s occupying whose territory — in the supermarket aisle! Ha! Do you get it? Occupied territory … never mind. In case any viewer isn’t offended, we also get Krumholtz’s lavash expounding on his jihadi version of the afterlife in the Great Beyond, where he will be slathered with 77 bottles of extra-virgin olive oil. Wait, hang on — do you get that one? Want me to explain it?

See, much of the comic strategy at work in “Sausage Party,” if you experience it as comedy rather than simply as pain, is to pile up the offensive stereotypes so egregiously that we never quite notice that the story is really dark and has no place to go after its one big idea. Along the way to the Arab-Jewish homoerotic subplot we get eye-rolling detours through the Chinese and Indian aisles. Jars of sauerkraut have formed a fascist militia and want to exterminate “the juice.” Nope, not kidding. A Native American-ish bottle of “Firewater” (voiced by Bill Hader) dispenses fireside wisdom from his Vision Quest cave. Mr. Grits (Craig Robinson) is a jive-talking African-American. The fruit from, you know, the produce aisle are all big George Michael fans, if you take my meaning. Salma Hayek voices a sexy taco shell who feels forbidden urges directed at Brenda, the virginal bun played by Kristen Wiig. Bun! Get it? There is a formal and almost sculptural obsession with the female derriere at work in this film that goes immediately for the grotesque and stays there.

If you’re offended by some aspect of “Sausage Party” — and it seems like poor sportsmanship not to be, when they’ve worked so hard — then you reveal yourself as less cool and less irreverent than its creators, which is very likely the point. If you decline to be outraged because it’s simply not worth it, then the movie itself no longer has a point. Its observation that life is full of cruelty and there is probably no afterlife and we waste most of our lives consuming images of a reality we cannot fully apprehend is pretty much true, but neither novel nor amusing.

Most of the so-called plot is dispensable, and indeed would have been dispensed with in the eight-minute version of this movie that could have existed as a “Saturday Night Live” interstitial cartoon in 1991. Like any strapping young sausage, Frank yearns to get it on with Brenda the sexy bun. Oh, she likes him too, and they’ve fooled around a little at night, when the supermarket products come wiggling out of their packages and move around the store — a disturbing but convincing idea — but Brenda’s saving herself for their big moment of union in the Great Beyond. For supermarket products, it is culturally somewhere around 1957, and theologically more like 1887.

When a shopping-cart mishap sets Frank and Brenda free to pursue their own destiny (yes, sci-fi nerds, it’s roughly the same plot as “Logan’s Run”), they are pursued by an evil douche. No, he’s actually a douche, a garrulous feminine hygiene product voiced by Nick Kroll, and boy is all that stuff not funny at all. To no one’s surprise, James Franco, Jonah Hill and Danny McBride show up in “hilarious” cameo roles. (To be fair, Franco’s turn as a doomed human stoner is pretty good.) As for the actual animation, it has moments of cleverness but they feel recycled. I couldn’t shake the feeling that directors Greg Tiernan and Conrad Vernon had seen “The LEGO Movie” and “Inside Out” and told themselves: Yeah, let’s do that, but make the universe a supermarket! At least everybody got stoned — a lot, I’m thinking. But if that lavash guy doesn’t come clean to his Jewish boyfriend that he’s not actually an Arab, I don’t feel OK about it.