While it’s tempting to chalk up Trump’s comment to be another faux pas, the truth is much more sinister 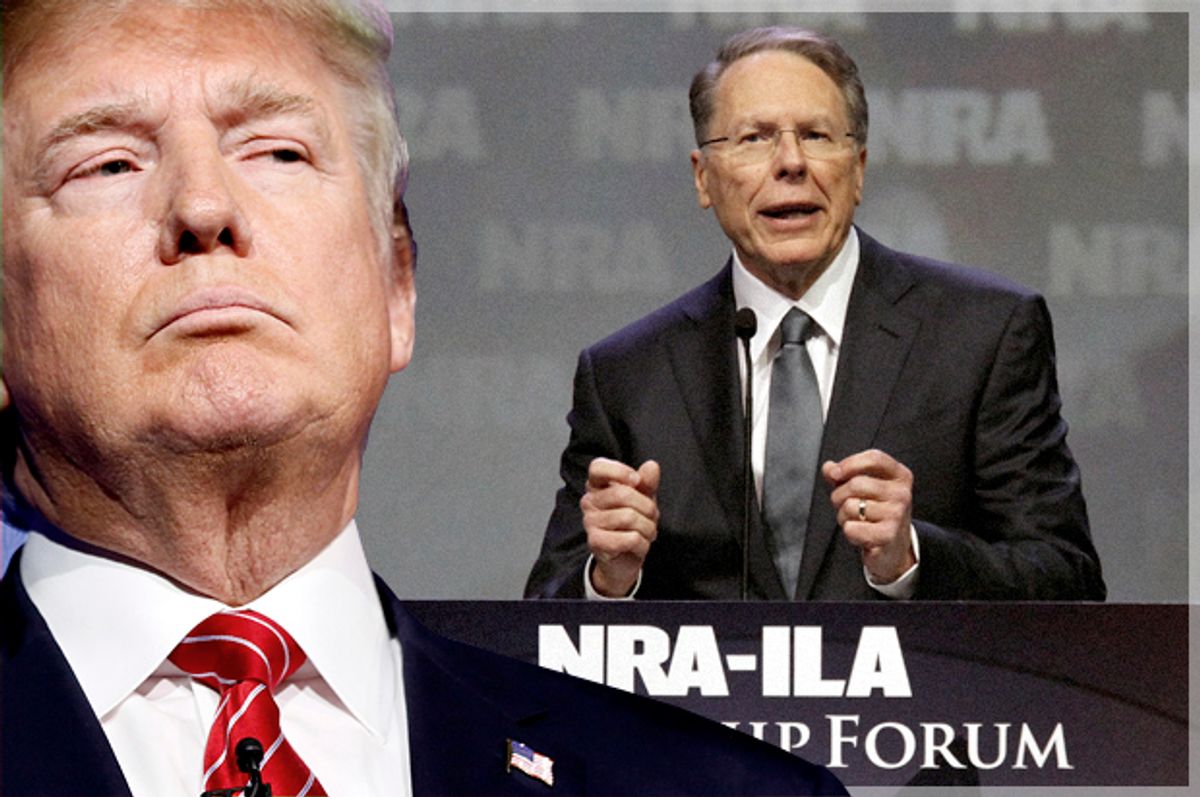 It was reprehensible for Donald Trump to insinuate that his pro-gun followers use violence to thwart Hillary Clinton. That said, was he really out of lockstep with what the NRA and other pro-gun groups have been saying for years?

Just to be clear, this is what Trump said:

“If she gets to pick her judges, nothing you can do folks. Although the Second Amendment people—maybe there is, I don’t know.”

Considering that this is a man who has already called on a foreign superpower to hack his opponent’s email server, it’s hard to blame Trump’s critics for sensing that he would transgress the bounds of propriety yet again by threatening violence. Besides, he didn’t just call for the “Second Amendment people” to galvanize in opposition to Clinton’s judicial picks or donate money to his campaign. First he characterized the event of a Clinton election as a hopeless situation (“nothing you can do folks”) and then suggested that Americans who believe in gun rights could handle it by … Well, he trailed off right there for a reason.

The problem for Trump is that, while he may have thought he was being coy, the NRA and other radical pro-gun groups have been filling in the blanks for years. Ever since control of the NRA was seized by right-wing extremists in 1977, that organization has become notorious for peddling an anti-government ideology, one that holds as its core premise the idea that a few good guys with guns can overthrow America’s so-called tyrannical state. Although they usually tie this claim to the hysterical fear that even modest gun control legislation will lead to mass confiscation of firearms, it has often been used more generally to oppose left-wing politicians and their causes. In the narrative of the pro-gun movement, they are the sentinels of American liberty … a self-conception that is inextricably linked with the threat of violence against those you deem to be enemies of your cause (not surprisingly — and only perhaps coincidentally — the NRA launched a $3 million ad campaign against Clinton mere hours after Trump’s remarks).

Now that Trump’s gaffe has brought these assumptions to the surface, it’s necessary to identify their two glaring weaknesses.

First, it is self-evidently absurd to believe that owning firearms could actually allow ordinary citizens to overthrow the entire American government. Our armed forces have access to nuclear weapons, tanks, drone missiles, and some of the most sophisticated surveillance technology known to man. Even our police force has been militarized to an unprecedented degree. Consequently, when the pro-gun movement claims that arming all of the militant-minded will empower them to violently replace our government, they are propagating a fantasy.

That said, while you can’t realistically overthrow the entire government with a personal arsenal, you can blow away individual politicians that you dislike. Although the NRA and other pro-gun groups don’t actively encourage assassinations, they don’t hesitate to use the iconography. This is why Sarah Palin got into so much trouble back in 2011 when it came out that she had superimposed an image of crosshairs over a map of Gabby Giffords’ district before the assassination attempt against the Arizona congresswoman. While the shooter, Jared Lee Loughner, wasn’t part of the pro-gun movement, that didn’t make the implied violence against her any less chilling. Even worse, individuals with guns are still capable of going on mass killing sprees for any number of reasons — be it allegiance to radical Islamist beliefs, misogyny, homophobia, or white supremacist ideology — because, while they may not be targeting politicians on those occasions, they still believe that what they do with a gun can make a political or social statement at someone else’s expense.

This is why, while it’s tempting to chalk up Trump’s “Second Amendment people” comment as just another entry in a long series of faux pas, it really is something much more sinister. Instead of injecting violence into a conversation where it had been absent, Trump has merely been explicit in voicing a sentiment that is usually articulated implicitly. If we’re going to direct our outrage constructively, we need to recognize the political culture from which Trump was drawing and demand that it be held accountable long after yesterday’s comments have been forgotten. Otherwise a day will soon come when people who think like Trump will do something far worse than merely say terrible things.