How Jeff Bridges built his fascinating body of work: "I tried hard not to develop too strong a persona"

Salon talks to the Oscar-winning actor about his music, famous family, The Dude & new film "Hell or High Water" 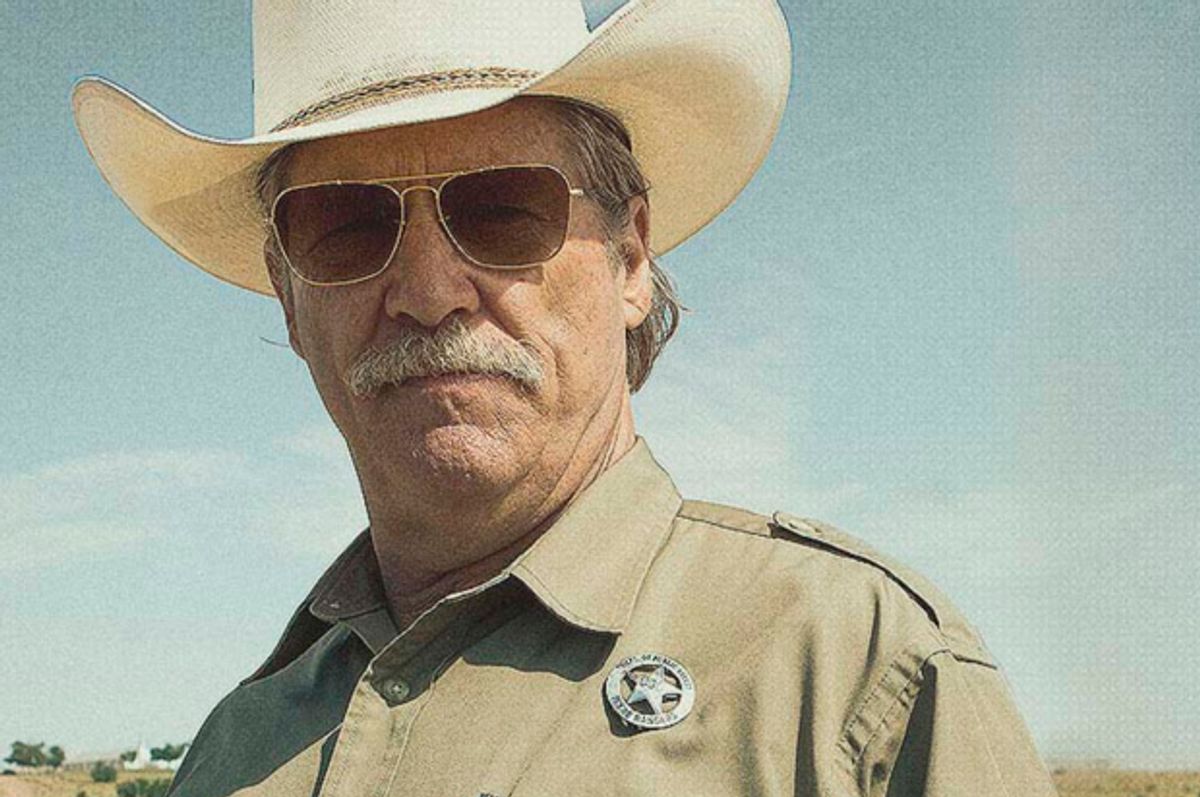 Jeff Bridges is a character actor in a leading man’s body. He may be better known for playing The Dude in “The Big Lebowski” than for his Oscar-winning turn as a country music star in “Crazy Heart.” Arguably, however, the actor’s most unforgettable performance is as an ex-con in the astonishing drama “American Heart.”

As an actor, Bridges is a true shape-shifter, moving effortlessly between low-budget indies and Hollywood blockbusters, comedies and dramas, playing villains and heroes. What makes Bridges the best thing in whatever he is in is his ability to continually defy expectations.

Consider his terrific new film, “Hell or High Water.” Here Bridges plays Marcus Hamilton, a Texas Ranger a few weeks from retirement, who is in pursuit of Toby and Tanner Howard (Chris Pine and Ben Foster, respectively). Bridges never makes Hamilton a cliché, putting a wry, comical spin on his intelligent character. He also creates plenty of suspense about how things will play out. The actor is eager to talk about Hamilton, but he insists we do not discuss the plot of the film. “It’s tough to discuss. I want to know as little as possible when I see a film. I’m sure you’re the same way. I want to be surprised.” Suffice it to say, “Hell or High Water” does not go in expected directions. Not unlike Bridges’ career.

The actor spoke with Salon about his iconic roles, his career longevity, the late Michael Cimino, and “Hell or High Water.”

You have given some amazing performances in films like “Cutter’s Way” and “American Heart,” but also “Starman,” “Fearless” and “True Grit.” What brings you to a film like “Hell or High Water?”

“Hell or High Water” is a smaller film. I’m up for doing a big-budget “Iron Man” where you get to play a super villain—that’s fun for me. I like to mix it up. My father Lloyd, growing up with him, he had “Sea Hunt,” where he played a skin diver. And he did such a good job people thought he was a skin diver. But the ramification of that was that he got a lot of skin diver roles. He was a versatile actor. He did Shakespeare and comedy. I saw how frustrated he was doing that [skin diver] persona. So when I started out, I tried hard not to develop too strong a persona. Loving movies myself, I know when I see a film with someone with a strong persona, it’s hard to overlay another character on top of that. I bring baggage to it. Early on, I tried to do a variety of roles so I could pleasantly confuse the audience, and let the people who finance the movies know I can play many things.

You mentioned “American Heart” by Mary Ellen Mark and Martin Bell. That was something that rang true. That film developed from an assignment Mary Ellen had, to do a photo essay. Then Martin made the documentary [“Streetwise”] and then we made the film. They were so familiar with the life that movie portrayed, it added a richness to it.

In “Hell or High Water” you play a Texas Ranger weeks from retirement. You inject the character with a laconic wryness. How do you not make Hamilton a cliché?

You know, so much has to do with the script. When I read this one, it jumped out at me. It felt so authentic and real. Taylor Sheridan [the screenwriter] must have known something about the Texas Rangers, and it turns out his cousin is a marshal in Texas, so that was true. But also… “Hell or High Water” is the kind of film I want to see. That’s what draws me to being in a movie. This one is filled with ambiguity—who you should be rooting for. That reflects the paradoxical nature of life. In addition, I had seen David McKenzie’s “Starred Up,” so I wanted to work with him.

Hamilton has smarts that belie his years on the force. How does playing a character of great intelligence compare to say, The Dude from “The Big Lebowski?” Both are crime solvers, but approach things in a very different way.

Whenever I can, I try to get a role model. I was fortunate on “Hell or High Water” to have [Haynie] Joaquin Jackson, a renowned Texas Ranger, on the set with us. I got a lot from him. A lot was subconscious. He gave me tips on attitudes and wardrobe, but hanging out with him and soaking up his personality helped.

For The Dude, I looked at myself, saw what I could use, and magnified it for the role. That’s the beginning, and then it’s what aspects of the character do I want to kick to the curb that don’t apply? For The Dude, I used a lot of myself, and the Coen brothers had a guy named Jeff Dowd who was their inspiration. We met and talked, but I didn’t base the role on Dowd too much.

You have played cops and criminals throughout your career. Do you have a preference? Or maybe you prefer to play a character like murder suspect Jack Forrester in “Jagged Edge,” who may be a hero or a villain?

I like both, not one more than the other. It’s interesting to explore the darker side, but the hero piece is interesting as well. It’s like choosing between comedy or drama. I like to do both.

What particularly impressed me about your performance was a key scene where Hamilton has to take a shot. There’s a tension in him to do it, but also a very palpable reaction/response after he fires the gun. Can you talk about how you portrayed this scene, which reveals so much about his character?

Yeah, a lot of that is in the script and hanging with Joaquin. Then there is just the acting of the scene, the “surprise” element; you can’t calculate how you are going to respond. So you let the emotion, in the process of putting yourself in the character’s position, you let it rip through your body. It’s a bit of an improvisation, really. You don’t know what’s going to happen.

Are you a good shot in real life?

Pretty good. In real life, I shot an M1 [rifle] in boot camp.

What can you say about Hamilton’s sense of humor? He has several sly, racist comments about his partner, Alberto (Gil Birmingham), that are amusing and insulting at the same time.

I come from a family of teasers myself. My grandfather was from Liverpool, and he had a dry sense of humor and he would tease us terribly. My brother Beau was so skilled in his teasing that he could get a rise out of me by simply pointing at me. My mother and father would explain it was affection—that Beau knew me so well he knew what buttons to push. But it’s tough being on the other end of that. That kind of teasing is prevalent. And it’s also how you’re raised and treated by your family. You witness your parents’ behavior.

Hamilton’s partner Alberto is constantly teasing him about his impending retirement. Do you think there will come a time when you’ll stop acting and focus on something else?

Well, I’m kind of doing that now in a way with this music thing late in my career—making it professional. I’ve been playing music since I was a teen, but “Crazy Heart” inspired me to get a band together, The Abiders. Unlike Texas Rangers, we actors don’t have a stop date, so I don’t know about retiring. Sometimes I want to stop acting, but then you get a good script!

With all you’ve done in your career, is there a part you always wanted to play, or an actor or director you wish you could/could have worked with?

Not really. I’m not one of those guys who has to play FDR. I like to be so inspired by a script that I’ve got to do it. I do my best to not engage in the scripts. I’m pretty fussy. That’s my method. I don’t have anything I’m dying to do. I wanted to use my music when “Crazy Heart” came along.

You also made beautiful music with “The Fabulous Baker Boys.”

Yes, “The Baker Boys!” Two first time directors, Steve Kloves for “Baker Boys” and Scott Cooper for “Crazy Heart,” and they knocked it out of the park!

Speaking of directors, is it too soon to ask you about working with the late Michael Cimino?

He was a wonderful director and I loved working with him. I did his first film, “Thunderbolt and Lightfoot,” with him, and then we made “Heaven’s Gate.” Both were different experiences and different films, but I’m happy “Heaven’s Gate” is getting more respect these days. It’s a beautiful film. I could go on about Mike. I live in Montana in the Hog Ranch that was used as the whorehouse in “Heaven’s Gate.” Mike gave it to me.