Trading places: If the Democrats are now a coastal elite party and the GOP are the populists, Trump is only the beginning

Yeah, Hillary will probably win. But unless Democrats can be more than the Whole Foods party, they're doomed 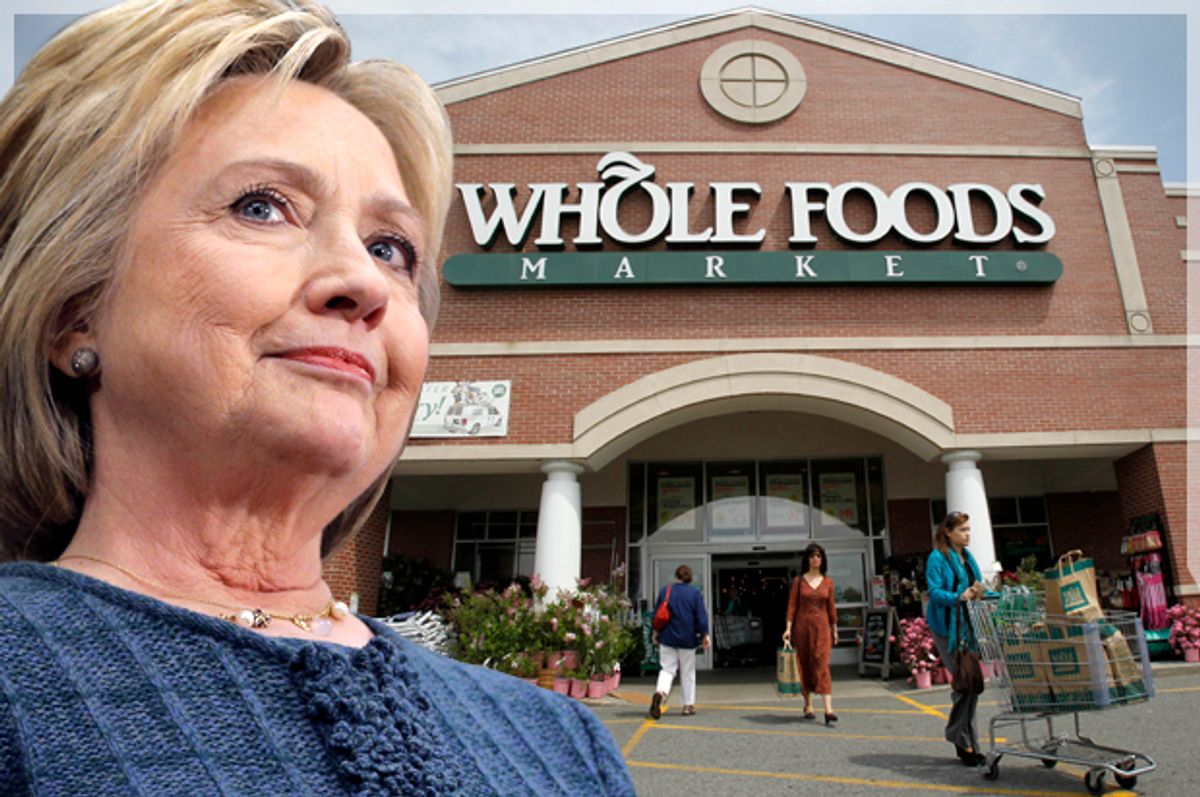 Are the two major political parties in America trading places, in demographic terms? Are Republicans becoming a populist party of the downtrodden and disenfranchised, while Democrats become the political home of the up-market urban elites? That may seem like too big a leap amid the intense divisions of 2016, when the Donald Trump distortion effect has so thoroughly warped the political landscape. But such a phase-shift has happened before, and there’s considerable evidence that it’s happening again.

Now that the aftermath of the political conventions has settled down and Trump’s campaign of self-sabotage has shifted into a new and spectacular gear, we once again confront the possibility that Trump himself will be nothing more than a bizarre footnote to the story of this extraordinary year. In his own limited and vainglorious fashion, Trump understands that: “I am your voice,” he told the GOP gathering in Cleveland. He is a ludicrous outrider of the apocalypse, not the thing itself. From here, it looks like our nation is on the verge of a political meltdown, and a political realignment, whose long-term consequences are unknowable.

I have a message for Democrats who look at Trump’s sliding poll numbers, in the wake of the Khan family feud and “Obama is the founder of ISIS” and “let’s try Americans at Gitmo,” and tell themselves that the nightmare is almost over and everything will soon return to normal. You are whistling past the graveyard. Hillary Clinton will very likely win this election, and it could end up as a blowout, although I’d be reluctant to bet the ranch on that. But what kind of "normal" are you so happy about? The paralysis and dysfunction of the entire last decade? To pretend that such an outcome — the candidate who is widely disliked and mistrusted defeating the candidate who is widely feared and despised — does anything at all to address the structural and ideological crisis that is eating away at both parties and the bipartisan system represents an epic level of denial.

You know who you are, oh nice people who feel vaguely wounded right about now! Despite the Bernie Sanders insurrection and the fact that the Democratic Party has been electorally eviscerated between the coasts and has hit a historic low point in terms of voter self-identification, you have somehow convinced yourselves that nothing fundamental has gone wrong and it will all be OK. I mean, yours is the party of good government and rational foreign policy and tolerance and diversity, right? Once you get past this unexpectedly ugly (and unexpectedly disturbing) election and park Hillary in the White House, the future is secure.

Just because the news cycle will be almost exclusively occupied with Trump and Clinton for the next 11 weeks, and one of them will apparently end up as president, it doesn’t follow that they’re the most important people on the stage. Clinton’s supposedly major economic address this week was especially awkward: She did her best to finesse her way around an entire career of supporting free trade, globalization and financial deregulation, in a year when those things have suddenly become toxic. No one should ever believe the vague economic promises made by presidential candidates, but even by those standards Clinton’s second-rate Bernie Sanders ventriloquist act was unconvincing.

The conventions I recently attended in Cleveland and Philadelphia reflected parallel institutions in different stages of internal decay and discord. Both were profoundly troubled events, dedicated to fending off certain unpleasant aspects of reality. The real protagonist of 2016 has been the American electorate, which was confronted with a set of unpalatable choices and has made a series of decisions that may have been incoherent or self-destructive but were not entirely irrational. It has expressed its widespread dissatisfaction with the status quo, at the very least, although there’s nothing even close to a collective sense of what to do about it.

From the beginning of this electoral cycle, I’ve been fascinated by two emerging and interconnected phenomena, both of which are essential to making sense of this crazy year. One is that the Republican Party has suffered an ideological implosion, despite its near-total stranglehold on Capitol Hill, and that the Democratic Party is not far behind. The other is that the Sanders and Trump movements, despite their opposing ideologies, share a perspective on the oligarchic nature of power in America and have exposed what Lenin identified a century ago as a central contradiction of “bourgeois democracy.”

Capitalist society, the Bolshevik founder observed, produces a “liberal” understanding of individual rights and tends toward legal and political equality for all its citizens — equality in the marketplace, in other words. Along with that comes the implication, and often the direct promise, that such marketplace equality will ultimately produce greater levels of social and economic equality as well. But the opposite is true; the two species of equality are in opposition, not in harmony. Unfettered market capitalism concentrates economic power in the hands of a few and dramatically worsens inequality, producing an atmosphere of political and economic crisis that Lenin would have called a “revolutionary situation.”

There’s no Leninist “vanguard party” in place to take advantage of such a situation (whatever they may claim on Fox News), nor am I advocating such an approach. What we have instead are two political parties in profound crisis. One of them has been compelled, however reluctantly, to confront the fact that its electoral coalition has collapsed and that its downscale white voters and zillionaire corporate funders have entirely different desires and goals. The other one is simultaneously in better shape and worse shape: It has won electoral pluralities in five of the last six presidential elections, which has allowed it to ignore the crisis or pretend it doesn’t exist.

Hillary Clinton and her wing of the Democratic Party represent Lenin’s contradiction, and still deny that it’s a contradiction. They stand for women’s rights and LGBT rights and combating “systemic racism,” and there’s no reason to doubt their sincerity. But as Thomas B. Edsall wrote in the New York Times this week, the Democrats are no longer a “class-based coalition” with an economic agenda, but a loose coalition of “upscale well-educated whites” and African-American and Latino voters in big cities. They are the party of many flavors, all of them for sale at Whole Foods. Some connection is assumed between the culture-war and identity-politics issues at the heart of the party’s current identity and universal economic progress, but how that connection might work in practice remains unclear and essentially metaphysical.

Edsall’s column flew through the political discourse almost unnoticed; it had nothing to do with Trump’s outsize personality or his outrageous utterances. But it might be the single most far-reaching journalistic analysis of this mad summer season. There has been a total “class inversion” among white Democratic voters, Edsall writes, since the era when Hillary Clinton’s husband ran for president. In 1992, Bill Clinton defeated George H.W. Bush by large margins among voters making less than $50,000 a year and among those with high school educations or less. Bush won narrowly among college-educated voters, and carried those making $100,000 or more by 16 points.

In an Aug. 1 CNN poll of this year’s Trump-Clinton race, that 1992 situation has been turned upside down: Clinton wins 57 percent of college grads and 55 percent of voters with incomes above $50,000. She and Trump are in a statistical dead heat among less affluent voters and those without college degrees, and it’s safe to conclude that Trump is far ahead among whites in those categories. I can feel Democratic loyalists converging around the idea that racism and xenophobia are the primary factors, and perhaps the only factors, driving support for Trump among working-class white Americans, and that the sense of dislocation and disenfranchisement those people feel is either imaginary or irrational.

No one should discount the role that bigotry has played in this election. Republicans have preyed on racial fears and culture-war conflicts for decades, and the Trump campaign has forced those issues to the surface. Racial resentment and flag-waving jingoism are the unifying flavors in Trump’s secret sauce. But were poorer white Americans less racist 24 years ago, when most of them voted for Bill Clinton? Blaming downscale whites for retreating into prejudice is a transparent effort to evade the fact that the Clinton New Democrats gutted the FDR welfare state (“the era of big government is over,” Bill told us) and “abdicated too easily to market fundamentalism,” in the words of Harvard scholar Dani Rodrik.

But the Democrats’ predicament goes beyond the fact that they jettisoned class-based economic populism in favor of a whole package of free-market policies aimed at liberating the global flow of investment capital, and that the carnage of that Bill Clinton-era decision is all around us. As Edsall says, the party is becoming “increasingly dependent on a white upper middle class that has isolated itself from the rest of American society.” That’s what I perceived in Philadelphia: a party with an agreeable multicultural roster, pathologically devoted to the proposition that nothing was wrong with America that a little sensitivity training and Kombucha can’t fix. If Trump voters perceive the Democrats as “the party of the winners,” a cosmopolitan coastal coalition with no cultural, geographical or social connection to working-class America, they have a point.

If the party of the winners is likely to win this November, largely by default, the question of what lies ahead is murkier. Partisan reversals and inversions are hardly unknown. As we know from history, the Democrats were the pro-slavery party (or at least the non-anti-slavery party) in the 19th century, and the white supremacy party well into the 20th. They represented the “less educated” — the white immigrant working classes in the North, white farmers and small business proprietors in the South.

Republicans, on the other hand, were the party of the affluent Northern elite and Midwestern middle-class Protestants; they were “liberal” on trade and economic policies (as opposed to protectionist or interventionist) and at least theoretically supportive of women’s rights and civil rights. Until at least the Great Depression, the small proportion of black Americans who were allowed to vote almost unanimously supported the party of Lincoln. It’s not coincidental that the first woman to be elected to both houses of Congress (Margaret Chase Smith) and the first African-American elected to the Senate (Edward Brooke) were both New England Republicans.

Democrats shed the white South some decades ago, and have almost completely absorbed the old Northeastern Republican establishment. You could argue that Hillary Clinton’s Democratic Party effectively is the old Republican Party, translated into the cultural and demographic terms of the 21st century. That has left an immense political vacuum at the bottom end of the socioeconomic ladder, where left-wing populism and right-wing populism — Bernie Sanders socialism and Donald Trump nationalism — will fight for the future.

Hillary Clinton’s economic ventriloquism can’t fill that vacuum, and the unanswered question is whether the Republican Party can reconfigure itself as a new version of the old Democrats, with the racism and xenophobia damped down a little. The real danger that lies beneath Trump’s Republican revolution is not Trump himself, but the more adroit figure -- the less Trumpian Trump -- who is sure to follow.