The medical debt crisis: The prognosis is still dire for Americans struggling to pay off massive health care bills 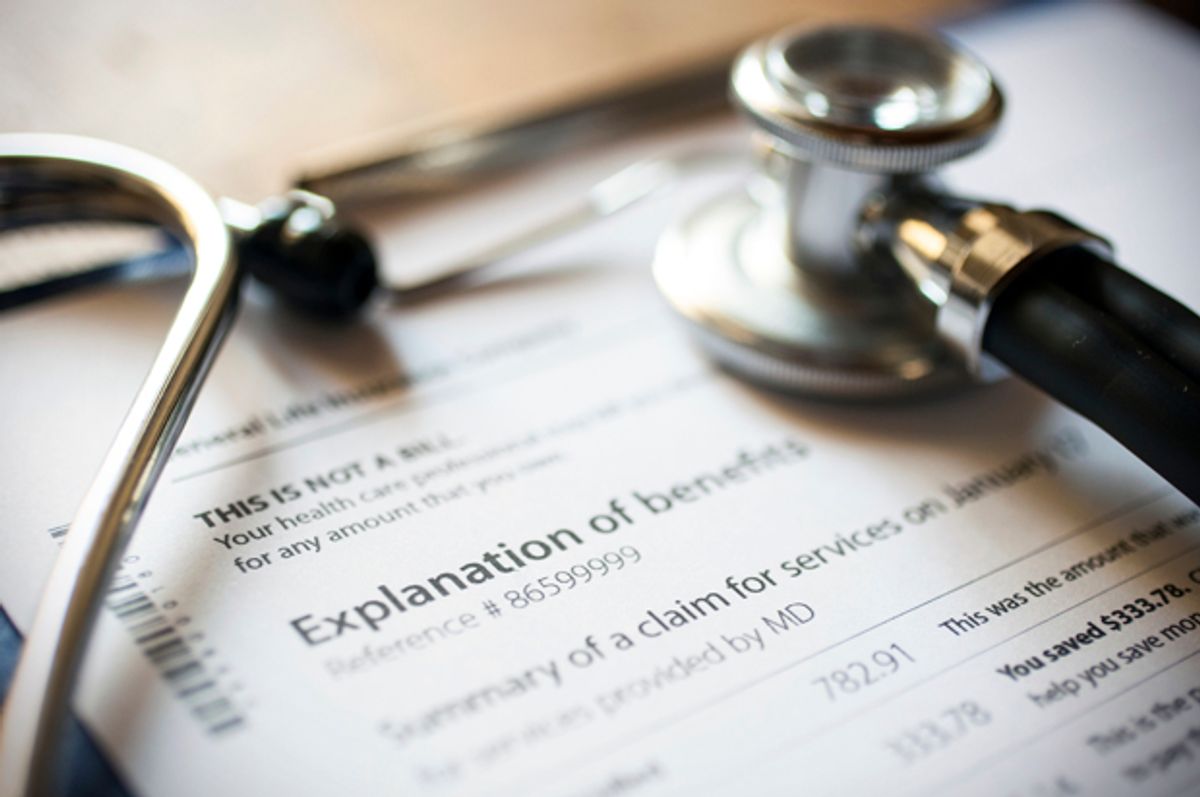 Recent evidence suggests that the Affordable Care Act is helping to reduce the burden of medical debt for American consumers. Yet, especially in states that have not expanded Medicaid, millions of Americans still lack insurance and many plans offer thin coverage. The result is that in 2014, 64 million people were struggling with medical debt, the leading cause of bankruptcy in the United States. In my latest Demos report, “Enough to Make You Sick: The Burden of Medical Debt,” I explore how medical debt affects household finances and why we need more aggressive policies to reduce medical debt.

My report details the results of two surveys (in 2008 and 2012) Demos commissioned to explore the finances of lower to middle-income households carrying credit card debt. I find that households carrying medical debt on their credit card are more likely to take extreme measures to pay off their debts and forgo care. Medical debt has significant negative impacts on household finances, even when people are insured. A public option could help reduce the chances of people taking on medical debt, and that more rigorous consumer protection could mitigate the consequences.

I compare the 2008 and 2012 surveys to find trends in credit card debt. Among those with medical debt on their credit card (the “medically indebted” for the purposes of my report), average total credit card debt fell from $11,019 in 2008 to $8,762 in 2012, a 20 percent decline. Medical debt alone fell from $2,055 in 2008 to $1,679 in 2012, an 18 percent decline. One likely source of these declines is the Credit Card Accountability Responsibility and Disclosure Act (CARD Act). Studies show that the CARD Act dramatically reduced fees for credit card users. Research by the Consumer Financial Protection Bureau suggests the CARD act reduced hidden credit card fees, saving consumers billions of dollars. Households are also carrying less credit card debt due to out-of-pocket medical expenses and medical debt that is not on credit cards. It’s possible the Affordable Care Act played a role, but many of its key provisions hadn’t been in effect for long enough to conclude that they played a major part in the decline. However, these declines could also be explained by the improving economy. While the situation has become rosier across the board, my research suggests large negative impacts for households that are carrying medical debt. How to Fix the Problem

There are several possible legislative options to reduce the impacts of medical debt. For instance, the CFPB could create protections and a process for consumers to challenge medical debts improperly added to a credit report, or require that individuals be given notice before a debt is added to their credit report.

There are also legislative options. The Medical Bankruptcy Fairness Act, proposed by Senators Sheldon Whitehouse (D-RI) and Elizabeth Warren (D-MA), would help families dealing with medical debt keep their homes by providing them with bankruptcy protection, and would forgive student debt. It also waives the unnecessary and offensive requirement that individuals who file for debt relief receive credit counseling, if the debt is medical-related. The Medical Debt Responsibility Act, introduced by Senator Jeff Merkley (D-OR) and Rep. Maxine Waters (D-CA), would require that fully paid medical debt be removed from credit reports within 45 days.

These smaller reforms would have big impacts on many households, but there are also bigger potential reforms. Although the Affordable Care Act is an important piece of legislation, it still leaves many Americans uninsured. A public option, by acting as an insurer of last resort, could close that gap. In addition, a public option would be in a strong position to negotiate with healthcare providers, driving down costs. Research finds an estimated “reduction in collection balances of around $600 to $1,000 among those who gain Medicaid coverage due to the ACA.” This suggests that if more states expanded Medicaid, it would also alleviate medical debt. Although insurance doesn’t prevent medical debt from ruining lives, there is evidence that it reduces the incidence of medical debt. In a recent op-ed, President Obama argued for a public option. A medical crisis can strike a household at any time — it shouldn’t drive them into bankruptcy or poverty. In other wealthy countries, it rarely does. Another painful example of American exceptionalism.