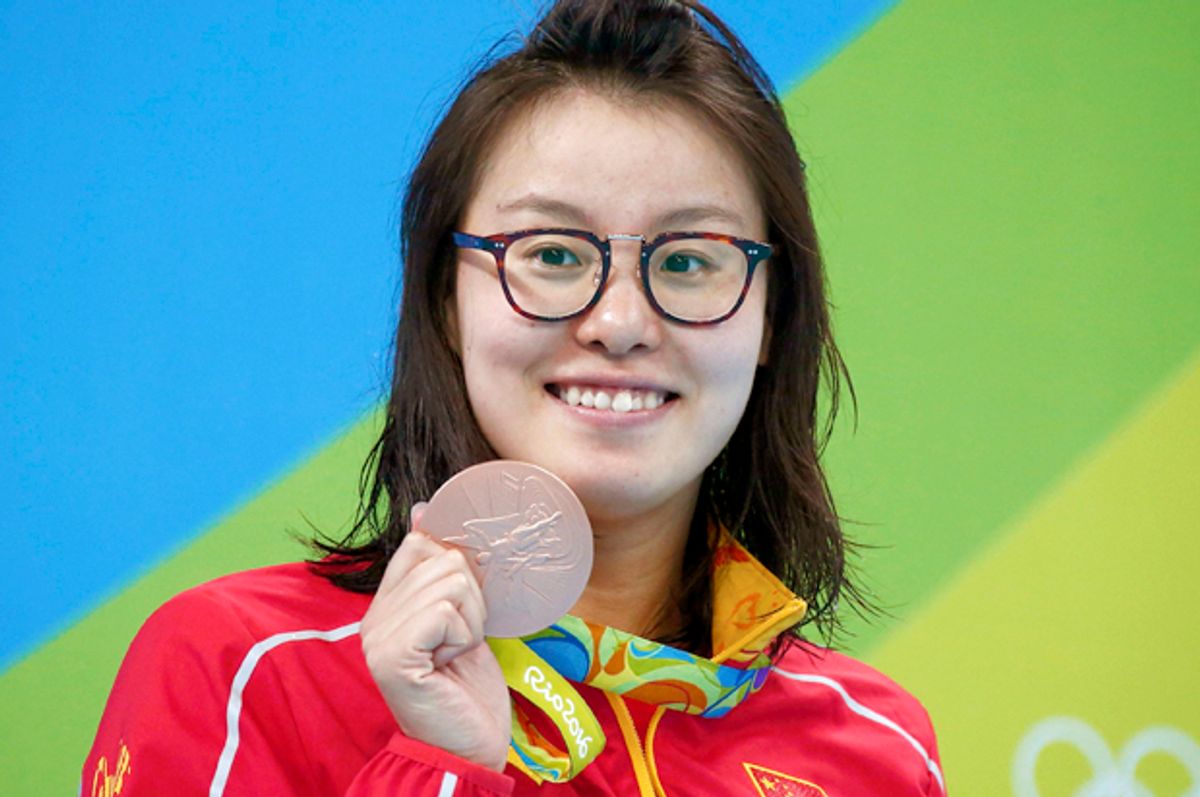 Women have been competing at the Olympic games for 116 years now. They've been swimming in them for almost as long. And guess what? They've been getting their periods the whole time. Yet when China's Fu Yuanhui daringly admitted this weekend that she was menstruating, it made headlines around the world.

The 20-year-old, who'd already earned a bronze in the 100m backstroke — and a solid fan following for her exuberant persona and expressive reactions — opened up during a post-race interview after the team's narrow loss in 4x100-meter medley relay Saturday. As The New York Times notes, she'd immediately drawn polite speculation of a "stomachache" from an interviewer after she was seen "crouching" and "grimacing in pain." Okay, so we've got a 20-year-old woman crouching and grimacing in pain, yes, let's diagnose that as a "stomachache."

But Fu wasn't having it. Instead, she candidly explained, "It’s because I just got my period yesterday, so I’m still a bit weak and really tired. But this isn’t an excuse for not swimming well." It was a groundbreaking moment in Olympic history, a rare acknowledgment that women get periods and periods, as women know, can really affect your day. A 2015 Telegraph report revealed that new research suggests up to half of all female athletes feel their menstrual cycles affect their performance.

Taboos around menstruation have been difficult to break. And in Fu's country, tampons are not manufactured, and ads for period products are banned from primetime and lunchtime viewing because they're considered "disgusting." The country's first domestically-produced tampon is set to go on sale later this month — 80 years after tampons were introduced in the U.S.

A 2015 survey reports that only 2 percent of Chinese women use tampons — an astonishing statistic when you consider the powerful performances of Chinese women in athletic competition. The Times says that number is so low "because it is widely, and falsely, believed that [tampons] can rob a woman of her virginity." And on Weibo, one user summed up the shock of Fu's admission by saying, "Someone accused Fu of lying, asking how she could have gone in the water on her period. Chinese people have prejudices about tampons – as a woman over 30, I’d been ignorant, and full of fear, about tampons until now too."

It's not just China. Earlier this month, a sign from a Tbilisi, Georgia gym went viral for advising, "Dear Ladies! Do not go to the pool during periods." On Instagram, meanwhile, photographers post images of accidents and post surgical scars, but last year when poet Rupi Kaur shared an image of her with her period stains, it was swiftly removed because "It doesn’t follow our community guidelines." And in many places around the world, women and girls are deprived of the opportunity to go to school or work because of lack of appropriate hygienic products and sheer persistent ignorance.

Yet increasingly, more women are speaking out about this entirely normal part of the human experience. Last year, runner Kiran Gandhi did the London Marathon on the first day of her period, and boldly chose to do it without a tampon. Writing later in the Independent, she explained she and her friends "ran for women who can’t show their periods in public and for women who can’t compete in athletic events." But when Heather Watson admitted in 2015, after losing her Australian Open round, that she'd been dealing with "girl things," CNN concern-trolled, "How much information is too much information?" And last year marathon great Paula Radcliffe — who ran the 2002 Chicago marathon during her period — spoke out against the British practice of giving female athletes norethisterone to delay their periods, saying, "Too often in sport, doctors are men and they don't understand."

As mind-boggling as it is that these things need to be said: women get periods. They get periods as they break Olympic records and collect their Academy Awards and run for Congress. It's not shameful. It's not a secret. And the next time someone says that Ginger Rogers did what Fred Astaire did but backwards in heels, remind them — yeah, and during her period, to boot.