Running the streets: A tale of three surprisingly different street gangs around the world

Gangs in Glasgow, Chicago and Hong Kong have very little in common, but you wouldn't know it from media coverage 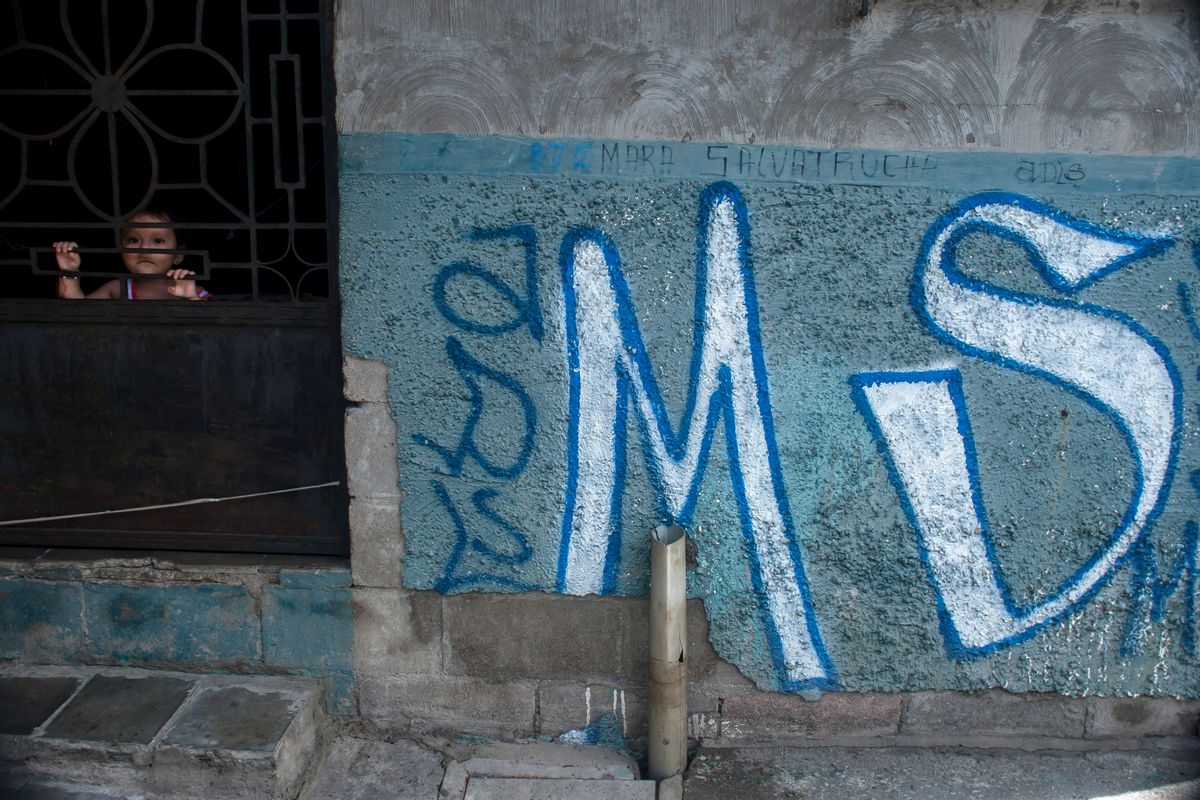 In this June 21, 2016 photo, a child peers from behind the door of her home, covered with Mara Salvatrucha gang graffiti, in Soyapango, El Salvador. After becoming the world's murder capital last year and posting an equally bloody start to 2016, El Salvador has seen its monthly homicide rates fall by about half. The government attributes the drop to a tough military crackdown on the country's powerful gangs, while the gangs themselves claim credit for a nonaggression pact between the three biggest criminal groups. (AP Photo/Salvador Melendez) (AP)
--

It can sometimes seem like there are gangs everywhere you look. At the Rio Olympics, fears of gang-related violence have resulted in intensive security — much as in London four years ago. In Brussels, gang rivalries are the subject of a new film called Black, which paints a picture of multi-ethnic street culture and migrant exclusion.

In Chicago, a new book has documented the relationship between organized crime and street gangs in the city. In the United Kingdom, racial stereotypes about gangs are being used in courtrooms to justify “joint enterprise” prosecutions aimed at convicting people of crimes by association.

Yet are all these people talking about the same thing? Having spent large amounts of time with street-based youth on three continents over ten years, the reality is more complex. The “young teams” of Glasgow, the “institutionalized gangs” of Chicago and the “night drifters” of Hong Kong are very different from their stereotypes in the media or courtroom. They are also sufficiently different from one another for it to make little sense to cover them with a single definition of gangs — let alone laws or policies.

I began my fieldwork in Glasgow volunteering for several years in a youth project in a part of the city with a reputation for being home to gangs. I learned that things were very different from what I’d expected. It wasn’t structured or hierarchical like a club, but more about being attached to a local area and continuing street-based traditions from the past — a “hand-me-down” from generation to generation that reflected community and identity as much as crime and violence.

I heard of children incorporating gang identity into their street games, lining up toy soldiers against one another and giving them gang names — just as they would chase one another over the territorial boundary of their neighborhood gang. As they grew up, some would fight over the same boundary or spray gang graffiti. Most grew out of it, though.

Where in other cities gangs have gradually developed into more organized criminal operations, the Glasgow equivalent seem to have stayed mostly youthful and unorganized. It is true that this has not always been the case — the Beehive Boys in the 1930s and the razor gangs of the 1960s come to mind — but these are the exceptions. Some of the same gang names reported in the early 20th century are still around today, and what they represent has not fundamentally changed.

Visiting Chicago for three months in 2009, I thought the gang scene would be the same. Glasgow and Chicago are both former second cities founded on heavy industry, with persistent patterns of poverty and structural disadvantage. My time with some local people in a community with high levels of violence in west Chicago blew this out of the water, however.

Sitting on milk crates on a warm autumn afternoon, a man told a story of his son recently being robbed and shot in the back. The boy was dealing drugs on the corner and had been taken for all he had. There had been retaliatory shootings and a war was brewing. The man was defiant and vicious in his talk of vengeance.

In Chicago, the youth groups functioned as a type of institution in severely marginalized communities. They may have started as adolescent groups, but decades of mass imprisonment, the war on drugs and urban disenfranchisement had seen them develop into something else. When I told the man about my Glasgow fieldwork, he didn’t believe there could be youth gangs with no guns, who didn’t deal drugs or make much money.

The view from Hong Kong

In Hong Kong, things were different again. I lived and worked there for four years and spent time with a social-work outreach organization that worked with so-called “young night drifters” thought to be at risk of joining local gangs. They colonized the night in much the same way as street gangs elsewhere, yet when we talked to some in a children’s playground at 3 a.m. one night, it was very different to meeting their Glasgow or Chicago equivalent. These young people were discussing strategies to improve their chances of getting to university.

During my time in Hong Kong, I also struggled to square the circle of a heavy triad presence and the low levels of street crime — not exactly what those that have seen the likes of Hong Kong triad flick Young and Dangerous might have expected. Ultimately it seemed linked to the fact that the triads bought into the need for social order.

Triad organizations were embedded in some housing estates and their local “dai lo” (or boss) sometimes approached groups of young people on the estate to carry out tasks. Crime might be part of these activities, but violence would be kept to a minimum to avoid disrupting the community. On one night, for example, I arrived in an estate in the midst of a skirmish between rival groups. Eventually the dai lo came out and told everyone to go home — and they did.

These experiences demonstrated to me that to understand gangs, it is important to start from ground level and the everyday experiences of young people. Gangs take numerous forms and local realities should prevail over global stereotypes.

All over the world, gangs seem to form as a defensive response to economic disadvantage. Yet they develop different meanings in different cultural environments and are often as different from one another as they are from the stereotypes. They can be pro-social and community-oriented as well as violent. They are also often a convenient scapegoat, misunderstood and misrepresented, used to justify punitive measures against young people.

So next time you hear the word “gang,” question it. Don’t take it at face value. Push back against it. Ask what it means to young people and why it matters.