Patty Hearst's America: What "American Heiress" gets wrong (and right) about an insane time and place

A new account of the legendary kidnapping makes a gripping read, but the true madness of '70s California gets lost 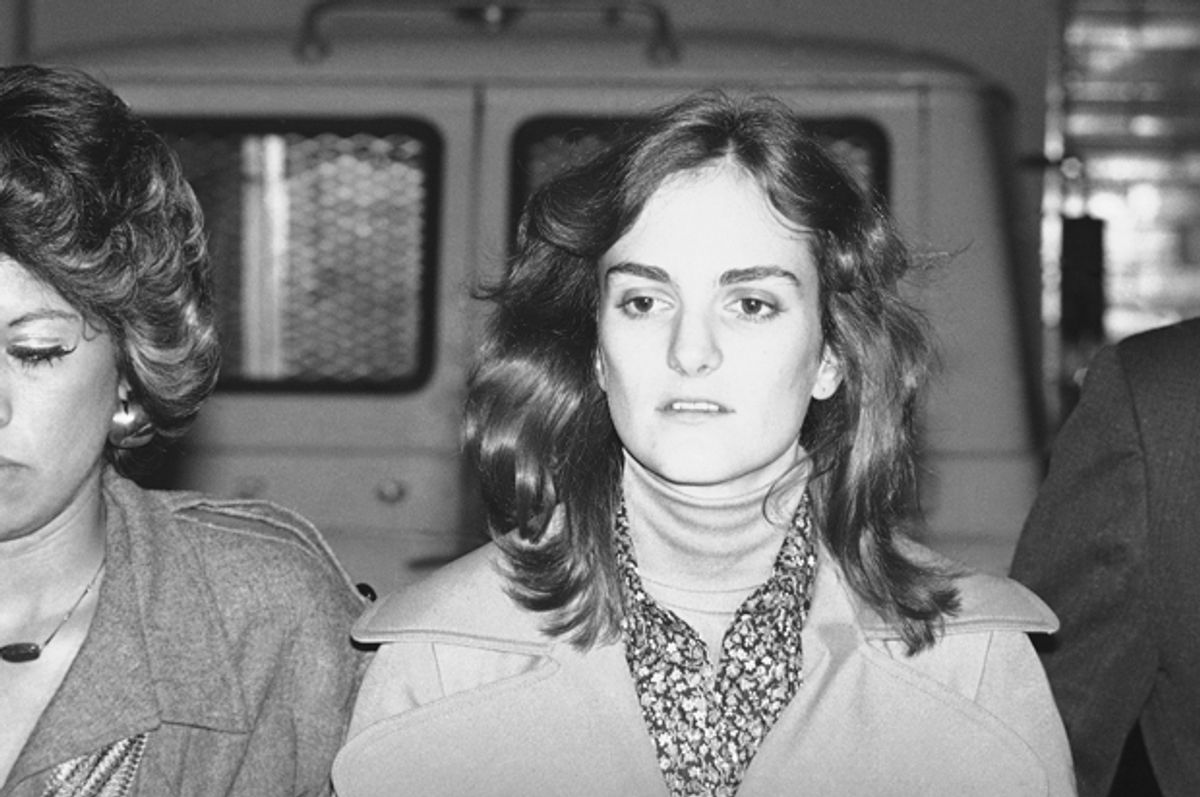 One thing I learned from Jeffrey Toobin’s book “American Heiress” that I hadn’t known before was that Patty Hearst always preferred to be called Patricia. Her father, newspaper publisher Randolph A. Hearst, repeatedly addressed her by the family nickname when speaking to reporters in the driveway of his mansion in Hillsborough, California, an exclusive suburb south of San Francisco. So she became Patty in the national consciousness forevermore. (Her grandfather was the legendary William Randolph Hearst of “Citizen Kane” infamy.)

Almost everything else about the Patty Hearst kidnapping of 1974 and the alternate universe of the San Francisco Bay Area in that decade, when implausible and apocalyptic events became routine, is so seared into my memory that reading Toobin’s book was a dreamlike experience. Running across certain details of Hearst’s ordeal or tidbits of information about the Symbionese Liberation Army, the band of self-appointed revolutionaries who abducted her, I would ask myself, How could Toobin have possibly known about that?

The answer is that Toobin knows such things because he is a polished delivery system for judicious but fast-paced nonfiction bestsellers. His best-known books are probably “A Vast Conspiracy,” about the Monica Lewinsky scandal, and “The Run of His Life,” which became the basis for the TV series “The People v. O.J. Simpson.”

But that answer is not personally satisfying to me. On the level of conscious knowledge, I understand that Patricia Hearst is a real person, as were Donald “Cinque” DeFreeze and Patricia “Mizmoon” Soltysik and the rest of the SLA members whose exploits I devoured in the San Francisco Chronicle and the Berkeley Barb. What those people did has already provided the fodder for numerous books, movies, magazine articles and half-baked tabloid TV specials.

But on some deeper level, I don’t perceive them as historical figures but as artifacts of my childhood, local characters my parents almost knew or might have known, whose significance I have exaggerated. One of my high school classmates, who went on to become a writer and performance artist in San Francisco and New York, did a “Tania” impersonation while running for student council sometime around 1979, going onstage at a school assembly wearing a beret and carrying a toy machine gun. That, I suppose, was exactly the moment when revolution turned into revolutionary kitsch. (If you’ve encountered that anecdote somewhere else, yeah, it’s still mine.)

While reading “American Heiress,” I began making lists of all the points of random intersection. Patricia Hearst was kidnapped from an apartment building on Benvenue Avenue in Berkeley, where my dad bought a 1968 Opel Kadett from another resident a few years later. (It cost $250; I’m still mad at my brother for blowing out the engine.) She briefly worked a summer job at Capwell’s department store in downtown Oakland; so did I, about a decade later. Soltysik worked as a janitor at the Berkeley Public Library, where I went after school several times a week. Most of the SLA’s core members met at a state prison in Vacaville, about 50 miles east of Berkeley; today my brother is a chiropractor there, treating the workplace injuries of corrections officers.

But the milieu that makes the SLA and the Hearst kidnapping seem like a mythical or fictional phenomenon goes beyond childhood memories. Those things belong to a vanished era when “The Lord of the Rings” and “Dune” largely remained the provinces of disreputable geek subculture, when the internet (not generally called by that name) was available via teletype printout at the Whole Earth Access store on Shattuck Avenue, and when owning even one David Bowie album marked someone as almost certainly as gay or bisexual. Those may seem irrelevant or trivial correspondences, but I don’t see them that way.

When the SLA kidnapped Patricia Hearst from the Benvenue Avenue apartment in February 1974, it was, as Toobin has made clear, a shocking political crime nearly without precedent in American history. (One has to go back to the “Lindbergh baby” case in 1932 to find anything similar.) It was also a landmark cultural event,  a symbolic event in the true meaning of that word — which is an aspect that Toobin perceives less clearly.

As the book’s title suggests, Toobin has presented Patricia Hearst as the central protagonist in a story of abduction, captivity and survival, and he has done an exemplary job of treating the unanswered questions about her fairly. Was Patricia’s transformation into “Tania,” the SLA bank robber and revolutionary, voluntary or coerced? Was it Stockholm syndrome or a desperate impersonation? Was her intimate relationship with Willy “Cujo” Wolfe, one of her kidnappers, consensual or a matter of rape and sexual enslavement?

As Toobin says in the book, by contemporary standards, no reasonable level of consent exists for a person who has been abducted, blindfolded and imprisoned in a closet for several weeks. If Hearst is taken at her word, she was compelled to have sex with Wolfe and also raped by DeFreeze. (Bill and Emily Harris, the only surviving members of the SLA, have denied this.) Concerning the larger question of “Tania’s” authenticity, Toobin has delicately ducked the issue, suggesting (correctly, I would say) that there is no clear yes-or-no answer. Hearst later insisted that she never believed in the SLA’s goals and methods, let alone its crackpot mishmash of revolutionary ideology but suspected the group might kill her if she didn’t play along.

But there is no evidence that even DeFreeze, the SLA’s unstable leader, ever contemplated murdering Hearst: He understood clearly that she was invaluable as a potential trade commodity and then as a propaganda tool. Furthermore, he must have known that his life, and those of his entire group, would be forfeited if Hearst came to harm. Considering what happened on May 17, 1974, when DeFreeze and five other SLA members died in a massive firefight with police in South Central Los Angeles, that was a highly reasonable belief. That shootout was the first such event carried on live television in the United States, so it was a turning point in media history as well.

Patricia Hearst did not cooperate with Toobin during the writing of “American Heiress” and has expressed her unhappiness with the book. Among other things, Toobin referred to letters Hearst wrote after her release that suggested she still subscribed to the SLA cause and still had feelings for Willy Wolfe, who had died in the L.A. shootout. But in the book Toobin never takes the position that those letters, or anything else Hearst said or did, prove anything in particular, except that a young woman from a privileged background who had been abducted at age 19 and spent a year and a half in a far-left underground cult group was extremely confused about the world and her place in it.

But Patty or Patricia or Tania is not the real protagonist of this story, I would argue. Although he did not get any important facts wrong, Toobin’s book has managed to put the cart before the horse at least a little. Hearst herself is less important than the SLA, and that malignant revolutionary army with no followers was the product, even perhaps the manifestation, of a specific time and place. If America in the 1970s seems like a fantasy universe, incomprehensibly different from the country of today, the Bay Area was a fantasy inside the fantasy. Another world was possible, as a later generation of radicals would put it, and some people believed they were living in it. Whether that world was a nightmare or the first faint glimmers of a stillborn utopia is entirely a matter of perspective, as it was at the time.

While the Hearst kidnapping transfixed the Bay Area in 1974, and to a lesser extent the entire country, Toobin’s contention that it was a unique or anomalous event doesn’t entirely ring true. If one were to stack each of the crazy things that happened in California in the ’70s one on top of another — any one of which would spark a national panic today, followed by the immediate dissolution of Congress and the imposition of military dictatorship — one gets a stack of crazy reaching to the moon and back.

This was the era of the Zodiac killer, who wrote taunting letters in code to San Francisco police (and who was not, I believe, Ted Cruz), and the “Zebra killers,” militant Black Muslims who murdered white people at random. The Vietnam War had come to a humiliating end less than a year before the Hearst kidnapping, and Richard Nixon would resign in disgrace six months later. Gas lines stretched for miles, especially in car-crazed California; the federal government tried to contain runaway inflation with mandatory wage and price controls. Within two years, a massive statewide drought would compel water rationing. Two years after that would come the Jonestown massacre in Guyana, and the shootings of Harvey Milk and George Moscone at City Hall in San Francisco.

In other words, by the time my friend Jennifer performed her Tania shtick on the stage of the Berkeley Community Theater — where I also saw the Clash perform, probably that same year — the story of Patty Hearst really had receded into the background clutter of California insanity and become kind of a joke. The earnest but deranged Berkeley radicals of the SLA (all of them white except their supposed leader, a career criminal whom Toobin calls a “junior varsity” version of George Jackson, the prison prophet of 1960s) were a joke. So was their ludicrous vision of revolution — along with the simultaneously hysterical and incompetent reaction from officialdom. The bewildered finishing-school princess with a submachine gun was a joke, and so were her anguished old-money parents, Manhattan-via-San Francisco socialites who were not nearly as wealthy as the world supposed. (Randolph Hearst nearly bankrupted himself trying to fund the food giveaway program demanded by the SLA and had to beg the Hearst Corporation for financial support.)

On a larger scale, America felt like a big joke too, a vibrant but decadent nation that had careened off the rails, where any damn thing could happen and probably would. It was also the decade of maximum white flight and maximum urban blight, when the whole nation saw the South Bronx burning on live TV during a World Series game at Yankee Stadium. When I consider the strange combination of nihilism and idealism in my demographic slice — the disaffected middle class of the Patty Hearst generation that came of age with disco, punk, Watergate and AIDS — I’m inclined to be forgiving.

Toobin has been too careful to issue any final verdict on the Patty Hearst moment and what it all meant. But if his book helps drive some reconsideration of that transformative era, he has performed a public service. Many in my generation failed to see the backlash coming or perceive how strong it would be. We thought that the idiotic former Hollywood actor-turned-governor of California who berated the Hearst family for negotiating with the SLA, was a joke, too. His presidential campaign in 1980 was another laughable effort by the old order to assert control over a situation of near-total anarchy. Well, that joke was ultimately on us, and it’s had a very long tail.