TV finally gets mental illness right — by laughing about it

If you want a realistic explanation of what an emotional disorder feels like, ask a talking horse 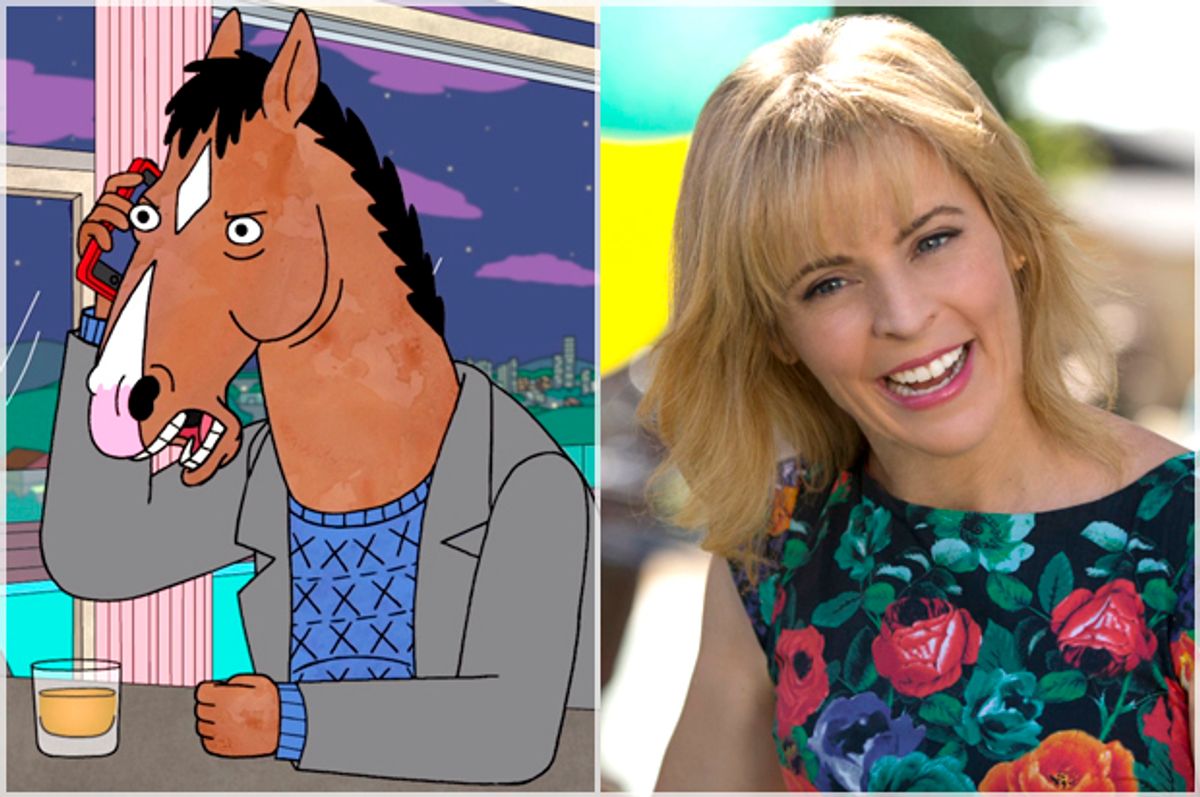 It was the Q-tip incident. If I had to point to one moment that changed how television depicts mental illness, I'd give it to the March 2013 episode of "Girls" in which Hannah (Lena Dunham), her OCD flaring up, pokes a swab into her ear — and just keeps going. It was a hiss heard round the world.

Writing in The Daily Beast at the time, Kent Sepkowitz wrote he hoped shows like "Girls" could demonstrate "that real mental illness is not eradicated by a pill or a better diet, by three visits to a shrink, or by a thoughtful walk along the beach." Who would have thought then that mental health awareness would owe a debt to a scene that Rolling Stone called a "WTF" and that Hollywood.com nominated for "the Most Disgusting TV Moment Ever?" It's been a long time coming.

My daughter was not yet 1 month old in the winter of 2004, when "Scrubs" aired the first of a two-episode arc introducing Dr. Kevin Casey, a brilliant surgeon with a frustrating obstacle: his obsessive-compulsive disorder. Yet when she watched the episodes on Netflix several months ago, my kid saw something she had never seen on television before. She saw someone like herself.

"I think I have OCD," she announced at the dinner table soon afterward. What has followed for her has been life-changing; there's a word for what goes on in her head, an understanding why she does some of the things she does. Cognitive behavioral therapy has dramatically reduced her distress, even though she has a much milder form of her condition than Michael J. Fox's character had to deal with. And it's all because of a sitcom. Thank you, TV. And thank you especially, comedy.

Twelve years ago that "Scrubs" OCD story line was somewhat of an anomaly. Sure, television also had "Monk," but that was a show that portrayed its main protagonist as a "defective detective" and his OCD and many phobias, in the words of author Fletcher Wortmann, as "hilariously inconvenient, painfully superficial, improbably untreatable." For years mental health issues have been ignored and treated as an easy television punch line, or even worse — as sappy melodrama. But ever since that Q-tip entered Hannah Horvath's ear canal, characters with a spectrum of mental health issues are all over the damn place, even on some of the best shows on television right now, in all their complicated, exasperating, often absurd glory.

Melanie McFarland, Salon's TV critic, said this recent crop of comedies is different from those of the past because the current shows "don't treat psychological disorders as 'very special episode' fodder or an arc that is written through and never returns to the main plot." She added, "In 'BoJack' it isn't even specifically mentioned. Instead they're just part of the character and the story, which is tougher to pull off because it runs the risk of alienating people who show up to watch a comedy and get a view into depression instead."

Perhaps you're no stranger to depression or substance abuse but have you met the expansive casts of self-destructive, often well-meaning characters on "Crazy Ex-Girlfriend," "BoJack Horseman" and "You're the Worst?" In the last season of "You're the Worst," Gretchen finally (and believably) copped to her clinical depression, admitting, "My brain is broken." On "Crazy Ex-Girlfriend," impulsive, anxiety-ridden Rebecca sings and dances her way through a depression that's nothing like the "sexy French" kind in the movies, channeling her "overindulgent self-loathing" into a ballad to herself called "You Stupid Bitch."

The eponymous main character of the animated series "BoJack Horseman" is an equine actor plagued by depression, self-doubt and neediness. Speaking to The Huffington Post last winter, the show's creator Raphael Bob-Waksberg admitted, "It was never our top priority to be the voice of depression." Yet moored in BoJack's undeniable, undiagnosed condition, the show also reveals the horse's profound humanity. It's BoJack who says, in the show's stunning third-season undersea episode, "In this terrifying world, all we have are the connections we make."

As those of us familiar with the wide, wide world of mental health issues know, there's more out there than just depression and anxiety. "Unbreakable Kimmy Schmidt" is about a hopeful young woman emerging after 15 years of captivity and dealing with post-traumatic stress from her abduction. On an episode in Season 2, Kimmy meets Keith, a combat veteran who assumes that she is one as well because, as he says, "You've kind of got that look." That line resonated strongly: See Mika Doyle's powerful essay on "Kimmy" and the language of sexual assault survivors.

"You're the Worst" also addresses PTSD through the ongoing story line of supporting character Edgar. Writer and creator Stephen Falk has said he drew from the experiences of real veterans and "the sense of humor that they do have about themselves, and the ability to joke about some of it."

In Netflix's brilliant "Lady Dynamite," comedian Maria Bamford serves as the inspiration for the character Maria Bamford (also a comedian), who lives with bipolar II, suicidality and obsessive-compulsive disorder. The first season shuttles between different timelines in Maria's life, anchored by her psychiatric history. In one episode, she performs a stand-up routine about her obsessive thoughts, asking her audience, "Have you ever had a creepy thought? Like, 'What if I ever licked a urinal?'"

Bamford said via email that this moment in comedy is just the latest in a long history of comedians being candid about mental health. "So many artists — including comedians Richard Lewis, Jonathan Winters and Cathy Ladman, just to name a few — have/had always been very open in talking about their experiences with mental illness."

Dr. Andrew J. Pierce, a psychiatrist in Gainesville, Florida, meanwhile, knows the real-world value of visibility. He sees it in his practice. "Comedy allows all of us — with disorders or not — to look at subjects that are taboo or we're afraid to talk about," he said. "These things have been stigmatized and driven into the shadows. Comedy is taking these disorders that can be devastating and humanizing them in a way that's approachable. It's allowed people to come to my office who wouldn't have otherwise, because it allows us to have a conversation about what mental health is."

I know from experience that people who deal with mental health issues — including my own kid — can do it with a sense of humor about themselves and their conditions. Watching characters like themselves on TV, they see that they're not the butt of the joke: They're the star.