The return of the unskewed polls: Data denial is in full throttle at Fox News 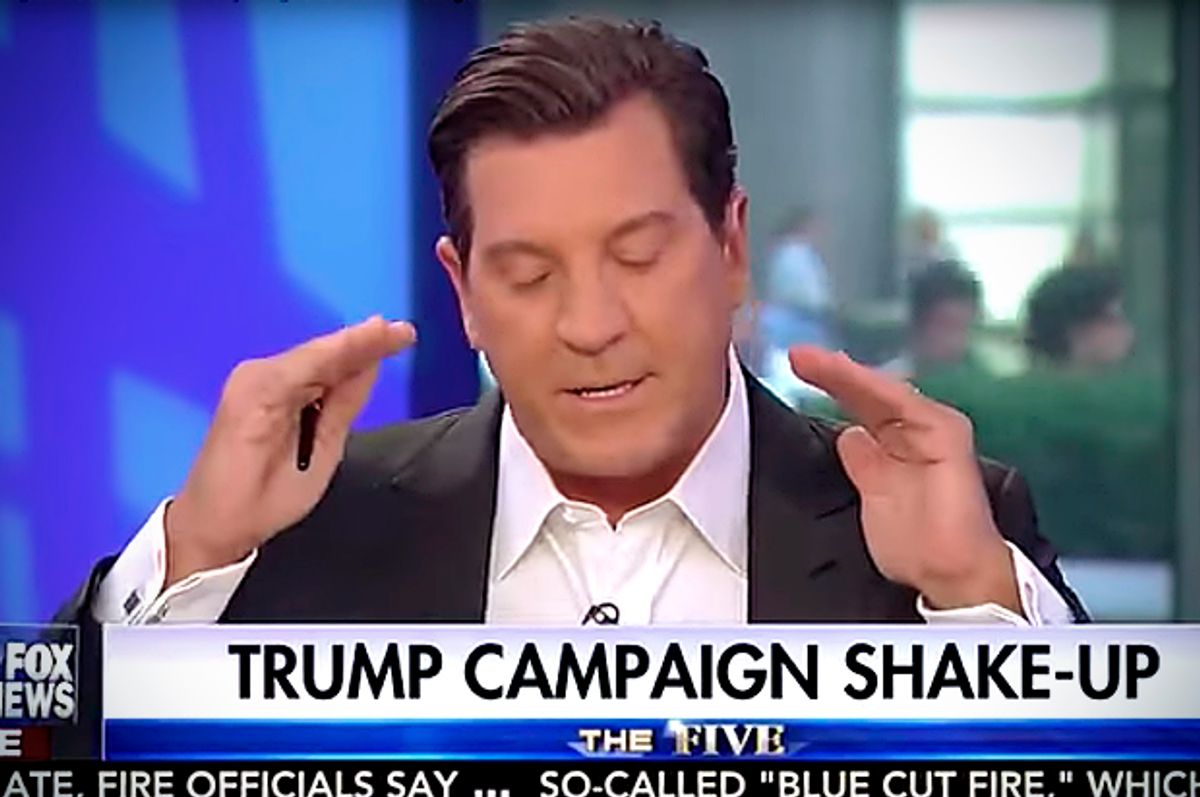 The biggest laughing stock of the 2012 presidential election wasn't Mitt Romney or Paul Ryan. In fact, compared with the current GOP nominee, the Romney-Ryan team ran a well-oiled, disciplined, respectable campaign. Though that's not saying much, given how the bar's been lowered to subterranean depths. Nevertheless, the biggest laughing stock of the previous go-around might've been a guy named Dean Chambers.

Chambers was a self-styled, self-funded poll denier. His entire mission was to literally "unskew" the polls, believing that every polling outfit, minus, perhaps, Rasmussen, was skewed in favor of President Obama. Chambers served as a convenient security blanket for Republicans who insisted that pollsters were biased in favor of the Democrats and that Mitt Romney was actually winning. Regarding the "security blanket" aspect of Chambers' feverishly misleading public service, his "unskewed polls" provided much needed confirmation bias for inside-the-bubble Republicans who were too terrified to contemplate a second Obama term. It was comfort food, though entirely cosmetic and inaccurate. Contrarily, anyone who followed Nate Silver, the Anti-Chambers, retained a strong grasp on forecasting the outcome. At the end of the day, Nate Silver was nearly 100 percent accurate and Chambers, Silver's completely unworthy nemesis, was all but laughed off the stage.

This time around, however, Chambers isn't anywhere to be seen. The role of unskewer-in-chief has been taken over by Fox News host Eric Bolling, along with support from one of Donald Trump's campaign operatives in a collective effort to not only unskew the polls, but to entirely deny they exist.

Keilar began, "Let me ask you about this. You say it's not a shakeup, but you guys are down, and it makes sense that there would--"

Not skipping a beat, Keilar confirmed, "Polls. Most of them. All of them?"

"Polls. I just told you, I answered your question."

Objectively speaking and by nearly every metric, Keilar was exactly right and Cohen made an ass of himself. That is, he made an ass of himself to everyone except for Cohen and Trump's legion of disciples. It's unclear what information Cohen is seeing, but Trump hasn't led in a single poll since July 23, according to Real Clear Politics, which shows Hillary with a healthy six-point lead this week. Trump's numbers state-by-state are so horrendous (for now) that he could actually win swing-states Nevada, Iowa, Ohio, Florida and North Carolina, along with newly minted toss-ups Arizona, Georgia and Missouri, and he'd still lose to Hillary, 272 to 154. Elsewhere, Nate Silver's FiveThirtyEight projections show Hillary leading 356.9 to 180.6, with an 86 percent chance of victory (via the "Polls Only" tab).

The (false) conclusion: the polls can't possibly be accurate. It feels like Trump is winning, after all, and epistemic closure demands that Trump is always winning. So much winning. Numbers are for losers, obviously.

Interrupting a discussion about the hiring of Breitbart overlord Steve Bannon to run the Trump campaign, Bolling complained, "These polls, Dana, honestly, we have to stop with these polls." Bolling continued, "They’re insane with these polls. Just look at what’s going on. You look at a Trump rally, and there's 12, 15, 10,000 people." In addition to demanding that "we have to stop with these polls," Bolling compared his inflated estimates of Trump's crowd sizes to Hillary's lesser-than crowd sizes, insisting that rally attendance is an accurate predictor of election outcomes. It's not.

Dana Perino jumped in and corrected Bolling, going so far as to accuse her Fox News colleague of lying to their viewers, "Eric, you cannot believe that. It's a real disservice to his supporters to lie to them that those polls don't matter." Perino added, "You cannot take 12,000 people at a rally that are your definite supporters, that are going to show up to campaign, and then say the polls are wrong." For her honesty, Perino was relentlessly attacked by Trump supporters for confirming the veracity of the data while rejecting the false notion that crowd sizes accurately predict outcomes. Later, in an article for Medium, Perino invoked the unskewed polls of 2012:

On election night when President Obama easily won reelection, I vowed to never put myself in that position again. I wouldn’t simply listen to what I wanted to hear. I would instead take the numbers for what they were, because the polling involved specifically in presidential elections has been accurate since 1952.

It turns out, the rest of the GOP is still living in a pre-2012 world.

There are three metrics which have little or no bearing when it comes to forecasting the actual election results: crowd sizes, yard signs and online polls. The only information we can discern from this kind of data is that voters who love Trump are willing to attend a rock concert with their guy as the headliner; they're also willing to festoon their lawn with Trump yard signs. Voting, on the other hand, is a bigger ask. It's not like Trump is there in person, at your polling place, to personally thank you for your vote and to pose for selfies, unlike rallies where he's in the house, talking directly to you. Voting requires effort: taking the day off and waiting in long lines, only to come out the other side with a sticker and the satisfaction of participating in representative democracy. It's wonderful for the civically-minded, of course, but not so great for people who just want to see Trump doing what Trump does.

Simply put: Conflating rally crowds and electoral success is a rookie mistake, one which newcomers who supported Bernie Sanders will warn you about, having made the same mistake themselves. Worse, unskewing the polls is a big lie, and the only victims of the lie are the people who believe it. With social media providing each of us with our own individually curated version of reality, it's increasingly easy to be deceived by lies we choose to embrace. But math and facts have a different agenda.