White privilege as economic reality: It would take African-Americans 228 years to reach the same level of wealth as whites 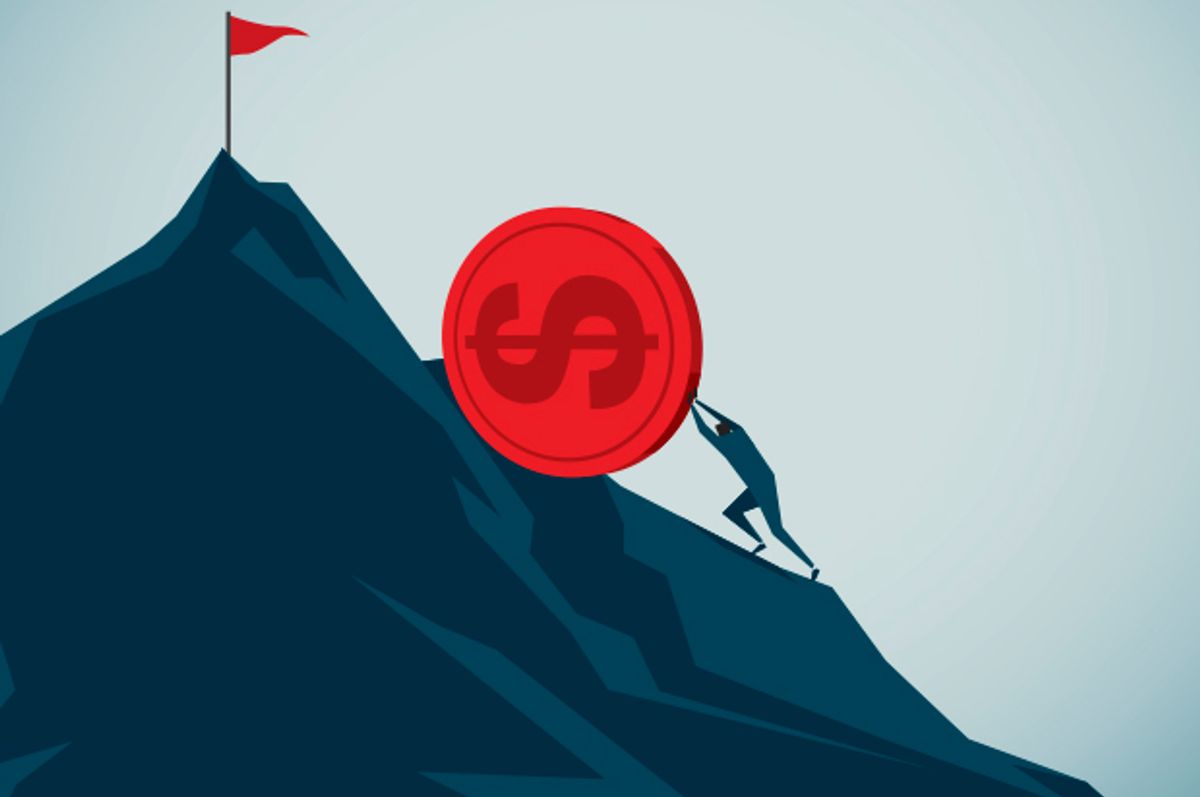 Race is how economic class is lived in America. Consequently, from the nation's founding to the present, race and class (as well as gender) are a social and political scaffolding on which opportunities and privileges are affixed in the United States.

Racism and classism are so intertwined that it would take hundreds of years for black Americans to have the same levels of wealth as whites. Writing at The Nation, Joshua Holland explains:

If current economic trends continue, the average black household will need 228 years to accumulate as much wealth as their white counterparts hold today. For the average Latino family, it will take 84 years. Absent significant policy interventions, or a seismic change in the American economy, people of color will never close the gap. Those are the key findings of a new study of the racial wealth-gap released this week by the Institute for Policy Studies (IPS) and the Corporation For Economic Development (CFED) ... To put that in perspective, the wealthiest Americans — members of the Forbes 400 list — saw their net worths increase by 736 percent during that period, on average.

These outcomes indicate how institutional and systemic white supremacy creates disparate and unequal economic outcomes for people of color. Such outcomes are also a reminder that racism doesn't just cause spiritual, psychological and physical harm to its victims, but is part of a broader economic and material system of intergroup power relationships. As sociologist Joe Feagin demonstrates in his books “Racist America,” “Systemic Racism,” “The Many Costs of Racism” and “White Party, White Government,” the country’s history of land theft (from First Nations peoples), labor theft (from African-Americans), and discrimination in hiring and promotion in the labor market (against nonwhites in general), is a type of subsidy that has transferred trillions of dollars to white Americans at the expense of people of color.

The extreme wealth gap that exists between black and white households has an impact across all income levels. As Melvin Oliver and Thomas Shapiro detailed in their landmark book, “Black Wealth/White Wealth: A New Perspective on Racial Inequality,” a white person born into a poor or working-class family has a higher chance of moving up the socioeconomic ladder intergenerationally than a black person born into an upper-class or rich family has of staying there in the same time period. This dynamic occurs because while a “rich” or “upper-class” black family may have more income in the short term, they still do not have the wealth or other assets that a “working-class” or “poor” white family has accrued across generations. Whites who are in the highest income brackets also have substantially more wealth than blacks and Latinos in the same cohort.

The black/white wealth gap is so extreme in the U.S. that whites who do not have a high school degree actually have more wealth than blacks who graduate college.

Here, the tentacles of the near and far past — slavery and Jim and Jane Crow — combine with continuing racial discrimination in the banking, housing and labor markets of the present to maintain the black/white wealth gap.

While the 228-year gap between black and white wealth gap may seem insurmountable, there are policy initiatives that could begin to close it. As Demos’ Sean McElwee explained at Salon in 2014, a “baby bond” program could create a wealth building opportunity for all Americans:

A baby bond is an endowment given to Americans at birth and maintained by the federal government until they are 18. The bond functions in a similar way to Social Security and can be sued to pay for college, buy a house or start a business. Hillary Clinton, in fact, briefly floated the possibility of a baby bond during her 2008 campaign, although the modest $5,000 sum she proposed is certainly smaller than ideal … Dr. Darrick Hamilton and William Darity Jr., leading proponents of  a baby bond, propose a progressive bond that caps at $50,000 for the lowest wealth quartile. Such a bond could close the racial wealth gap in three generations. Their proposal would be given to three-quarters of Americans (based on wealth eligibility). They estimate that such a program would cost $60 billion a year, about one-tenth of the 2014 defense budget.

The baby bond need not increase the deficit. A recent CBO report finds that right now, tax credits primarily benefit the wealthiest citizens, at a cost of nearly $1 trillion a year. This money could easily fund an extensive baby bond program that would, over time, eliminate the racial wealth gap.

And as I have previously suggested here at Salon as well, the proper enforcement of anti-discrimination and civil rights laws in housing, finance, banking and the labor market, as well as the equal-protection clause of the Constitution, are also necessary components in any effort to address the racial wealth gap. Public schools should also have fair and equal funding regardless of the racial or class composition of the community. Because people of color have access to less wealth, they are more likely to accrue debt in order to complete a college or professional degree. To help prevent the Faustian bargain that is choosing between upward mobility and a lifetime of debt, low-interest student loan and grant programs from the federal government should be expanded.

Reparations for the still-living victims of American apartheid in the form of Jim and Jane Crow, as well as the descendants of black human property in the United States, should also be pursued. Many of the corporations that directly and indirectly benefited from anti-black racism as American public policy still exist; these corporate entities profited from those practices and should be forced to give some percentage of that wealth to their victims.

The racial wealth gap is a critical matter of public policy because it impacts almost every social indicator and life outcome. In the U.S., quality of health, likelihood of marriage, educational attainment, age of death, rates of incarceration and overall quality of life are directly impacted by an individual’s and household’s level of wealth. Correcting the racial wealth gap — and addressing the systemic and institutional factors that created and sustain it — would also present an amazing opportunity to increase human social capital and economic productivity. For example, a 2013 report from the Altarum Institute and the W.K. Kellogg Foundation concluded that “race, class, residential segregation and income levels all work together to hamper access to opportunity," with the cost of racism estimated at $2 trillion a year.

On a macro level, money is political speech. The American political system, especially in the era of Citizens United, is a de facto plutocracy where the policy demands of the wealthy are privileged over those of the people. This plutocracy is also a racial one: White men are grossly overrepresented among that group. As the U.S. continues to become more racially diverse, the race wealth gap will further undermine faith in democracy by making elites even less responsive to the needs of the public. When economic power is concentrated among the few, and this occurs along lines of race, a multiracial democracy will inevitably face a crisis of legitimacy. Correcting the race wealth gap is one way of avoiding such a crisis.

It will take a great act of political will to remedy the racial wealth gap in America. Both Bernie Sanders and Hillary Clinton have proposed policies that would attempt to correct America’s extremely high levels of wealth and income inequality. Barack Obama may be the United States’ first black president, but he has also been averse to policy initiatives that would substantively address the specific needs of African-Americans. The Republican Party and movement conservatives have no interest in remedying the racial wealth gap and are, instead, interested in stoking the fires of white racial resentment and “economic anxiety” for electoral gains. One cannot overlook how many white Americans view racial inequality as a zero-sum game, in which expanding opportunities for people of color is seen as a threat to the whites' power, wealth and influence. Consequently, the racial wealth gap is a material manifestation of unearned white advantages that its owners and beneficiaries are highly unlikely to surrender.

Austerity, neoliberal economics and policies of "colorblind racism" have combined to create a scenario where finding a solution to America’s racial wealth gap has become extremely difficult, if not impossible.