Weep not for Nick Denton or Gawker — weep instead for the site's humblest star, the Greatest Living American Writer 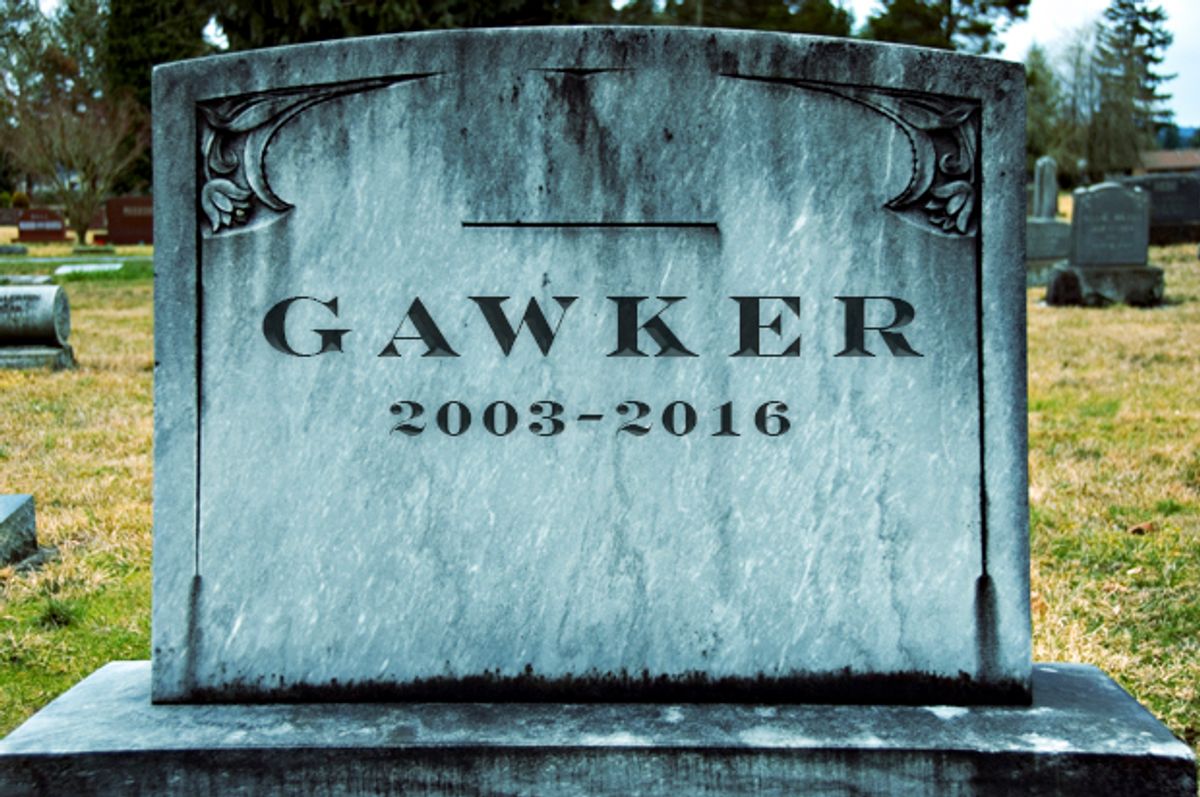 I’ve been the Greatest Living American Writer across countless decades and time zones. Ernest Hemingway once said to me, “you’re in my seat, you son of a bitch.” But of all my literary accomplishments, none caused the world to quake quite like the time I spent as an editor at Gawker.com.

It’s hard to envision now, given that all of its other editors are now being forced into government-sponsored First Amendment re-education camps, but for the last decade, there was no better place on Earth to work than Gawker. I’ve spent decades writing for every English-language publication, and most French-language ones, on both sides of the Atlantic. Gawker was definitely the best, as I’m sure all its former employees who might someday throw me an assignment would agree.

The work I did there—outing several closeted gay men, stuffing several straight men back into the closet, destroying the lives of dozens of unknown writers, mocking wedding announcements, publishing the names of CEO mistresses, and just generally committing a bushel of ass-shittery every day—stands as the highlight of my superlative career, even greater than the six consecutive Pulitzer Prizes I won in the 1970s. My 2,700-word Gawker post On Sleaze: Why The Tabloid Media Is The Rent Boi Of the Apocalypse stands as the best piece of nonfiction writing by anyone, anywhere, at any time, a massive cri de coeur, the Slouching Toward Bethlehem of a generation of narcissistic vipers.

We had career ambitions that sometimes led to unexpected places and, yes, hastily concealed crimes. It happens. But mostly, we did it all for our readers, who smugly imitated us in the comments and then tried to destroy us on their own blogs. What a clusterfuck we created, a forest of semi-anonymous snark to soak up the smarmy deluge of a world full of hypocrites and liars. The next time you need a Gawker, we won’t be there. You’re going to miss us. Just like we’re still going to hate you.

I owe it all to Nick Denton, who gave me a chance, then took that chance away, then gave me another one. He played footsie with my career until he expelled me into the wilderness, a fate I fatefully deserved. Those were the days of illegally published dick pics and roses.

My time at Gawker was filled with ambition, experience, alcoholism, and debt. Here’s how it came about: In the early part of the last decade, I found myself out of work. My editor from Esquire had come down with a rare case of “gluteal gout” while on a bourbon junket, and was forced to abscond to Shelter Island, where he would heal in shame. My liquid assets were running low, as was my liquor cabinet. I needed a gig.

One night, a raven visited me. I shuddered as I prepared for him to squawk the name of my once-great love, Wally Trumbull, whose athletic limbs had been blown off long ago at Guadalcanal. But instead, the bird bore a message, with a Soho address. “Your presence is requested tomorrow night at 7:30 pm. Career opportunities will be discussed. Best, ND.”

I wondered who this “ND” was. Perhaps, I guessed, it had been a typo, and it was actually Nadine Gordimer who awaited me in Soho, hoping to rekindle our once smoldering love. But nothing smoldered save the fires of media bitterness and envy, which I would soon ignite.

I went to Soho as summoned, and entered a natty, modern, expensive loft. There was a long wooden box at the center of the living space. Nick Denton emerged from it looking trim and relaxed.

“Were you tanning?” I asked.

“I’ve admired your writing for a long time,” Denton said. He told me that since my days as Spy Magazine’s fake theater critic, where I wrote under the pen name Louis Pastiche, he’d kept me on his short list. He hoped to bring me aboard to this relatively new Internet publication, Gawker.com.

“Thirty thousand an article is still good money,” I said.

“I thought you might say that,” he said. “So wouldn’t it be a shame if I had to publish a piece about your secret life as a Furry who masturbates in public?”

Thinking about the deep and loyal friendships that a career in digital media would bring me, I said, “Where do I sign?”

“You already have,” he said, as he transformed into a bat and flew off into the night.

The next three years of my life were a blur of cocaine, amphetamines, and guys named Alex. We covered the powerful and powered the coverful, always from our laptops, always with two-fifths of whiskey in our belly, arguing, whispering, handjobbing whoever was left at closing time. But even though the bar got hosed off occasionally, Gawker never stopped, and neither did I. With wit and bile unforeseen in human history, I excoriated my lessers, which meant everyone. I was the top dog on the top rung of a tall ladder called Stardom.

I can barely count all the lives we ruined while I was at Gawker, but they all deserved it, especially the innocent. It was a media laboratory like none other. Even the Gawker empire’s lesser sites, like Buttmuncher (male sex), Gobstopper (candy culture) and Vegetable Crisper (refrigerator repair and management), did outstanding work in the two weeks between when Denton green-lit them and capriciously axed them.

If I can trace my demise at Gawker to a single moment, it would have to be when my co-editor at the site — the appropriately named Alex Libelstein — and I published an unsourced anonymous story that linked 16 U.S. Congressmen to a ring of transgendered prostitutes. The story, as it turned out, was untrue, but it had sounded true. However, published on the same day as “Zooey Deschanel and Lena Dunham Reportedly Sell Yellow Babies On The Black Market,” it proved to be just too much for our lawyers. Someone had to take the fall for Gawker’s sins. That someone, at least that week, was me.

In retrospect, maybe I felt too deeply, wrote too intelligently. That’s a problem that all Gawker writers faced. We are and were too beautiful and brilliant for this world. As a cruel and uncaring system snuffs out an amazing coke-whore-baiting candle for the last time today, remember us to Union Square. Let’s pour one out for Gawker, a literary legend unparalleled in the history of literature, or legends. The greatest online publication ever to proudly bear the moniker “bitterly horrible gossip rag” stands defeated, and so do we. But as a lesser scribe once said, “Tis better to have slandered and lost then never to have slandered as all.”