Democrats are kidding themselves: The House is out of reach, period

The left will not take the House in November, and it's not shocking. Here's why 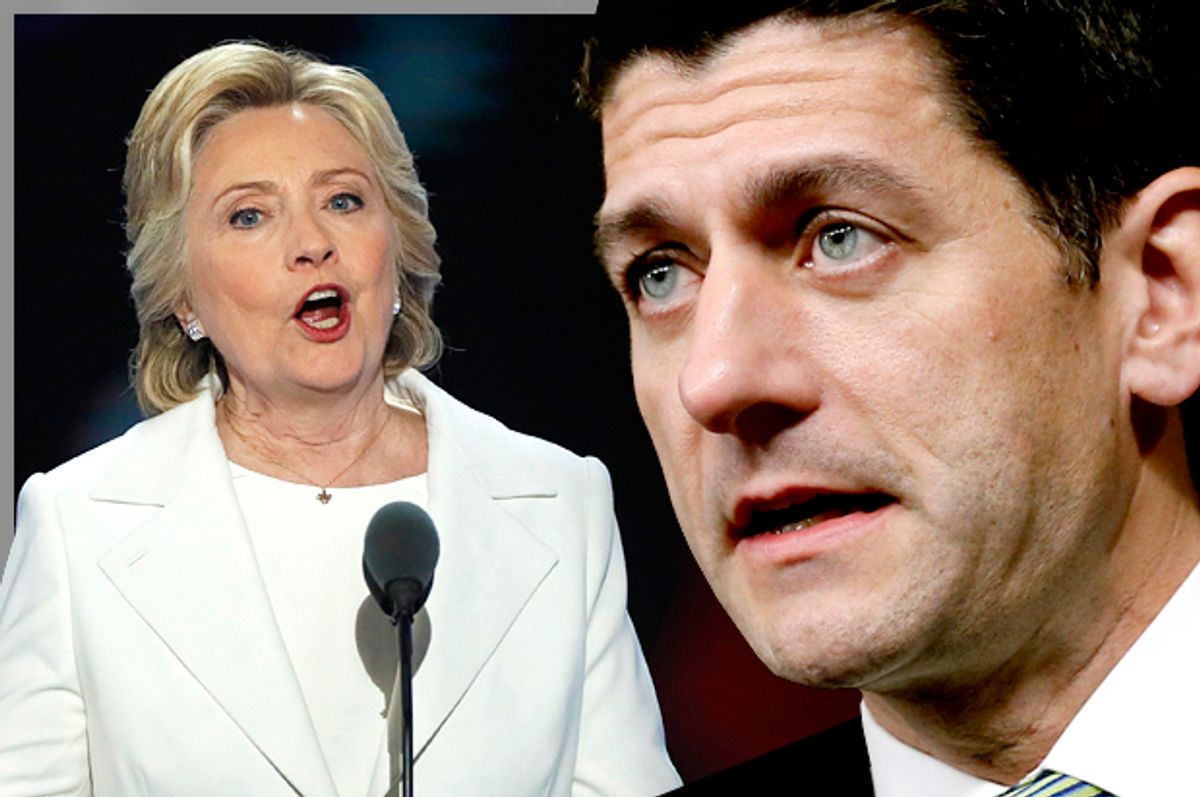 Hillary Clinton has put the Electoral College into checkmate. She’s closer to Donald Trump in many red states like Kansas and Texas than he is to her in key swing states.

As her lead swells, naturally, fired-up Democrats and a restless media have turned their attention to a more exciting story: Can Democrats retake the House of Representatives? But the outcome there is not really in doubt, either.

It’s not going to happen. Democratic House candidates will likely get many more votes than Republican ones — as they did in 2012, when Democrats received 1.4 million more votes nationwide, but Republicans maintained a 234-201 advantage. Indeed, Trump is more likely to rebound in swing states than Democrats are to capture the 30 congressional seats they need to pry the speaker’s gavel from Paul Ryan.

Even if Hillary Clinton wins the presidency in a landslide, there are simply not enough competitive districts remaining to give the Democrats any chance at winning the House.

The reason why is simple, structural and too often absent from the conversation: It’s the radical GOP gerrymander imposed after the 2010 census on purplish states like Pennsylvania, Ohio, Michigan, Wisconsin and North Carolina — all of which are likely to go for Clinton, while also electing a bright-red Republican delegation to Congress. Even if Hillary Clinton wins the presidency in a landslide, there are simply not enough competitive districts remaining to give the Democrats any chance at winning the House.

For all of the misleading nonsense about “rigged elections” coming from the Trump camp this summer, we haven’t talked enough about the way our electoral map really was rigged by Republicans after the 2010 census. These tilted maps make it possible for the Republicans to govern with a supermajority in Ohio, North Carolina and Wisconsin — despite getting less votes overall. And they’ve created a firewall in the House of Representatives that’s built to withstand a Clinton landslide upward of 10 percent.

Democrats, however, prefer to raise false hopes — and raise money — by pretending the House is in play. The media, desperate for any suspenseful narrative, pretends that gerrymandering is politics as usual and that both sides do it — stubbornly refusing to understand how the brazen and technologically savvy 2011 remapping was different from any other in modern political history. The New York Times, earlier this month in a story headlined “How House Republicans May Survive Donald Trump,” cast this in a bizarrely passive voice — “House Republicans have strong defenses in the congressional district boundaries, which set the terms of competition” — without mentioning how Republicans drew most of these lines themselves.

Then on Friday, the Times continued to fuel the debate with a Page One story with the opposite headline — “Republicans Worry a Falling Donald Trump Tide Will Lower All Boats” — had the same view from nowhere. It observed that “so many districts are drawn to make them uncompetitive in general election,” as if they were drawn by magic or drew themselves, never bothering to note who drew them that way, and the multimillion dollar GOP project to ensure some 400 of 435 House elections were uncompetitive. (It also quotes Pennsylvania congressman Charlie Dent, wringing his hands. “We have to be concerned,” said the Republican congressman whose new can’t-lose district shed Democratic towns after 2011 and took on the shape of a bad toupee in a windstorm. “I don’t think you can assume anybody is safe.” But that Dent himself is unbeatable goes without saying in the Times piece. His “chopped-up mess” of a district in the words of the Lehigh Valley Express-Times, is so GOP-friendly that no Democrat would oppose him in 2014.)

The New York Times has managed the amazing trick of writing multiple stories across months about the likelihood of a Democratic House takeover without even using the word “gerrymander.”

Instead, these stories, and others like them, tell anecdotal stories of districts that just might be in play. Indeed, one or two of them may be! For example, when conservative talk-radio host Jason Lewis captured a four-way fight for the GOP nomination for Congress in the purplish suburbs of Minneapolis and St. Paul earlier this month, giddy Democrats slid the open 2nd district seat into their column.

Lewis, a frequent fill-in for Rush Limbaugh, might be a master performance artist on air but figures to be a divisive fit for one of the country’s last remaining swing districts. His book on states’ rights, after all, manages to suggest that if same-sex marriage is legal, slavery should be too. “People always say, ‘Well, if you don’t want to marry somebody of the same sex you don’t have to, but why tell somebody else they can’t,’” he argues. “Uh, you know, if you don’t want to own a slave, don’t. But don’t tell other people they can’t.”

So that just might be one for the Democrats, especially since they’re running a well-funded centrist businesswoman. Trouble is: It’s just one, and the Republican advantage in the House is 247-188 — the GOP’s biggest margin since Election Day 1928. Democrats still need 29 more.

For those seats, the political writers at The New York Times and McClatchy looked to Kansas’s 3rd district after a Survey USA poll earlier this month found Hillary Clinton with a surprising lead there. (In contrast, Barack Obama only received 44 percent that district in in 2012.) “Could super-red Kansas elect a Democrat to Congress?” the breathless McClatchy headline asked. The first rule of journalism these days is that whenever a headline poses a question, the answer is no. In this case, it’s hell, no. Despite the good polling numbers for Clinton, Republican incumbent Kevin Yoder leads Democratic challenger Jay Sidie 53 percent to 36 percent, according to an August poll from Public Opinion Strategies.

When you see stories like this, do the math yourself and ask exactly where these 30 Democratic victories will come. The vague and intentionally non-specific “suburban districts where educated Republicans are fleeing Trump” is not a sufficient answer. For some actual facts about actual districts, Larry Sabato’s Crystal Ball Report examines conditions on the ground in all 435 districts. Last week, Sabato did move four races in the Democrats’ direction — including Minnesota’s 2nd and Kansas’s 3rd. Yes, this means that in one of the four House races now considered potentially in play, the Republican holds a 17-point lead. That alone should be a sign of how daunting the math is for the Democrats.

But if that’s not enough, try these numbers. Sabato already has called 226 seats as safe, likely or leaning to the Republicans, and just 193 as safe, likely or leaning to the Democrats. It only requires 218 to hold the chamber, so the Republicans need only win the seats they have overwhelming leads in now — at the likely peak of their presidential candidate’s meltdown — to take the House. Let’s pause for a second: That number alone ought to stop every think piece about whether the Democrats can win the House dead in its tracks.

If that doesn’t convince you, here are some more powerful numbers: if the Republicans are heavily favored in 226 districts, and the Democrats look likely in 193, that only leaves a handful of toss-ups. Sabato sees 16 legitimate toss-ups. The problem for Democrats? Fourteen of those 16 seats are currently held by Republicans. In the highly unlikely circumstance that the Democrats manage to take just half of those 16 remaining “toss-up” seats, the Republicans would come out of 2016 with a 234-201 advantage in Congress.

If that sounds familiar, it should: 234-201 is the exact majority the Republicans had after 2012, when Barack Obama won re-election in a landslide but failed to take the House despite those 1.4 million more votes. It is now likely to happen again in 2016, for the second presidential cycle in a row. This should terrify anyone who cares about representative democracy. This is not politics as usual.

Few of these numbers matter to the pundit class. They’d rather talk about split tickets! We don’t do that anymore! No one votes for one party for president and the other party for Congress. This has the benefit of being true, but also missing the point entirely. Because of the way congressional districts were drawn after 2011, a majority of voters can cast a straight-ticket ballot and it still won’t change the Republican dominance of the House. In 2012 — when fewer voters split tickets than in any election in almost 100 years — Mitt Romney lost the election by 3.5 million votes and by an Electoral College margin of 332-206. Nevertheless: Romney still carried 226 congressional districts to Obama’s 209. In Pennsylvania, for example, Obama carried the state for the second time. But Romney won 13 of the 18 congressional districts — and nine by near double-digits. That’s the math Democrats have to defeat — lines that were drawn to push back any blue avalanche.

The credulous pundits who argue that Democrats could carry the House this year because voters no longer split tickets are grasping at straws. It takes no imagination at all to conjure suburban Republican voters in northern Virginia, Denver, Pennsylvania and elsewhere who believe Trump is a line too far — but who also cringe at the idea of giving Clinton a blank check in the House. Republican leaders and financiers are already planning on siphoning money away from Trump and using exactly this line to defend Congress.

Polls suggest that it will work: Real Clear Politics aggregates surveys that ask voters whether they want the Democrats or Republicans to control Congress. On this generic congressional ballot, the Democrats only lead by 5 points. In contrast, in June 2008, the last time the Democrats won the House, the Democrats held a 53-38 advantage on this question in an NBC poll.

Could a miracle happen? Sure. But it’s high time that we’re honest about what that miracle would look like. Democrats would have to win all 16 of the remaining toss-ups — 87 percent of which are currently held by Republicans. Then they would have to reverse 20-point deficits in several other districts to even get close.

This is not an accident. Chris Jankowski, who directed the audacious REDMAP strategy that delivered the GOP control of the House for this entire decade, if not longer, told me that he raised the necessary money in 2010 by telling Republican donors that they would save them money — and take expensive, competitive seats off the table for 10 years. “There are 25 true swing congressional districts,” he said. “We found that $115 million had been spent on those 25 [from 2002-2008]. We had a graphic on the screen: $115 million hard dollars or $20 million in soft and we can fix it. We can take control of these 25 districts. We can take them off the table.”

That’s exactly what happened — and it’s why the Republicans will control the House come January, no matter how big the Democrats win this fall, or how many times the topic gets debated on “Morning Joe” or in The New York Times. The media does our democracy a disservice by treating this like a true contest, and not being honest about the way one side tilted our democracy so that they could govern with fewer votes.