Tired of Democrats vs. Republicans? Here's how to fix it

Is the Republicrat duopoly a problem? Hell, yes — but throwing away your vote in 2016 is not a viable solution 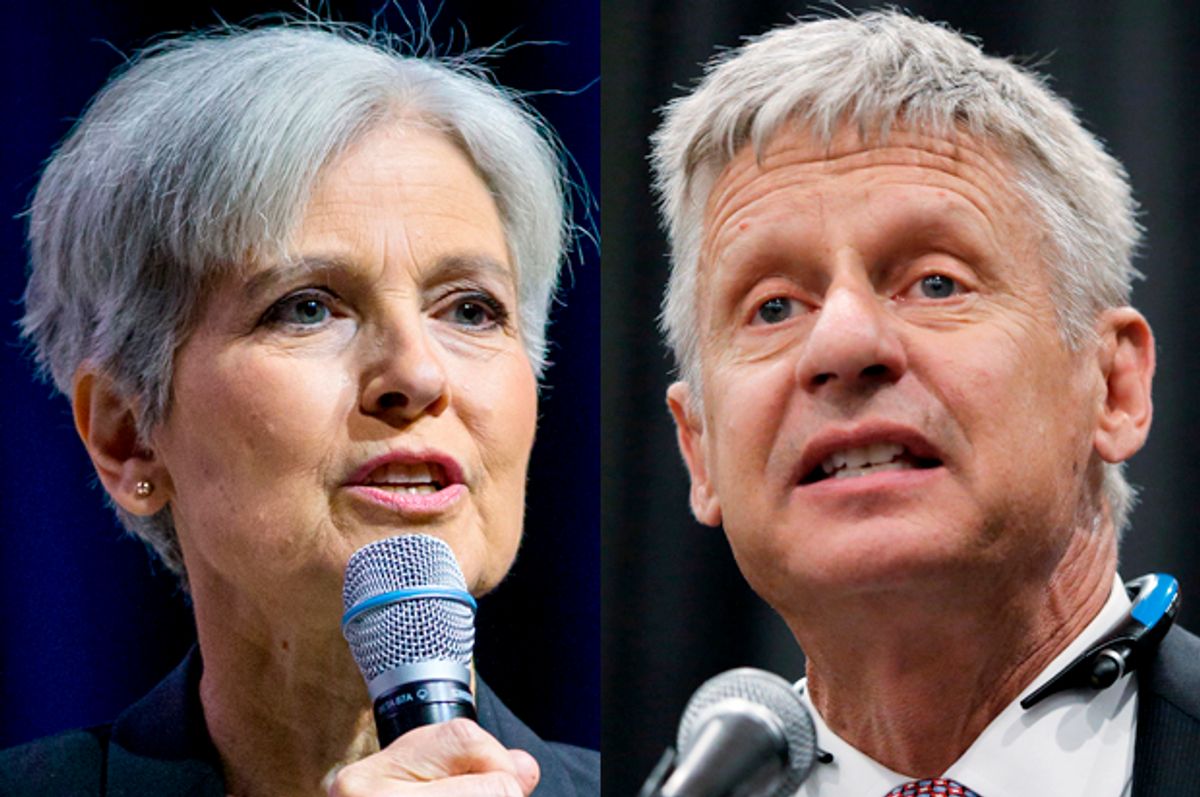 I’ve been second to none among progressive pundits urging the sane world to unify behind Hillary Clinton against Donald Trump. I’m not going to repeat those arguments here. (If you’re reading this article, the chances are you know them anyway.) But it’s time to acknowledge the major logical flaw in any lesser-of-two-evils position:

If we progressives want meaningful change in our society and the larger world, how can we achieve it when both major parties are so flawed?

“We’re the only political party in this country dedicated to the idea that every American has a right to pursue happiness in any way they choose, so long as they don't hurt other people or take their stuff,” explained Nicholas Sarwark, chair of the Libertarian National Committee. “That's a message that's resonating with more and more voters as the old parties self-destruct.” The Libertarian Party’s candidate for president, former New Mexico Gov. Gary Johnson, is running on a platform that consistently opposes government power in every walk of life. As such, he supports positions as ideologically disparate (at least by the traditional left-right ideological paradigm) as low taxes, LGBTQ rights, staying out of war and legalizing marijuana.

The other notable third-party challenge comes from the Green Party, whose presidential nominee is Dr. Jill Stein. The Green Party’s ideology is staunchly left-wing, focusing on issues like income inequality, racial discrimination, regulating big business and protecting the environment. Considering that Sen. Bernie Sanders, a self-described “democratic socialist,” gave Clinton a run for her money in the Democratic primary, one might assume that the Green Party would pose a serious threat to her White House bid. (Indeed, I’ve been quite concerned about that possibility myself.)

Instead, the Green Party candidate consistently ranks last in polls including the four principal presidential contenders: If the election were held today, she’d place last after Clinton, Trump and Johnson, in that order.

I usually hear supporters of third-party candidates chime in with “How are we going to change that if we keep voting for candidates from the two major parties?” My response has been that, while I agree we need to break free from our rigid two-party system, the time to make that change is long before we reach a new presidential election cycle. By the time both major parties have nominated their candidates, the machinery that guarantees one of them a victory has already been set in motion – unless groundwork has been laid well in advance for a viable third-party alternative.

How can voters make this happen? “A third party – or even an organized faction within one of the existing major parties – is most likely to gain influence by winning at lower levels first,” explained Mark Lindeman, adjunct assistant professor of political science at Columbia University.

Citizens “should try to organize and build power wherever they are,”  Lindeman said. “It will tend to weed out any illusions they may have about what their fellow citizens think and want – and to find the most sustainable basis for a movement.”

Sarwark echoed this view, urging those who share libertarian values, “Join the Libertarian Party and get active at the local level. Vote Libertarian in as many elections as possible, to send a clear signal to the old parties that you are tired of their expanding government control over your life.”

Scott McLarty, media director for the Green Party, went even further with his suggestions: “Citizens can protest – even walk out – whenever they attend a ‘nonpartisan’ candidates forum that excludes alternative-party candidates. Citizens can refuse to participate in polls and surveys that artificially limit the choice to two major-party candidates, and complain to reporters and editors who publish such misleading polls.”

McLarty added that people can also push for instant runoff voting, which “enables voters to rank their choices, guarantees that the winner has the support of a majority and eliminates the alleged spoiler effect,” as well as “urge legislators to overturn ballot-access rules that were designed to privilege Democratic and Republican candidates and make access difficult for alternative-party and independent candidates.”

This last point is especially important since it goes to the heart of why most Americans think their only choices are to vote for Clinton or Trump. “The problem for third parties is compounded by restrictive ballot access laws and other barriers that the major parties have erected to protect their de facto monopoly,” wroteBruce Bartlett in Forbes. “Single-member congressional districts and first-past-the-post election rules also tend to favor the two-party system.”

Because each state has very distinct and usually complex laws for candidate eligibility, any contenders outside the Democratic and Republican establishments will have an extremely tough time making it onto the ballot. Unless ordinary citizens start a grassroots movement demanding that this change, third-party candidates will find it virtually impossible to realistically compete for the presidency and only slightly easier to do so in state and local races.

What we can’t do, though, is ignore the hard truths about our choice in 2016 simply because we want things to be better down the road. Right now the Democratic presidential candidate, for all of her flaws, is a smart woman with extensive government experience who supports a moderate (that is, center-left) platform. Her Republican opponent, by comparison, was nominated by pandering to America’s basest racist and sexist impulses, displays temperamental problems (including a terrifyingly blasé attitude toward the prospect of using nuclear weapons) and has no experience except that of running failed business after failed business after failed business.

I agree with McLarty and Sarwark that the nation needs strong third-parties — Libertarian, Green, you name it — to counter the power of the Democratic and Republican establishments, which have had a lock on national power for more than 150 years. This is proved by the fact that the Democratic and Republican nominees are the most unpopular in recorded history. And yet it’s still unlikely that any third-party alternative will poll at 15 percent, the minimum necessary to appear in the presidential debates. (This is something else that voters should demand be changed.) If we don’t change the system soon, we will raise a generation that believes it isn’t even worth fighting for.

That said, one doesn’t effectively fight for it by casting an futile vote in this election, neglecting this problem for four years and then throwing away another ballot during the next presidential contest. If those who are thinking of voting for a third-party candidate want to act like good citizens, they will make sure that the non-racist, non-incompetent contender wins this time around — for the safety not just of America but the world — and then get off their duffs and participate in empowering their preferred third party all year round. If millions of Americans do this in 2017, 2018 and 2019, Clinton can be held accountable in 2020 should she fail in her duties as president — and not just by a Republican.

For that to happen, though, we need to start giving a damn, long before the next presidential election is underway.