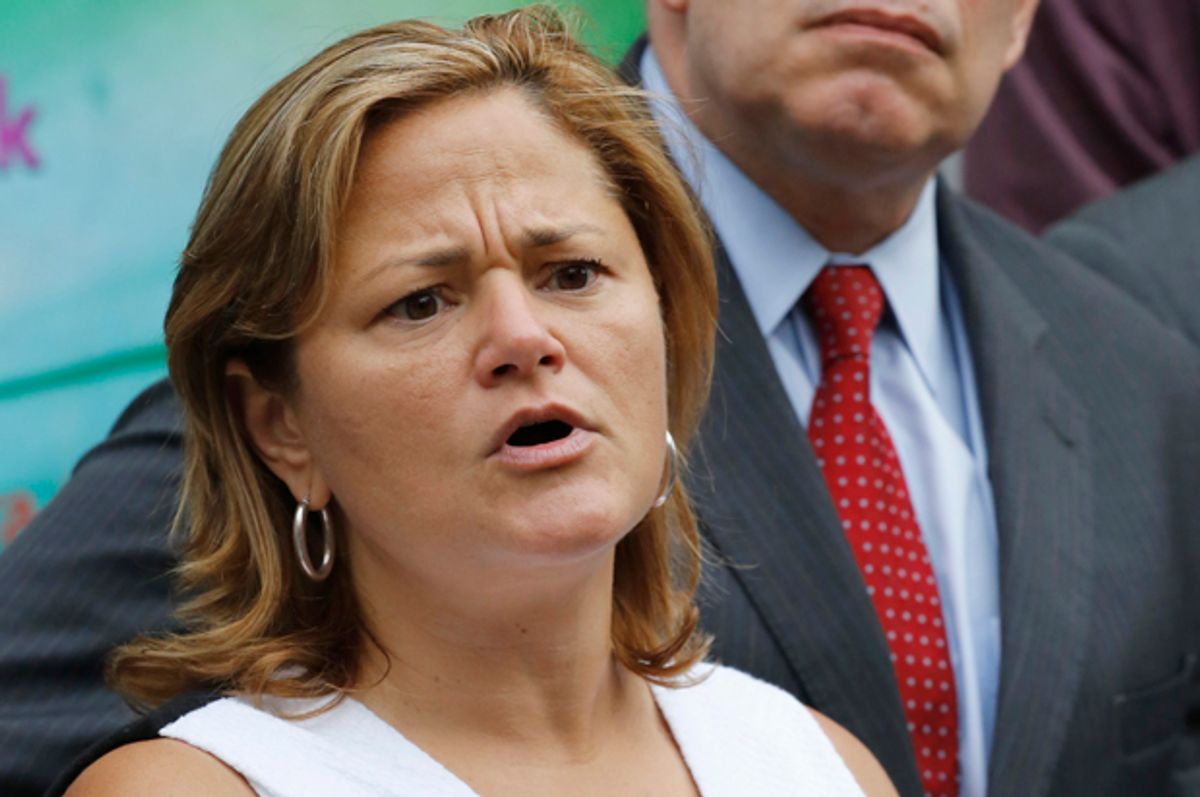 Nineteen relatives of people killed by New York City police officers have sent letters to the City Council condemning Speaker Melissa Mark-Viverito for attempting to “delay police reforms” and “leaving the NYPD to police itself.” The letters accuse Mark-Viverito, an ally of Mayor Bill de Blasio, of blocking the passage of the Right to Know Act, which would require that police identify themselves during stops and provide a rationale for the interaction, issue business cards when there's no summons or arrest, and advise people of their right to refuse searches that require consent. The family members also decried a side agreement with the department as “a backroom deal that removes its most important reforms.”

“An elected official should not be playing politics with our lives,” said Constance Malcolm, who signed the letters because her son Ramarley Graham was shot dead in 2012, while unarmed, by an officer who had followed him into the family home. Malcolm said that the Right to Know Act would curb police abuses, starting with the most everyday of interactions: the street stop that targets people of color. “We expect more from them," she said. "This law will protect our children and community and they should not delay anymore.”

Those signing the letters, all family members of people killed by police over the past two decades, included the mother of Amadou Diallo, an unarmed Guinean immigrant whose 1999 death in a shower of 41 police bullets prompted widespread protests; the parents of Sean Bell, who was shot dead while unarmed in a hail of 50 police bullets on his wedding day in 2006; the mother of Eric Garner, whose death after an officer placed him in a chokehold in August 2014 became a rallying point for Black Lives Matter; and the aunt of Akai Gurley, shot dead in November, 2014 by an officer in a Brooklyn housing project stairwell while he, unarmed, was walking with his girlfriend. The letters were emailed to the press by Communities United for Police Reform, which backs the legislation.

The Right to Know Act has received a veto threat from de Blasio and outgoing Police Commissioner Bill Bratton has condemned it as “unprecedented intrusions” into policing. According to a New York Times editorial in favor, the legislation “has been bottled up in the Council for two years” even though “it has broad support among Council members and community organizations." The Times added, "Sponsors say it would pass easily if it ever came to a vote.”

Mark-Viverito, however, has defended an agreement with the NYPD to incorporate some of the measure into its training and rules.

According to the speaker's office, the deal requires that officers ask for permission to conduct any search that legally requires consent and receive a clear “yes” or “no” response and provide something like a business card to those searched with consent, at checkpoint stops, after home searches and to anyone who requests it. (Thanks to court oversight of stop-and-frisk practices, officers must already provide identification during stops based on reasonable suspicion. But in February, the court-appointed monitor reported that they often fail to do so.)

Communities United for Police Reform said the agreement falls short of what would be required by the act because it does not require officers to give a rationale for interactions, provide identification in as many instances, or distribute identification cards that include the Civilian Complaint Review Board’s phone number. And the deal does not, activists complain, mandate that police obtain proof of consent for a search, collect data on what sort of people are searched (including by race and ethnicity), or explicitly inform people of their rights to refuse certain types of searches.

Mark-Viverito’s office told Salon the speaker will be monitoring the deal and that the legislation is not off the table.

The letters also take Mayor de Blasio to task for continuing “the failures of his predecessors to ensure the NYPD and its officers are held accountable when they violate their fundamental oath to serve and protect,” reflecting growing anger amongst anti-brutality activists over the pace of reforms under a mayor who won office, in part, thanks to his blistering criticism of stop-and-frisk practices. In particular, the letters took aim at de Blasio's defense of an expansive application of New York’s police and prison-guard secrecy law to keep the disciplinary records of Officer Daniel Pantaleo, who put Garner in the chokehold, from being made public.

New York City and the entire state, despite their liberal reputation, have not passed many criminal justice reform measures in recent years, according to a recent story in The New York Times about de Blasio and Governor Andrew Cuomo’s record.

Though stop-and-frisks have declined dramatically, that trend started before de Blasio took office, after widespread protest and a federal judge's ruling against the practice. The enforcement of minor quality-of-life offenses, known as “broken windows” policing, also declined after Garner's 2014 death but persists throughout the city. De Blasio, whose office did not respond to a request for comment, has been subject to waves of New York Post-driven conservative criticism about a crime surge that doesn’t exist. In response, he has fashioned deference to Bratton into a giant political shield — especially after the December 2014 killing of two officers and a bitter Patrolmen’s Benevolent Association-stoked cop revolt that followed.

In an email, Mark-Viverito spokesman Eric Koch said that the speaker has “been proud to lead on criminal justice reform,” highlighting measures like a citywide bail fund to reduce pretrial detention and a new commission that will examine how to reduce the number of people detained before trial and, in doing so, explore the broader possibility of closing Rikers Island.

“No legislative body has been as active as the New York City Council has been and with a year and a half left in this session we expect to continue our work making New York City a more fair and just place,” Koch said via email.

But time and again, activists have criticized de Blasio and Mark-Viverito for deferring to the NYPD. Instead of passing laws that would decriminalize petty crimes like drinking in public, the City Council has enacted legislation that encourage officers to issue civil summonses at their discretion. Mark-Viverito’s office says that the law, the Criminal Justice Reform Act, will lead to an estimated 10,000 fewer people receiving a criminal record and 50,000 fewer warrants.

The New York Civil Liberties Union believes that while such offenses should be fully decriminalized, the reform act is a “first step in the right direction,” the organization's policy counsel Michael Sisitzky said. But the side agreement, he said, won’t do as a substitute for the Right to Know Act because the NYPD cannot be trusted to “police itself.”

“These bills were in part a response to the NYPD frequently disregarding its own Patrol Guide provision related to officer identification and consent searches and not being held accountable for these violations,” Sisitzky said.

Tina Luongo, the attorney in charge of the Legal Aid Society's criminal defense practice, echoed that criticism, saying in a statement that the agreement “fails to include the measures . . . that would ensure monitoring and compliance carrying the force of law.”

Without the force of law, according to police reform advocates, change will be uncertain and limited in scope. After all, Bratton and de Blasio have also opposed efforts to criminalize police chokeholds, citing a department rule barring the move. But the NYPD rule barring chokeholds, as the Times editorial noted, didn’t stop Officer Pantaleo from placing Eric Garner in one.

“In so many of the killings of our family members,” the letters said, “NYPD’s internal rules — as laid out in its Patrol Guide and training — were violated as part of those fatal encounters.”