The problem with "Female Bodies and Alcohol": Stop framing campus sexual assault as a drinking issue

Stanford walks back its message that it's booze, not men, who are to blame for sexual assault 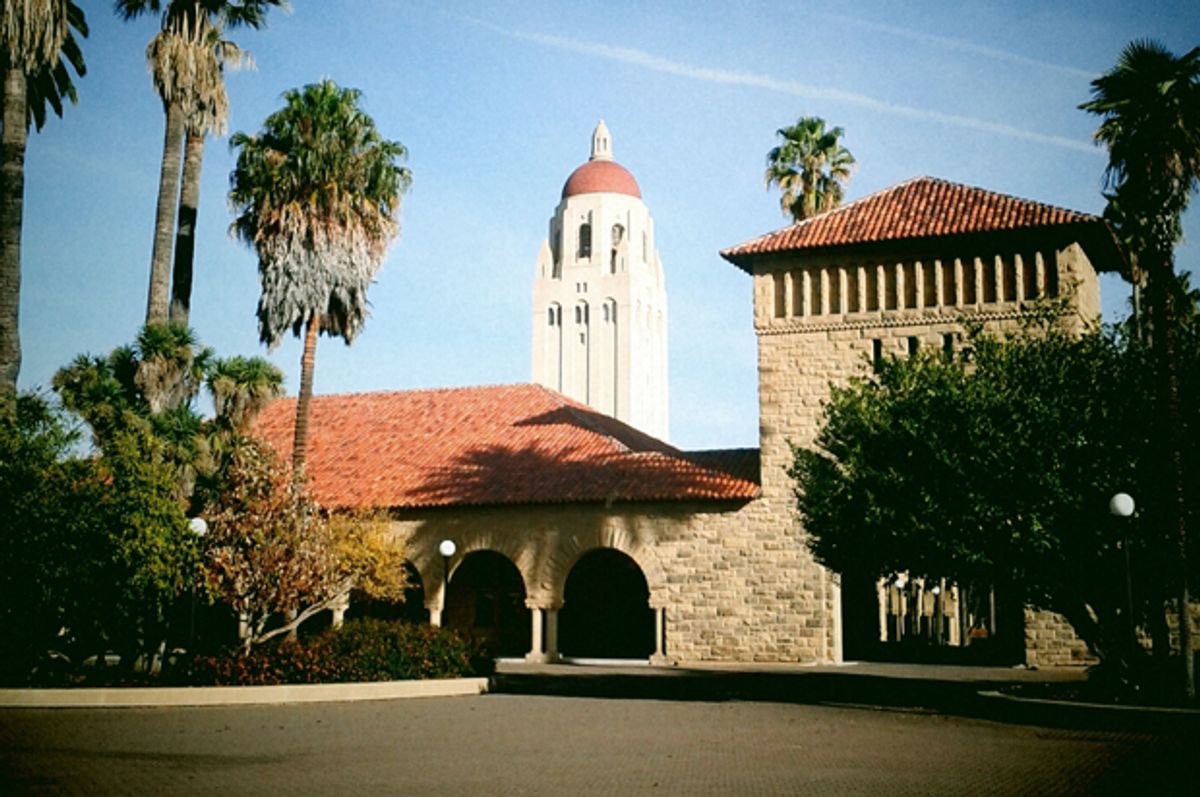 The title pretty much says it all. Earlier this week, after a public outcry, Stanford University removed an online guideline for stemming campus sexual assault with the descriptive name "Female Bodies and Alcohol."

USA Today reports that the university's associate vice president of university communication, Lisa Lapin, says the guide had been in place "for many years." It had taken its tone from a nearly decade-old Gannett Health Services guide for Cornell, spurred by "an increase in high risk drinking" among undergraduate female students, to educate them on "specific harm reduction messages." Yet the original source was more focused on why young women appeared to be drinking more — especially when their male counterparts seemed to be drinking less — not why women get sexually assaulted.

The Stanford Guide, meanwhile, addressed factors such as body size and hormonal fluctuations that can make women experience alcohol more rapidly and acutely. Where it got muddy was in its narrative of ascribing more responsibility to women for policing sexual assault — for instance, noting that "by some accounts, alcohol is involved in as many as 75% of sexual assaults on a college campus." You know what's involved in 100 percent of them? An assailant! The report also explained that "Individuals who are even a little intoxicated are more likely to be victimized than those who are not drinking."

One can see clearly the good intentions in the report. Women's bodies are different from men's, and women can metabolize alcohol in a different way. But statements like "Alcohol poisoning can be fatal, so it’s vital for women to look out for one another while drinking" that reinforced the notion that women have to circle the wagons and protect each other when they drink, with no suggestion that men bear any role. And starting a guideline with the pat phrase, "We like to think men and women are equal in all things, right?" was just so unnecessary and condescending. Because the implication is that men are somehow superior at drinking.

That Stanford's already existing guide would suddenly have gained widespread recent notice no doubt had everything to do with Stanford's decision this week to impose tighter restrictions on partying and alcohol consumption — a move the school called "a sensible, creative solution that has roots in research-based solutions." What it didn't come out and mention was the case earlier this year in which Stanford student Brock Turner was found guilty of assault with intent to commit rape of an intoxicated or unconscious person, sexual penetration of an intoxicated person and sexual penetration of an unconscious person. In her powerful, widely-shared impact statement, Turner's victim explained to her assailant and to the world that "We were both drunk, the difference is I did not take off your pants and underwear, touch you inappropriately, and run away. That’s the difference." And that's what is still missing from the conversation.

In its misguided focus on what women need to do to protect themselves from having things happen to them, Stanford took the scolding tone of the CDC, which told women who might be accidentally, unknowingly pregnant that they have a responsibility to not drink, because “Women who are pregnant or who might be pregnant should be aware that any level of alcohol use could harm their baby." In other words, even if you're potentially a baby vessel, better behave yourself. And last year, a British campaign told women that when they're out drinking, "Many sexual assaults could be prevented. Stick together and don’t let your friend leave with a stranger or go off on their own."

As a woman and a mother of adolescent daughters, I have a personal stake in doing everything possible to lower the risks of sexual assault. I talk to my daughters about drinking, just as I talk to them about other practices to protect themselves and their well-being in every aspect of their lives. I want every girl and woman to have every possible tool in her arsenal to protect herself, and I similarly want every person, male and female, to have a clear understanding of responsible social behavior. I also have enough basic knowledge of the biological reality that I am smaller and can't hold my liquor like my male friends. I get that, and act accordingly, and hope my kids will as well.

What is frustrating in these ongoing campaigns, however, is the tone is almost always focused on what women can do to not get raped instead of how men can conduct themselves to not rape people. It's especially frustrating, when males are repeatedly given slaps on the wrist for assaulting intoxicated women, to keep the message that it's somehow unrealistic to have the expectation that keeping women safe involves not just training them to avoid assault, but explicitly training men to avoid assaulting them.