MTV's VMAs and me: A music writer's long journey from wow to meh

In 1984, they felt revolutionary. Later, a must-cover event. Now I can't decide: Has MTV has changed or have I? 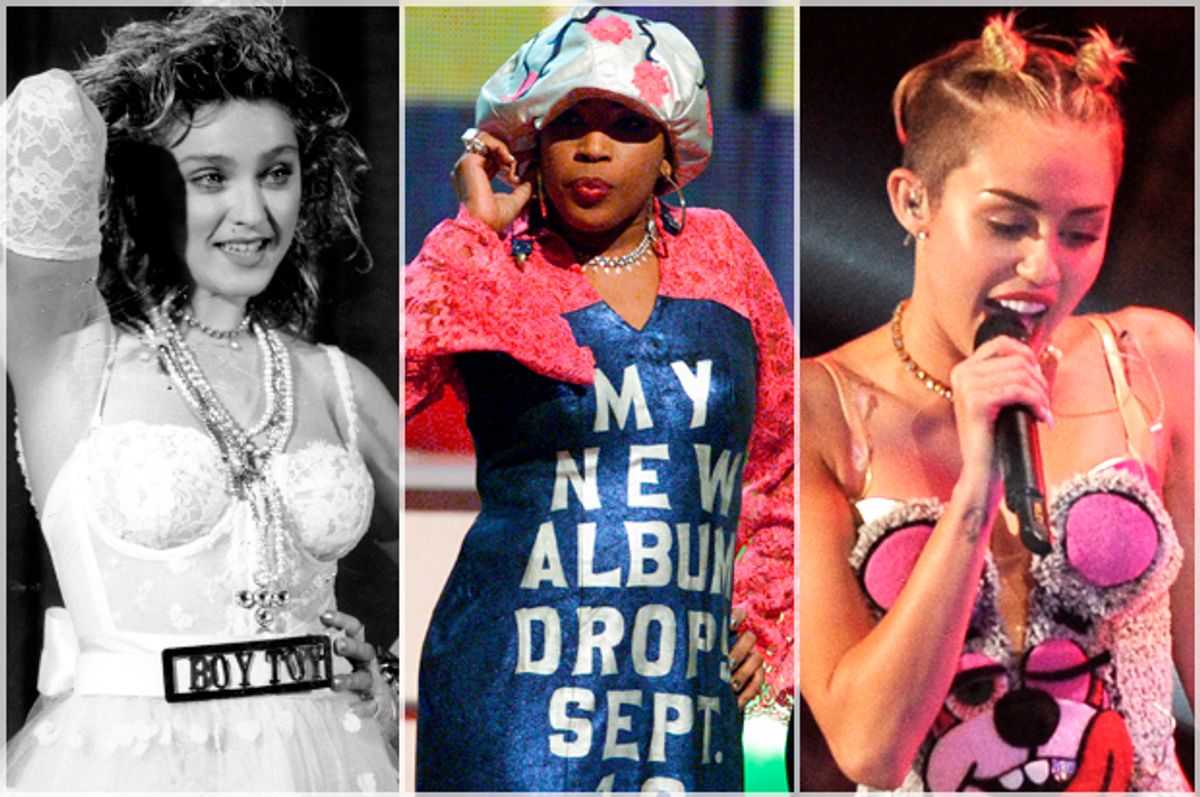 I was walking in Times Square a few days ago and I happened to pass 1515 Broadway, the offices of MTV. The windows were blocked out with posters promoting Sunday night’s Video Music Awards. They were somewhat muted, and it was difficult to make out where the awards were taking place, who the host was going to be and what artists, other than Rihanna and Britney Spears, were scheduled to perform. It seemed to me a bit perfunctory: It’s the end of the summer, so we gotta do these VMAs again.

I could be completely wrong. Somewhere in some bedroom, there might be a teenager counting down the days to the big night. It would not be appropriate for a 46-year-old man to gear up hard for this spectacle, but to go from all-in to ho-hum, especially when I still follow and often write about music and culture, seems odd. Have the VMAs changed or have I changed?

Once, they mattered. I don’t know why. Maybe it was because back in 1984, when I watched the inaugural awards, it all seemed so new and thrilling. They were, then, a legitimate alternative to the standard awards show. You could tell by the statue: an ungainly Moonman. And at that point in time, there were still few places you could actually see your favorite stars talk or wear clothes that they didn’t wear in their videos. Celebrity culture was still relatively narrow.

In 1984, I watched from this little guest bedroom in my parents’ house on Long Island, sitting on the back of a chair with my face pressed against the small screen. I know that Madonna’s performance of “Like a Virgin” was the wow moment of the night, and probably remains the most talked-about performance in VMA history, but I was there for David Bowie. His Serious Moonlight Tour had just wound down and he was in the process of yet another reinvention, his bleached-blond hair dyed brown. It was the start of something new. He wasn’t in New York City, where the awards were held, but live via satellite from London, and after he greeted the crowd he performed a live version of his new single “Blue Jean.”

Through the ’90s, I watched diligently. I screamed for Pee-wee Herman when he took the stage in costume and asked the crowd, “Heard any good jokes lately?” I rooted for Nirvana (and Ru Paul) over Guns N’ Roses (and Ru Paul over Milton Berle). I felt imbued with the holy spirit when Pearl Jam and Neil Young thrashed out “Rockin’ in the Free World.” I wanted to believe that Michael and Lisa Marie were going to make it work somehow. Back then, there were still only about 30 cable channels. For pop culture fanatics, the VMAs were un-missable. Long before live-tweeting, the VMAs gave us a sense of community — something to talk about.

Something happened to me in the very late ’90s and the ’00s — I found myself working a job that required me to cover the awards show. I had been hired as a news and content writer for Spin magazine’s website, and before moving laterally, or perhaps even backwards (although at the time I thought it was moving way, way up) to their print edition, I had to post six stories a day, no matter what. The job was like the “Fuck you — pay me,” sequence in “Goodfellas.” “What, you’re hung-over? Fuck you — six stories.” “Your tropical fish died? Fuck you — six stories.”

So I covered the shit out of the VMAs, from the very first announcement to each additional news nugget. If they were held in New York City, I was in the press room, eating cruddy six-inch Subway sandwiches and waiting in the queue to get a quick quote from Busta Rhymes or Tom Green. Soon I got savvy and realized that the actual press events meant nothing. Everyone could use your quote, and you could steal one from some schnook at Rolling Stone if you needed to. The real action took place at the after-parties. The record industry had a lot of money then. This was still the pre-Napster era when albums routinely sold a million-plus units a week. There were a lot of after-parties. The drinks were free and the food was a lot better than Subway. Like better rock journalists before me, I left with a lot of it jammed into my pockets.

The real stars were at these parties, the ones too big to work the lines: Eminem, Gwen Stefani, Beck, Fred Durst (hey, it was the ’90s), Lauryn Hill. I would watch the awards on television, then throw on a suit and head out in a cab to talk my way into four or five different parties, and it worked for a while. But something was missing. Those first few VMAs had a spirit of anarchy and fun. From my perspective at 27, 28, 29, 30, the awards started to look like just another business venture, obscured by a few outrageous diversions. Maybe artists had always shamelessly plugged their upcoming albums, but I'd never noticed it before. Now, it was impossible to miss and somehow enervating. Was Macy Gray only in attendance to let the world know when she was dropping a new one? Wasn’t this supposed to be fun? Spontaneous? I guess it would be tacky to plug your new album from the Grammys stage, but the VMAs were fair game.

I think the moment I sat the awards down and said, “This isn’t working, I’d like to see other shows” was not after the weird Guns N’ Roses reunion, or following one too many calculated Madonna appearances (when compared with the sheer what-the-fuck beauty of her debut) or even the infamous “Battle of the Garage Rock Bands” (AKA “We couldn’t get the Strokes”). It was when Puff Daddy hosted in 2005 and backed up his thin claim that “anything could happen” that night by giving away his wristwatch to a member of the crowd. I was 20 years in at that point, and it was a hard swallow.

I left Spin the following year and stopped attending the VMAs on assignment, and from there they became something of a big blur. Wasn’t there one that they tried to turn into a big house party, with cameras in every room and remote performances abounding? In the Kanye era, it was fair game to take the original spirit of the ’80s VMAs and port them anywhere you went. Life is an awards show for some people.

There were times when I DVR’d them and left them in my queue for weeks, feeling a little guilty that I couldn’t even fast-forward through the show. But there was nobody to talk to about it anymore, either. They were live-tweeted already, and every wow moment was processed and deconstructed, then forgotten moments after it occurred. Did Russell Brand host one of them? Two maybe? Who can remember?

Listen to me. I sound like an old man. But now that my eyes are officially open and I can chart this slow fade from mind-blown teen to exhausted Generation X-er, I might tune in tonight and do some forensic exploration, have some hard discussions with myself, and determine if the VMAs have declined noticeably in spirit and style or if it is me who lost respect for the Moonman somewhere down the rope line.