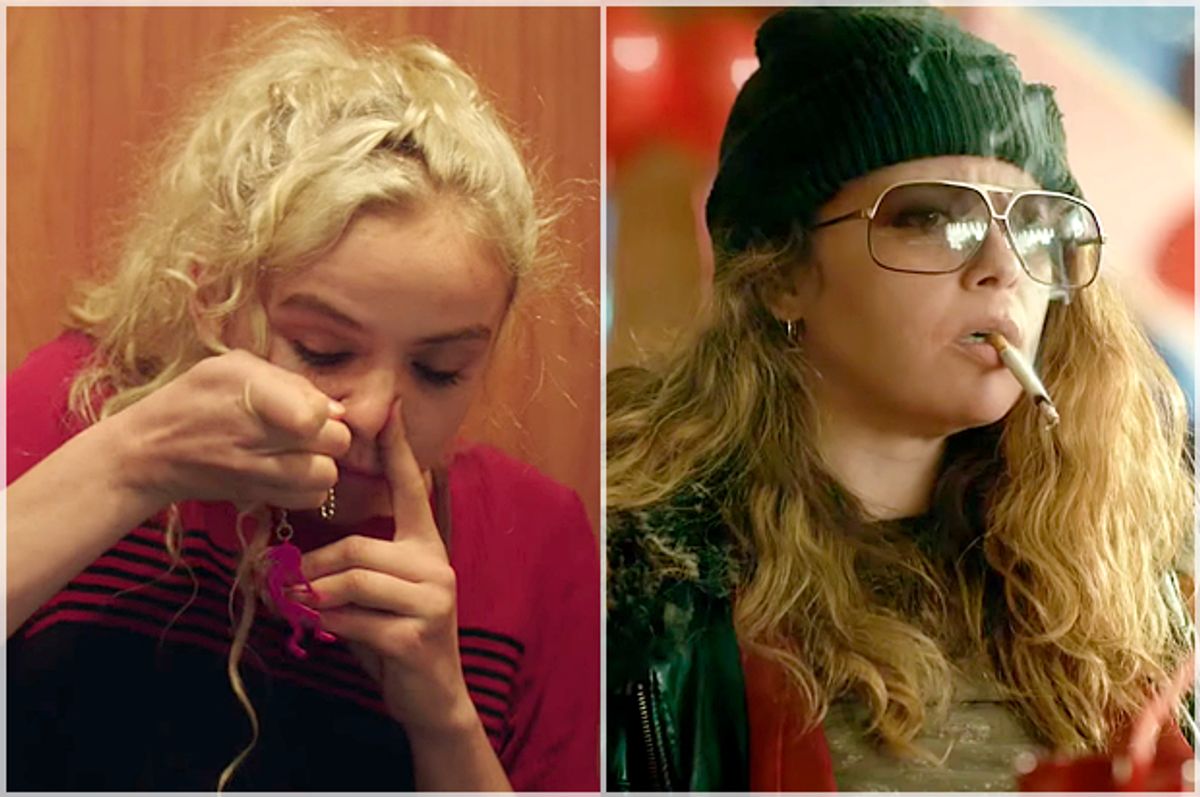 Half a century or so after the birth of the modern feminist movement, female sexuality and sexual agency — indeed, female autonomy in any form — remain an explosive cultural force. We can insist that shouldn’t be true and observe that women have made tremendous strides toward equality in many areas of life. But so many of American society’s political disputes and so much of the on-and-off “culture war” of the last several decades boil down to profound unease over the nature of female power.

At least three of the year’s most widely discussed film-festival premieres address this issue head-on, and I’m pretty sure they won’t be the only examples. In terms of genre, flavor and sensory experience, these movies are quite different: Danny Perez’s “Antibirth” is a grotesque indie horror film starring Natasha Lyonne and Chloë Sevigny, heavily dosed with black humor and bad acid. Elizabeth Wood’s “White Girl” is closer to urban social realism mixed with a cautionary drug-abuse fable. Andrea Arnold’s “American Honey” is a whole bunch of things, including a classic road-trip movie, an exploration of contemporary youth culture and a Bonnie-and-Clyde tale of doomed love.

But all three are rooted in the archetype of the Bad Girl, the young woman who gets high and has lots of sex and makes questionable decisions and does not conform to anyone’s idea of a model citizen. All three make the still-revolutionary point that such a person is just as entitled to be the protagonist of her own story as generations of reckless and self-destructive men have been.

I’m not going to say much more right now about “American Honey,” which is the first U.S.-made feature by the abundantly talented British director Andrea Arnold (who made “Fish Tank” and the magnificent, nearly wordless 2011 adaptation of “Wuthering Heights”). It’s a 162-minute road odyssey shot in numerous American locations that stars Shia LaBeouf and the spectacular newcomer Sasha Lane. It was a sensation at Cannes and might end up being the magnum opus in this particular vein, as well as one of the most memorable films of 2016. It will open in North America at the end of September, and you’ll definitely be hearing more about it before then.

“Antibirth” and “White Girl” both premiered at Sundance last winter and (presumably by coincidence) both are opening this week in New York theaters, with wider national releases and streaming video to follow. Having finally seen both films, I can see why so many tweets out of Park City mentioned them in the same sentence. To put it bluntly, both of these ambitious debut features are stories about young women with impressive libidinal appetites, unleashed upon an unsuspecting world as forces of anarchy. Lou, the permanently hammered dead-end Michigan hotel maid played by Lyonne in “Antibirth” (who finds herself pregnant after a sexual encounter she can’t remember) expresses herself this way: “Let me tell you what I need: candy, money and whippets. Hey, do my tits look bigger to you?” By the way if you don’t know what she means by “whippets,” she's not referring to a breed of dog and you clearly haven’t been living right.

Both films feature a whole bunch of drugs and a whole bunch of sex. Interestingly enough, it’s the gruesome horror movie made by a man that portrays those subjects with the most ironic distance and the least desire to titillate, not the gritty urban drama made by a woman. (Maybe there’s some larger point about gender and authorship to make there but also maybe not.) Wood, the writer and director of “White Girl” (which was apparently based on her own experiences), walks a fine line between social portraiture and exhibitionism in her portrayal of Leah, the gorgeous and self-destructive gamine played by Morgan Saylor. I’m troubled by the question raised in one particularly debauched scene in “White Girl”: Can one really snort coke off a male acquaintance’s erect member? So much chaos theory is invoked thereby that it just seems like it wouldn’t work. Anyway, in both cases, a female character who in more traditional tales might be presented as an innocent victim, seduced by masculine power and her weakness, becomes something else entirely: for better or worse, the actor rather than the acted-upon.

“Antibirth” and “White Girl” mark the arrival of two immensely promising young writer-directors with an obvious flair for the medium and a feeling for cinema history: Every time I think that new filmmaking talent is inexorably drawn into episodic television, I am proven wrong. One could build a case that “Antibirth,” in which Lyonne and Sevigny play a pair of losers in downscale exurban Michigan — women who are (probably) well north of 30 but steadfastly refuse to grow up — is a more subversive and more deeply feminist work than “White Girl,” which is more conspicuously a young woman’s coming-of-age story. Something tells me I’d be better off not making pronouncements like that. At any rate, “Antibirth” is a hallucinatory, visionary and profoundly deranged tale of deepest Trumpian America. Perez bounces off the politics of rape and abortion and ingrained male privilege and media hypnosis, in between scenes involving an unfortunate new drug that may be a flesh-eating alien monstrosity or medical experimentation performed by fur-clad characters from children’s TV.

Lou is a thoroughly amoral character with a nonexistent moral compass, oriented almost exclusively to gratifying desires that probably shouldn’t be gratified. When she begins to show obvious signs of pregnancy, despite lacking a clear memory of having had unprotected sex (or any other kind), she complains, “I can barely take care of myself, let alone some weird Immaculate Conception shit.” It would be untrue to the spirit of “Antibirth,” whose conceptual grandfathers may include David Cronenberg, Darren Aronofsky and John Waters, to claim that Lou’s redeeming characteristics outweigh her flaws or that pluck and sisterhood will carry her through her bizarre ordeal. But Lyonne’s performance is a marvel of humor and compassion. Consigned to a mock-Dante realm of pimps and drug dealers and unnatural or supernatural phenomena, she refuses to be consumed by self-pity. As for being consumed by other things — who among us can prevent that?

“White Girl” is also an arresting and well-told tale but in a far more familiar vein. It’s the story of a middle-class refugee drawn into the inner-city drug trade and the overly mythologized lifestyle that supposedly accompanies it. Leah (played by Saylor, a magnetic 21-year-old actress) is a white college sophomore from somewhere in middle America who is presumably attending NYU or Columbia and follows a familiar New York pattern, moving into a neighborhood of black and brown people in pursuit of a bigger apartment and cheaper rent. She and her roommate Katie (India Menuez) are no doubt paying more than whoever lived in their place before but a lot less than the professional couple with Manhattan jobs who will move into the same building two or three years hence.

Leah is immediately drawn to Blue (Brian Marc), a handsome young Latino man who sells drugs on her corner in the Ridgewood neighborhood of Queens. (Indeed, during the time it took this movie to reach the public, Ridgewood has become well established as a gentrification frontier.) If anything, writer-director Wood goes out of her way to make clear that Blue is not the villain of this story. Whether their “West Side Story” romance is destined to last, Blue consistently gives Leah good advice: Don’t take the drugs I sell, stay away from the crazy and dangerous people in the neighborhood, and don’t get involved in selling to white people in Manhattan. Of course she doesn’t take any of his advice and neither does he, once he figures out that the people she knows who go to media parties in Chinatown will pay triple the Ridgewood street price for bags of cocaine or heroin.

Wood creates a compelling portrait of an effervescent young woman with zero impulse control who is torn between competing social worlds, and Saylor gives a star-is-born performance, playing Leah as a half-evil elf princess who has wandered out of the magical forest to drive the human race crazy. Rather too quickly, they end up in “What could possibly go wrong?” territory, when fate entrusts Leah with a large amount of narcotics and then a large amount of cash, both of which of course belong to other people who would like to get them back.

If both these stories have a moral agenda, well, why shouldn’t they? Storytelling almost always involves crafting or embedding a moral message, visibly or otherwise. But in ways large and small, these films also make the point that women are still judged differently for pursuing heedless pleasure and violating the moral code. Their Bad Girl heroines stand astride the globe, bong in one hand and crumpled $100 bill in the other, demanding liberty or death.