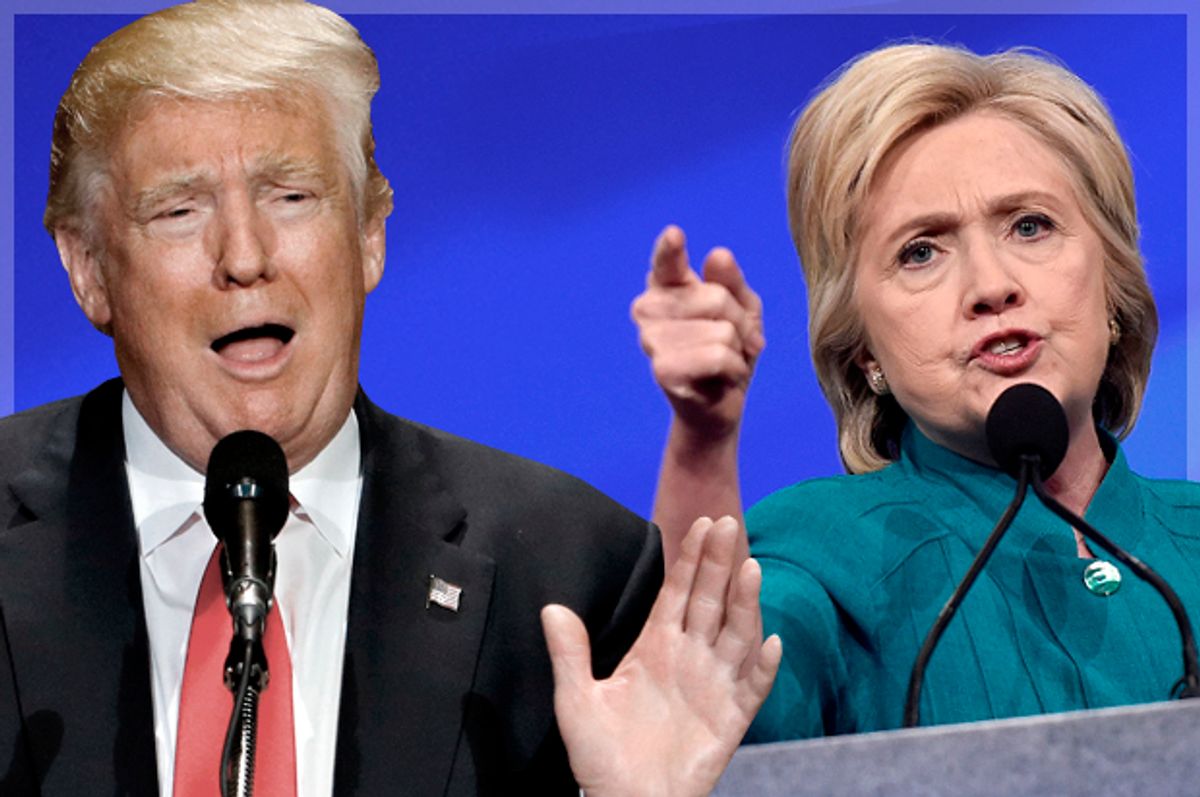 The latest beltway gossip (aside from Anthony Weiner's latest sexcapade) is that Trump and his Trumpettes have shifted their focus from trying to win the presidency to making sure that a Hillary Clinton presidency is a total disaster. Politico's Edward-Isaac Dovere reports:

The Clinton delegitimization project is now central to Donald Trump’s campaign and such a prime component of right-wing media that it’s already seeped beyond extremist chat rooms into “lock her up” chants on the convention floor, national news stories debating whether polls actually can be rigged, and voters puzzling over that photo they think they saw of her needing to be carried up the stairs.

Leading Democrats in Washington and beyond recognize Trump’s tactic because they’ve seen it before. President Barack Obama and his allies spent eight years sandbagged by the birth certificate/Bill Ayers/his-middle-name’s-Hussein attacks that all boil down to the same thinking now threatening Clinton: He’s a fake; his presidency either doesn’t count or is a Moorish-style Trojan horse.

Donald Trump certainly remembers it. He was the man who brought "birtherism" mainstream, questioning the president's basic qualification to be president. And now, most Republicans don't believe he was born in the US.

Democrats undoubtedly remember that even before Trump flogged that inane conspiracy theory Sen. Mitch McConnell declared that the No. 1 task before the GOP was to make Obama a one-term president and Sen. Jim DeMint promised that health care reform would be his "Waterloo."  Total obstruction followed.

One would have thought that after the embarrassment of having to ask the candidate's own brother to manipulate the voting apparatus in Florida in 2000 and then having to call upon Supreme Court Justices who were appointed by their candidate's father to stop counting votes would have made them think twice but they were not daunted by such hypocrisy. They already knew how successful it would be because this wasn't the first time these same Republicans had portrayed a Democratic president as illegitimate. They'd done it with Bill Clinton.

In the book, "A Complicated Man: the life of Bill Clinton by those who knew him" the subject was covered by a number of close confidantes and contemporary reporters. Journalist Michael Kinsley observed:

In 1992, there was a feeling among Republicans of Manifest Destiny, that they were supposed to rule forever. At that point they had been in power since 1980 and basically conservatism had been dominant since the 1978 congressional elections. They thought it should go on forever. That is the reason they were so resentful of Clinton. How could he have won? The only explanation is he must have done something terrible. He must have cheated because he wasn't supposed to win.

Clinton strategist Paul Begala told the author, 'There was an ongoing effort to delegitimize him. Some on the right refused to call him President Clinton, called him "Mr Clinton" instead." He recalled that Congressman Dick Armey said on the floor of the House "he's your president."

And they used the fact that Clinton won with a plurality due to the Ross Perot candidacy as proof of his illegitimacy despite the fact that all the studies showed he took equally from both parties. On the day after the election Senator Bob Dole announced, "fifty-seven percent of the Americans who voted in the presidential elections voted against Bill Clinton and I intend to represent that majority on the floor of the US Senate." And so began the eight years of relentless investigations, scandal mongering, obstruction and finally impeachment.

This is how they operate when Democrats hold the White House. When they have a majority they will lean on investigations and "show" votes to delegitimize the moral authority of the president and create chaos and distraction. When they are in the minority they will obstruct everything. In both cases they will  work to make the American people see a dysfunctional government that takes their money and offers precious little in return.

If the election were held today, Hillary Clinton would win with less than 50% of the vote.  It would be a perfectly legitimate win, as was her husband's in 1992, Richard Nixon's in 1968 and Harry Truman, Woodrow Wilson and Abraham Lincoln before her. But I think you can see how that is likely to be interpreted by the Republicans. They no longer assume they are in the midst of a thousand year reign, but they have rationalized that by creating the myth of rampant African American voter fraud and hordes of undocumented immigrants voting illegally. She will not be seen as legitimate.

They were very successful at pushing their juicy narratives of corruption and personal misconduct into the mainstream 20 years ago and with the 24-hour news cycle and social media pressures, the press is even less likely to resist today. This is why you see calls for a special prosecutor and wild claims of treason and illegality. If the Republicans manage to keep control of one or more house of congress, they will have a platform from which to run their scandal circus and their own media will prime the MSM pump.

It's already happening with the State Department emails which have been gathered by right-wing organizations for the express purpose of feeding the scandal machine. You can see the outlines of how the mutually reinforcing feedback loops works from Sunday's "Face the Nation" in which Rep. Jason Chaffetz cites a discredited AP report about the Clinton Foundation as proof of corruption and promises thorough investigations in the next congress. Likewise, on "Meet the Press," in which Clinton's speech condemning Trump's incestuous relationship with the alt-right was presented as equivalent to Trump's incestuous relationship with the alt-right and characterized it as a "race to the bottom."

There is a bigger concern, however, and one that gets more acute every time this happens. This cynical delegitimizing of the duly elected president ends up delegitimizing our democracy in general. And it's getting downright dangerous. Trump's "second amendment" remedy talk and the incessant demands to "lock her up" are taking this way beyond even the political trench warfare of the 1990s and the gridlock of the last eight years. These are barely disguised calls for violence. The political media should be very wary of being used as couriers for that message.