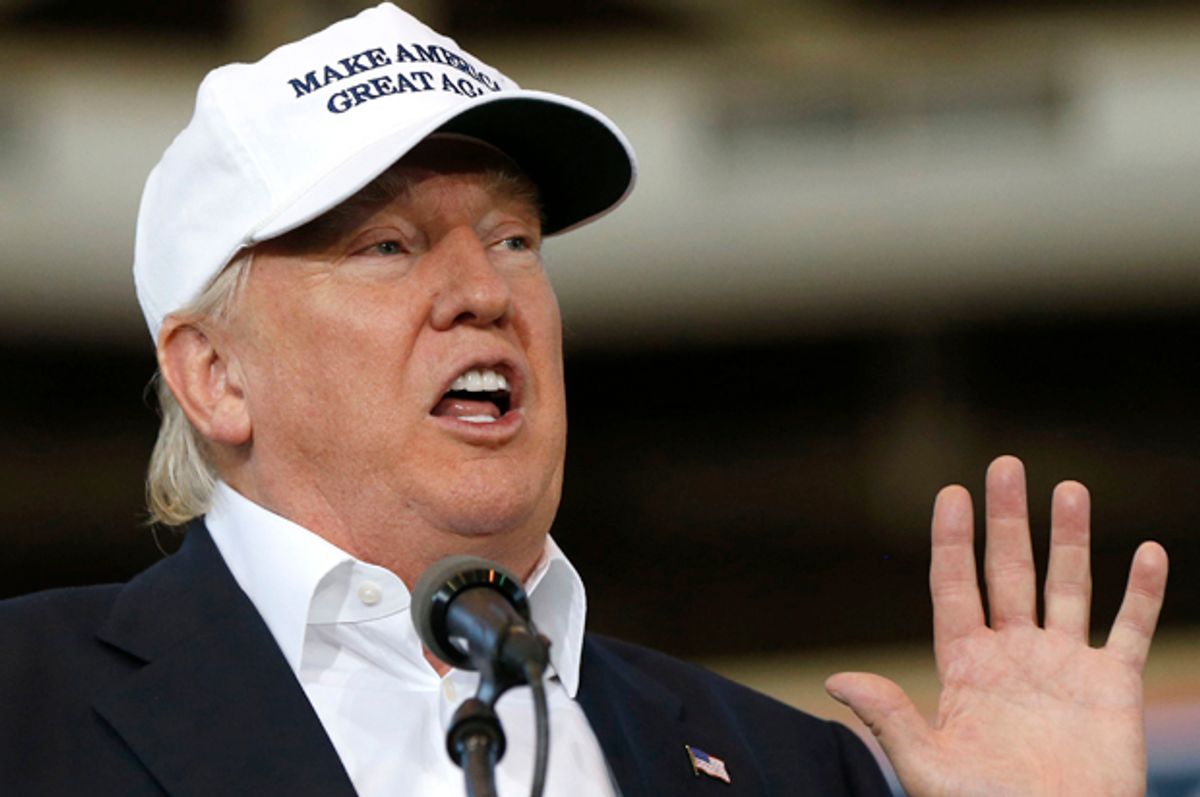 Donald Trump may have gone too far this time. Sure, pundits have frequently said that and just as frequently they've been wrong. But Trump is now trying to pull off an impossible feat: simultaneously appealing to moderates and hard-liners on immigration. This will fail. For proof one need look no further than President Barack Obama, whose orchestration of mass deportations utterly failed to entice Republican support for reform legislation that included a path to citizenship for undocumented people. That legislation is now as dead as it ever was, thanks to far-right xenophobic forces, which the president’s hard-line policies helped legitimate and have now fueled Trump’s rise.

Trump, that great border-wall builder and deportation force comandante, is not only Obama’s opponent on immigration but also, so to speak, his id. Mass deportation and border militarization have been bipartisan policy for decades, and the virulent tone of the debate only serves to obscure the important ways in which Trump’s proposals and his purportedly moderate critics’ policy records converge.

This isn’t some jeremiad seeking to make the case that both major parties or their candidates are the same. They’re not. But a cursory look at the history and reality of immigration enforcement and border policy make it clear that Trump’s fantastic pronouncements, however offensive, take the status quo enforcement regime’s logic to its most absurd and violent ends.

As Todd Miller wrote for TomDispatch, “Donald Trump’s United States doesn’t await his presidency” because “it’s happening every single day” on international boundaries policed by a Border Patrol that boasted nearly 21,000 agents in 2014 — a rise from just 4,139 agents in 1992 and 9,212 in 2000.

The media and pollsters have explored what voters think about Trump’s proposal to build a “big, beautiful, powerful wall" and his strangely compelling pledge that Mexico is going to pay for it. The southern border, however, not only already has an army of agents on patrol but also hundreds of miles of fencing. Instead of stopping migrants, that already-existing wall of enforcement has forced them into dangerous desert regions where extreme heat endangers their lives. The Border Patrol has reported finding the dead bodies of roughly 6,029 migrants from October 1997 to September 2013 alone.

Trump says and proposes horrible things. And the moderate consensus, known as “comprehensive immigration reform,” is a horrible if not equally repugnant euphemism for precisely this: a path to citizenship coupled with a doubling down on more of the same border militarization, deportation and guest worker programs to provide business with a second-class labor force. Legislation that's been under consideration in recent years would add yet more fencing and more Border Patrol agents, bringing the total force to an astounding minimum of 38,405. Simply put, this would cause more deaths.

For many Americans, the border with Mexico is less a real place than a fantastic canvas upon which to plaster billions of dollars in resources and limitless apocalyptic dread. Really, that’s been the case for decades as the country's changing demographics have become the scapegoat for the unsettling vicissitudes of global capitalism.

In reality, the two factors — the restructuring of economies and movement of capital and migration of people, or labor — are inextricably bound together. Mexican immigration to the United States began to rise modestly beginning in the 1960s, picked up its pace over the next two decades and then skyrocketed in the 1990s. And so just as borders sprung open for business under the North American Free Trade Agreement, they slammed shut for human beings. The pushes (in Mexico) and pulls (in the United States) that caused the mass influx of Mexican migrants are complex and heavily debated. But many scholars credit the role played by NAFTA, and business-friendly reforms in Mexico like the privatization of collective land, for decimating domestic agriculture and sending people northward in search of economic security.

Then came the attacks of Sept. 11, and anti-immigrant sentiment and border insecurity hysteria reached a new fever pitch. The attacks were perpetrated not by desert-crossing migrants but by a group of mostly Saudi men who arrived legally on tourist and business visas and in one case a student visa, that random people will always be able to use. U.S. immigration policy, however, has never had much to do with the reality of immigration. And Immigration and Naturalization Services became Immigration and Customs Enforcement and border policy was subsumed to the "war on terror." A deportation machine with gargantuan funding, facilitated by President Bill Clinton’s 1996 Illegal Immigration Reform and Immigrant Responsibility Act, roared into life.

As sociologists Patricia Fernández-Kelly and Douglas S. Massey wrote, “Homeland Security was established with a clear mandate to protect the nation from terrorist threats, but its principal effect has been to terrorize immigrant workers from Mexico and Central America.”

Ironically, militarization of the border didn’t dissuade migrants from coming to the United States. In fact, it played a role in dissuading them from returning to Mexico: Those who in the past may have engaged in “circular migration” (frequently traveling back and forth) became long-term or permanent residents in the States instead. Although one wouldn’t know it from the state of political discourse, the recent undocumented migration wave from Mexico has long been over. Arrivals to the United States have declined so significantly since their 2007 peak that the net flow of unauthorized migrants is now negative. From 2009 to 2014, according to the Pew Research Center, an estimated 870,000 Mexican immigrants came to the U.S. while roughly 1 million headed in the other direction.

Now the U.S. is reaping more of what it has sown from Central America, where U.S.-backed dirty wars during the 1980s sent a wave of refugees northward. Mass deportations, facilitated by the Illegal Immigration Reform and Immigrant Responsibility Act, have sent many of their descendants back south. Members of Los Angeles-born street gangs were deported, which in turn created violent and transnational criminal organizations that have helped plunge much of Central America into bloody chaos — and today propel new waves of terrorized migrants back north.

Trump’s unfiltered xenophobia and muscular nationalism is alarming. It also crowds out serious discussion of the fact the Customs and Border Protection already runs a police state, not only at the border but also across huge swaths of the interior. Despite recent moves toward reform, the agency also has an ugly history of excessive force, secrecy and impunity. That includes operating a huge network of Border Patrol checkpoints within the U.S. that subject everyone, regardless of immigration status, to regular interrogation and search by federal agents in the course of everyday domestic travel.

Meanwhile, what Trump might dub a “deportation force” deported a record 435,498 people in 2013 (depending on the numbers one uses). Deportations decreased significantly last year, thanks to widespread protests from immigration activists. But even as the deportation machine has slowed, it has not stopped. The Obama administration has continued to rely on local law enforcement personnel to serve as proxy immigration agents, part of an emphasis on deporting “criminal aliens” instead of hardworking people with families. That obscures the reality that criminals aren’t always what they seem, however. As I wrote in June, they include people like Garfield Kenault Lawrence, convicted on low-level marijuana charges, who came to the United States as a child and is now forced to live in poverty in Jamaica, separated from his American wife and son.

Obama, like the previous president much demonized by Democrats, has not only cracked down on so-called criminal immigrants but also criminalized immigration. His administration has prosecuted illegal entry and reentry as federal crimes en masse and turned border crossings into major components of federal mass incarceration. Trump’s conflation of public safety and immigration makes sense to people in part because it is the premise of current public policy.

Similarly, when Obama and Hillary Clinton call for securing the borders, they ratify far-right propaganda that the region is a lawless war zone and render invisible the unprecedented and militarized infrastructure already in place. Trump’s proposals are absurd, cruel and contradictory but they are grounded in a mainstream consensus on immigration that is likewise all of those things.

On immigration, there are important differences between the two major parties. But the most important difference is that Democrats are now more susceptible than ever to the pressure exerted by mobilized immigrant communities. Immigrant activists deserve credit for the Obama Administration’s two programs protecting undocumented immigrants from mass deportation: Deferred Action for Childhood Arrivals, which has protected hundreds of thousands of youth; and Deferred Action for Parents of Americans and Lawful Permanent Residents, which has been put on hold by a federal judge whose ruling was affirmed by a split Supreme Court.

The moderate consensus is a proposal for legal status for some in immigrants in exchange for the deportation of those deemed undesirable and billions more to further militarize a border administered by well-connected private contractors. The fact that Trump and the white racist anti-immigrant fringe call for yet worse should not distract from this ugly reality. Trump is dangerous, and immigration activists are in no way deluded in believing that Hillary Clinton can deliver a better deal (and must be forced to). Trump’s demagoguery is frightening. But if we open our eyes it’s clear that the nightmare already exists.