"I reject the word 'hoax'": Laura Albert opens up about creating JT LeRoy

Salon talks to Albert, whose "avatar" caused a stir even before the truth came out, about the documentary "Author" 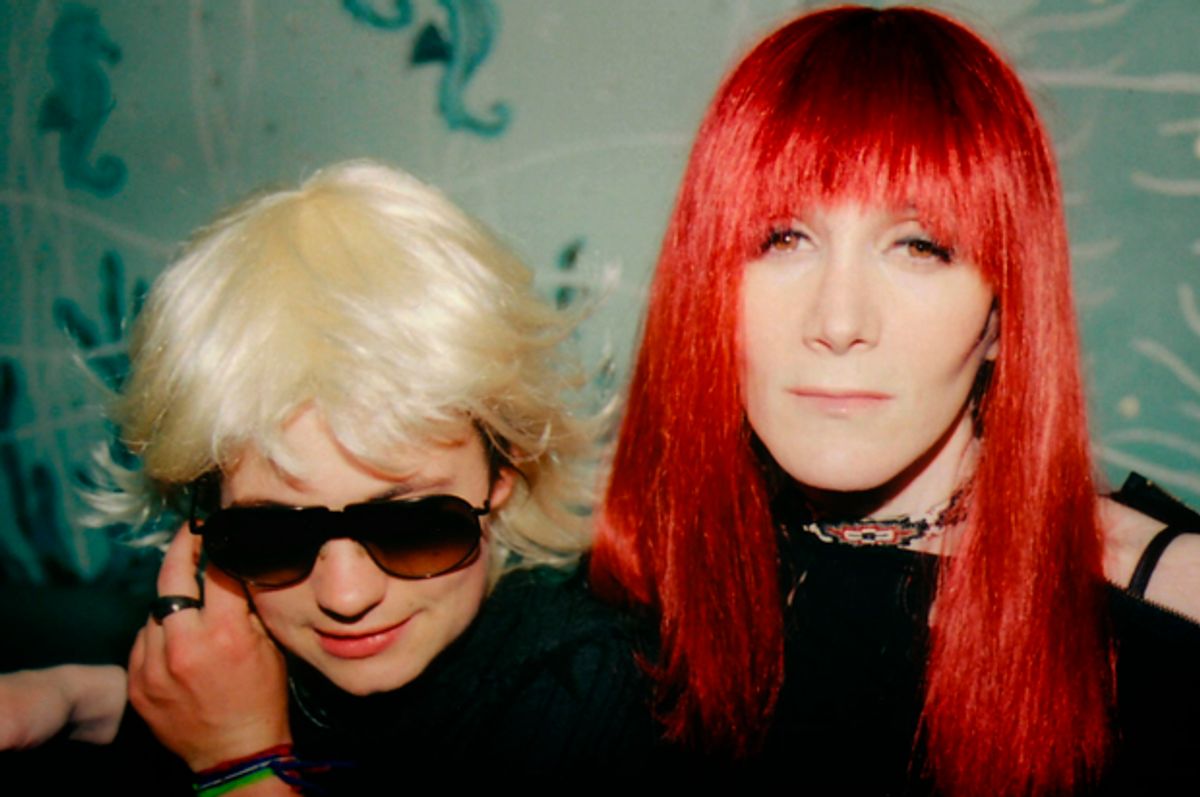 The new documentary, “Author: The JT LeRoy Story,” recounts the career of JT (Jeremiah Terminator) LeRoy, a writer who stunned the literary world with his books, “Sarah” and “The Heart Is Deceitful Above All Things.” LeRoy came complete with a remarkable personal history, too. He was the son of a truck stop prostitute who had him at 14. He didn’t show his face to the press. (“He’s shy” was the reason.) When he was 13, he was turning tricks and living on the street. He was a drug addict and a homeless HIV+ teen who wanted to change his gender. JT LeRoy was a sensation, attracting celebrities who would read his work at public events and filmmakers like Gus Van Sant and Asia Argento who would collaborate with him on movies. Van Sant made LeRoy an associate producer on his film “Elephant,” while Argento directed the screen version of “The Heart Is Deceitful Above All Things.”

LeRoy also stunned the world when he was revealed to be the pen name of Laura Albert. She wrote the books; her sister-in-law Savannah, wearing a wig and sunglasses, posed as JT in public. As the documentary “Author: The JT LeRoy Story” recounts, Albert had a troubled life. She struggled with body image issues. She was the victim of abuse. She introduced herself as a young boy and became addicted to assuming that persona. She once pretended to be British to snag a skinhead boyfriend. She worked as a phone sex operator. She had been institutionalized twice as a teenager. She also performed in the band Thistle, and, under the pseudonym of a woman named Emily, she wrote for HBO’s “Deadwood.”

What is the truth? And does it matter if the story is as compelling as JT LeRoy/Laura Albert’s? Salon chatted with Albert, on the phone from San Francisco, about her life, her work and “Author: The JT LeRoy Story.”

In the film, there is “the Bono talk” about celebrity — where Bono tells JT backstage at a concert, “Remember who you are and where you come from.” JT was who you were and where you came from. What prompted you to create this literary persona?

There were many “boys” before JT. I can’t remember not having stories in my head. I’d put myself to sleep with different “boy” stories. It was like watching a TV channel. Sometimes they would die, and sometimes they’d be rescued. It was like a soap opera. My sister couldn’t sleep and I would tell her to listen to the “boys.” She didn’t hear them, and that blew my mind. Then I realized there was something very different about me. I didn’t tell anyone about it.

For the hoax to work, it was critical that you showed just enough of JT to get people interested. How did you determine what and when and how to reveal JT as you did?

I reject the word “hoax.” To me, a hoax is something you do for an opening weekend to get people into a movie. For me, it wasn’t like that. It was Jeremiah’s true story as told to me. When I was working on “Deadwood,” we’d follow the trajectory of the characters’ truth as if they were real people.

The thing is, I realized that JT’s world was so complete, it didn’t need me; it was self-sustaining. There were holes in it, but the emotional truth was so present that people stayed in that world. I was able to move into myself. A magician throws the light and hides an elephant in the dark. I was able to throw the attention.

The books are real. They may be fiction, “with a little extra,” as the film suggests, but people were inspired by them, even if they know they are “creations.” It’s like the Tinkerbell metaphor you give in the film, “If you believe . . .”

Yes, ultimately it doesn’t matter. I don’t judge other people when it comes to art.

What’s important to me is that I believed more than anybody. It is hard for people to wrap their head around. I was inside and outside the crazy. I needed to normalize it for other people, like my mother, who put me in an institution where I was molested right after my 14th birthday.

You worked as a phone sex operator, which involved creating fantasies to get men off. Can you discuss that experience?

I ran the mafia’s phone sex line in New York when I was 15. I was training other women because I was so fucking good. My mother put the line in. I wasn’t going to school and I was earning my keep and paying for my punk rock habit.

What did you mean when you told Billy Corgan, “JT was an accident?”

Dr. Owen [JT’s therapist] told Terminator to write. He was having a hard time holding on in sessions. He wrote “Balloon,” which is animated beautifully in the film. I was surprised because I thought he’d write about being on the street, but it was completely different. Even though Terminator — who became JT — got published, it was very organic. There was never a book agent. I was offered a book deal. It was an accident. I gave up the first book deal with Random House, because I thought the work wasn’t ready. I walked away from it. I read, studied and had a baby. I was going to be a mom and done with all the “boys.” I threw out a bunch of stuff. And yet, it wasn’t done with me. It wasn’t something I chose.

After I had my son, I wrote “Meteors” [a story in “The Heart Is Deceitful Above All Things”] and “Sarah,” and I had not written in three years. I sent it to Mary Gaitskill, and she told me to read Vladimir Nabokov and Flannery O’Connor, and that helped me see in a different way. I didn’t complete seventh grade because of an injury, and by eighth grade, I was a chronic truant. I had teachers come to my house. I was in special ed and had psychiatric [care]. I read a comic book version of “The Scarlet Letter.” I got a scholarship to The New School. I got in without SATs because they took a risk for a group home girl.

What makes a good story for you?

It’s interesting, I’ve been thinking about that. I thought it was a character I can care about. I’ve been reading Annie Proulx's “Barkskins,” and I feel she hates people. The characters are people you care about, but the language and the way she takes you into the story, and how she creates this vessel to contain it, is compelling and absorbing, so it’s not just character. It’s "How do you take problems of soul and spirit and make them into issues of craft and technique?"

You were sued for signing contracts as JT LeRoy. How (or did) you make money from the books and film projects?

The money was so nominal. I got $24,000 for them, but I read about my millions. [Laughs.] I have a legal document saying that I’m a pauper in court. It’s Dickensian. There was no big swindle.

It’s important to remember people came to JT. There were artists. I came up in the punk scene. My mother was a musical playwright and she took me to meet Marvin Hamlisch and Sammy Cahn. I met Ian MacKaye. Artist to artist, you were their equal. I was doing journalism. It wasn’t about celebrity.

There were dozens of celebrities who admired your work, and defended JT . . .

I didn’t pursue them. I wasn’t interested in them except as artist to artist. [The work] resonated with them — or it didn’t. Once it reached the tipping point, people were coming to JT. Jeff [Feuerzeig, the director of “Author”] can tell you:

[Albert puts Feuerzeig on the line.]

Feuerzeig: I came to learn — and the film shows — the deeper relationships of Gus van Sant and Asia Argento who collaborated with JT. They read the books and wanted to make the film(s). Bono sent backstage passes [stating], “I love your work.” Laura told me in our interview process that these were artist-to-artist connections. The other relationships — she felt them with Billy Corgan and David Milch — paid off. She reached out to them on their own. There were a lot of celebrities around. Clearly many people read these books and reached out to JT.

[Jeff hands the phone back to Laura.]

Laura, how many people, at the time of JT’s fame, actually knew you were writing the books, and that Savannah was JT [in public]?

The number grew. At first it was very small. I found out a lot more people knew. A friend of mine from college heard me on the radio. They knew I did this kind of thing — that I had different characters. It was a lie agreed upon. The authenticity of the work allowed people to suspend belief.

How long did the whole JT thing go on?

You felt shame when you were teased as a kid, and when JT was exposed. But you must have felt some form of pride seeing JT become a sensation beyond imagination. Can you describe your emotions?

It wasn’t me. I stared at pictures of JT. It took a long time until I saw Savannah.

Jeff [Feuerzeig] did a beautiful job with the complexity of the story. It’s easy to do: Is she bad? Is she crazy? Is it a hoax?

Did I lie? Yes. Did I know? Yes. Did I apologize? Yes. Do I feel bad? I do for some people. This whole process has allowed me to be in my own skin now. I couldn’t do that with an avatar. But I can do that now, and share what happened.

It’s hard to not have your name on the books I wrote. John Waters said it’s un-American to reject fame. I was un-American. It’s great to have my name and photo on the book now. And now, I’m writing my memoir.