Jews must speak out against Islamophobia: Standing with our Muslim brothers and sisters is critical

Our communities have a shared understanding of oppression. Forging a new solidarity is crucial to the future 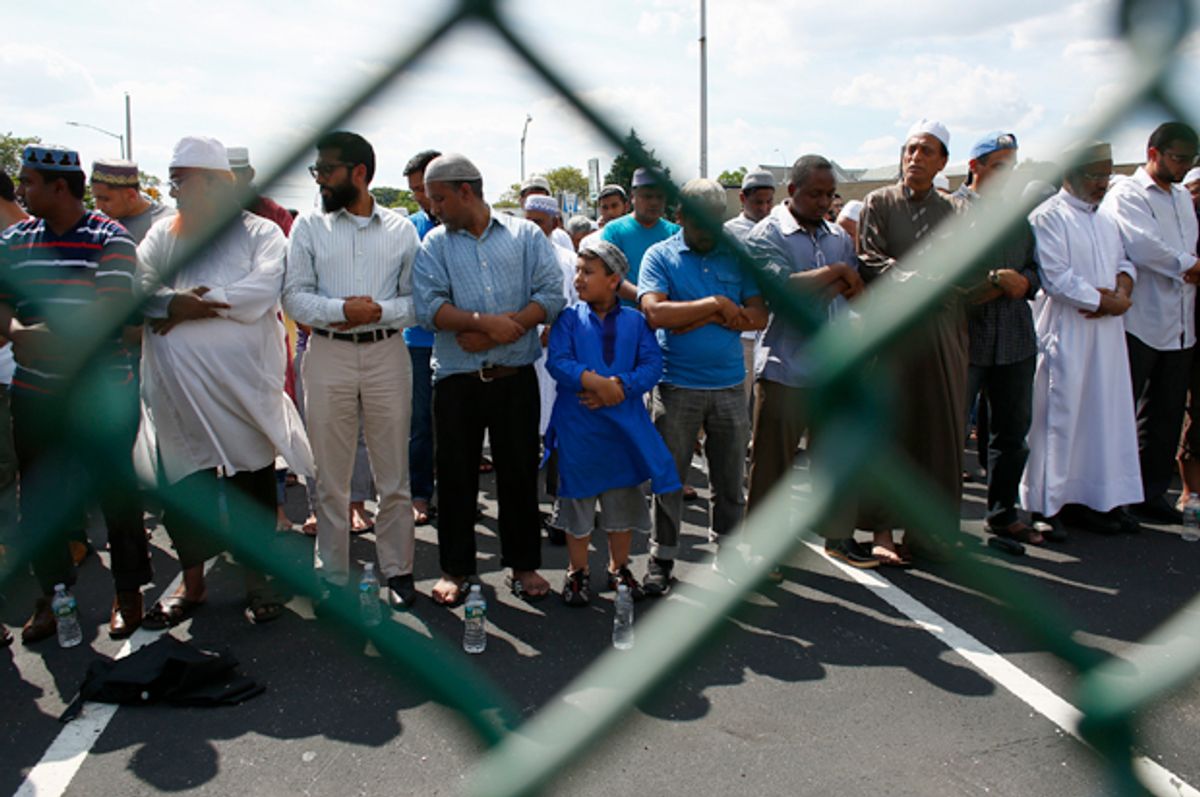 When news first broke earlier this week that a mosque in Orlando had been set on fire, presumably because it had been attended by Omar Mateen, the man who in June shot 49 people to death at the nightclub Pulse, I immediately thought of Alaa Basatneh. Three weeks earlier I’d interviewed the Syrian-American journalist and activist and had been struck by her optimism.

“I do have faith that, down the road, just like the Jews faced a lot of negativity in the past in the U.S. — and the Irish, the Italians, the Japanese, you know the entire list— things are going to be the same for Muslims,” she had told me. “It’s going to take a lot of time and effort from the Muslim-American community.”

But the arson at the Orlando mosque served as a reminder to me that the Muslim-American community shouldn’t have to go through this alone. More than ever, Jews and other marginalized groups have a moral responsibility to stand with our nation’s Muslims as they continue to face bigotry and persecution.

The good news is that over the past year many Jews have taken steps to do precisely that. In December Jewish activists held demonstrations on each day of Hanukkah  in 15 U.S. cities to protest anti-Muslim hate speech and public policies. In May, nine Jewish groups joined more than 30 other organizations to support a bill that would forbid the government to turn away immigrants based on religion, a clear response to Republican presidential nominee Donald Trump’s proposed ban on Muslim immigration. Around the same time, the American Jewish Community called for The Citadel to let Muslim students wear hijabs, while in New Jersey the American Association of Jewish Lawyers and Jurists lent their support to Muslims who are trying to build a mosque in the town of Basking Ridge.

And in recent years some Muslims have clearly demonstrated their rejection of anti-Semitism. In 2013 11 prominent imams, sheiks and religious teachers traveled to Auschwitz from nine nations to counter Holocaust denial. Also that year President Barack Obama personally congratulated a young Swedish Muslim activist, Siavosh Derakhti, for having founded Young People Against Anti-Semitism and Xenophobia to combat prejudice in his country. In November 2015 hundreds of Norwegian Muslims formed a human shield around a synagogue in Oslo to express solidarity with the Jewish community there after an attack on a synagogue in Denmark. And in the March Democratic primary in Dearborn, Michigan, a city with many Muslims and Arab-Americans, a majority of voters voted for Sen. Bernie Sanders, who happens to be the country's first major Jewish presidential candidate.

Although both sides have laid the groundwork for building Jewish-Muslim solidarity piece by piece, those efforts must be redoubled whenever one group yet again experiences mistreatment.

With the poisonous influence of anti-Semitism or Islamophobia, millions of individuals can be held accountable for the actions of another who happens to share their faith.

As Basatneh said when I asked for her reaction to the Orlando mosque attack, “What’s upsetting is that one person’s actions are taken out [and superimposed over] an entire religion. Had I been at that mosque, I would have been hurt, even though I stand firmly against terrorism.”

I think this holds true not just for other Muslims who have been attacked because of the actions of a violent few but when Jews are collectively blamed for Israel’s mistreatment of Palestinians (as happened in 2014  during anti-Semitic riots in Paris).

Whether we like it or not, the spotlight is on both communities because Jews and Palestinians of Muslim and Christian faith as well as others are embroiled in a bloody, decades-long conflict in Israel. As a result, many have grown to expect that Jews and Muslims everywhere will inevitably become foes, and it behooves individuals in both groups to defy those assumptions. When we don’t speak out against hateful words and deeds directed against the other, our silence can (unfairly or otherwise) be read as indifference or even implicit approval.

Perhaps the key to avoiding this can be found in a theory Basatneh shared with me why Muslims supported Sanders. “They understood what he was talking about and what he was preaching in terms of rights for all,” she suggested, recalling when he took the hand of a Muslim student asking a question about Islamophobia at a Virginia town hall and hugged her, noting that his father's family had died in concentration camps and adding that he will everything he can to rid the country of the ugly stain of racism.

That moment touched many Muslims because he simply showed that he was “a human being that understood the struggle of the Muslim-American,” Basatneh said.

When Jews tell Muslims that we, too, identify with their pain, and when they do likewise, our society is taking small but meaningful strides toward overcoming the hostilities groups express toward one another.

These individual steps may not seem like much, but they add up and ultimately do make a difference.

That’s why I call on my fellow Jews to be at the forefront of the call to condemn the arson attack against the Orlando mosque. Those of us who don’t do the right thing now may, I suspect, regret their silence in later years.