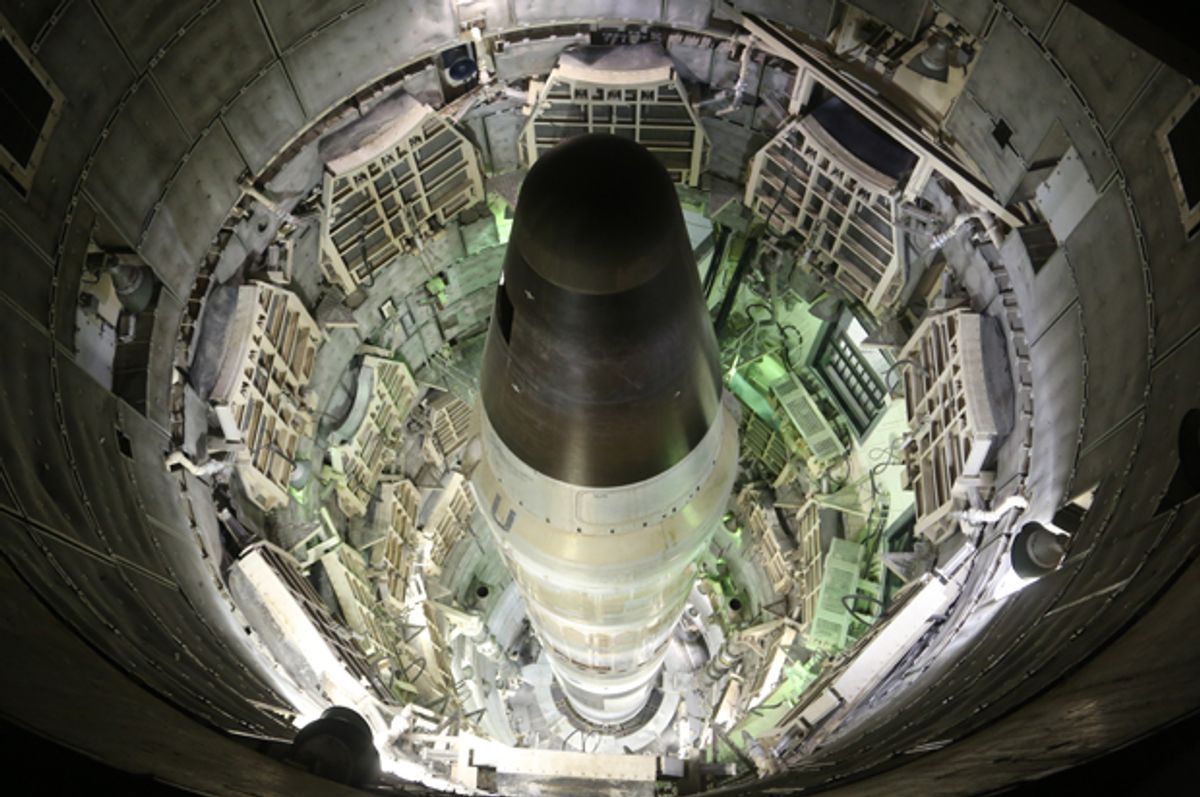 On a September night 36 years ago, we nearly lost Arkansas. Some people may regard that as a mixed blessing, even now — Bill Clinton and his wife, then the governor and first lady of that state, were less than 50 miles away in Little Rock, at the Arkansas Democratic Convention.

If the Titan 2 intercontinental ballistic missile, or ICBM, that exploded inside its silo in Damascus, Arkansas, had detonated its nuclear warhead, both the Clintons and Vice President Walter Mondale (also attending the convention) would have been dead within minutes. So would have millions of other people in Arkansas and neighboring states, with a plume of deadly radioactive fallout extending from the mid-South to the East Coast, perhaps as far as Washington.

It’s not entirely fair to say that the near-catastrophe of 1980 was covered up. But Americans were not even remotely told the truth about how close we came to nuclear Armageddon in the heartland. In fact, when Mondale demanded to know whether the Damascus missile was armed with a nuclear warhead, the military initially refused to tell him. “In my book, I have a quote from someone who was in the room,” said author Eric Schlosser during a recent video interview in Salon’s New York office. “Mondale said, ‘Goddamn it, I’m the vice president of the United States! You should be able to tell me if there’s a nuclear warhead on this missile or not. Eventually they did.”

Schlosser’s book is called “Command and Control,” and is also the basis for a thriller-style documentary of the same title from “Food, Inc.” director Robert Kenner, who joined Schlosser for our conversation. As Schlosser explained, local and national news covered the Damascus accident for two or three days but without understanding quite how bad it was.

“It was one of the first stories covered by the new network called CNN,” he said. Then it quickly faded from view. “There was a presidential election going on,” Schlosser continued. “Jimmy Carter was running against Ronald Reagan. We had hostages in Iran — that was a daily news story.”

Schlosser added, “Most importantly, the Pentagon denied that there was any possibility that this warhead could have detonated and that was accepted by the media. It wasn’t until I really started researching this accident that I was able to do interviews and obtain documents that showed conclusively that this warhead was at risk of detonating accidentally.”

In the film, which opens in New York this week, Kenner interviews a former military contractor who designed the safety mechanisms on the Titan 2, the most powerful nuclear missile ever deployed by the United States. “I started to ask him whether the warhead really could have gone off because of this accident,” Kenner told me. “He interrupted me before I could finish the question. ‘Yes,’ he told me. ‘It absolutely could have.’”

How close did a simple maintenance mishap come to rendering at least one American state uninhabitable and killing an unknown number of people? And what does that tell us about the security and safety of the deadliest weapons ever built in human history? We don’t know the answer to the first question, and the second one raises extremely troubling issues.

I don’t want to spoil the gripping and improbable details of Kenner’s film, but how the Damascus accident started is no big secret. A pair of maintenance workers accidentally dropped an 8-pound socket into the shaft of the missile silo — essentially a larger version of the same type of socket a mechanic might use to remove engine bolts on your car. It bounced off a support gantry at high velocity and ricocheted into the side of the missile, opening a hole in the fuel tank that immediately began to spray compressed gas into the silo.

You might assume that a massively powerful nuclear warhead, which Schlosser said was “three times more powerful than all the bombs used by all the armies in the Second World War,” including the two atomic bombs dropped on Japan, would have multiple and redundant safety features to protect it from such a fluke event. You would be wrong.

If the fuel spraying into the missile silo ignited or the fuel tank decompressed and collapsed, the missile would surely have exploded. Whether such an explosion would be hot enough or powerful enough to detonate the Titan’s nuclear warhead or would not quite reach that level — well, according to Schlosser, no one was quite sure about that. “This is the one and only time that a warhead of this design was involved in a serious accident,” he said. “Obviously it didn’t detonate because we would know if it had. But you wouldn’t want to try this accident five times.”

In addition to claiming that the warhead was never in danger of detonating, the Pentagon’s official report on the Damascus accident described the socket accident as a “one-in-a-million” event. Kenner said that while filming inside the only surviving Titan 2 silo, an exact duplicate of the one in Damascus, his crew dropped 12 sockets down the silo shaft. Six of them bounced back and hit the side of the missile. Even so, the details of the Damascus accident are less important than what the incident tells us about “the whole experience of our history with nuclear weapons,” in Kenner’s words, and all the potential and hypothetical things that could go wrong.

“It’s a low-probability event that something could go wrong,” Kenner said during our video conversation. “But [there is] an incredibly high consequence if it does go wrong — unimaginably high. What made me want to make the film was the fact that we’ve stopped thinking about this.”

Kenner continued, “The consequence of a nuclear accident is perhaps the most important issue we’re not talking about. I’ve done a film on climate change [and its corporate deniers], called ‘Merchants of Doubt,’ and that’s an incredibly important issue. But we are talking about it. Here’s one where we’re not, and the more we don’t talk about it, the more dangerous it becomes.”

As both Schlosser’s book and Kenner’s film explore (the former in more detail), there have been numerous near-miss accidents in the history of our nuclear arsenal, and other nuclear nations have certainly had accidents that we don’t know about. In fact there was another serious accident during the same week in 1980, Schlosser said, when a bomber loaded with 12 hydrogen bombs caught on fire at an air base in North Dakota. And it’s not as if nuclear weapons suddenly disappeared or became harmless at the end of the Cold War. There was a potentially serious accident two years ago at a Minuteman missile site in Colorado, Schlosser said, that has received little attention.

What we know about the Colorado accident “is very similar to what happens in the film,” Schlosser said. “There were some maintenance guys working on a Minuteman missile in the silo. They were doing some diagnostic tests and something went wrong. They brought in another team the next day and something really went wrong.”

He pointed out, “We don’t know if the warhead was armed, and we don’t know how serious an accident it was. The Air Force by law is supposed to release an accident investigation report, and they’ve refused to do that in this case.”

While the danger of a nuclear-weapons accident partly results from aging and unreliable technology — most of our weapons systems are three to five decades old and run by antediluvian computer systems — the larger risk Schlosser sees is human error and imperfection. “A glitch in the software controlling our nuclear weapons or a mechanical fault within one of those weapons could destroy entire cities or start a war,” he said. “I know that sounds like hyperbole, but people much smarter than me with much more knowledge of the subject right now are really worried about it.”

Schlosser also sees a risk of nuclear apocalypse hidden in plain sight, amid the 2016 presidential campaign. In a portion of our interview that has already been circulated on social media, he said, “It’s extraordinary that there’s any possibility Donald Trump could be president of the United States and commander in chief [of our military] and in charge of our nuclear arsenal.”

He elaborated: “Under the law, the only person who’s authorized to order the use of nuclear weapons is the president. And he or she is pretty much unrestricted about when he or she wants to use them. If you’re a maintenance worker, if you’re a launch officer — anyone in the military who has to deal with nuclear weapons has to go through something called the personnel reliability program. It’s basically a personality test to see if you should be let anywhere near nuclear weapons. Donald Trump would fail that on every score.”

”Command and Control” is now playing at Film Forum in New York. It opens Sept. 23 in Toronto and Washington; Sept. 30 in Boston, Los Angeles and Philadelphia; Oct. 7 in Chicago, Denver, Minneapolis and San Diego; and Oct. 14 in Atlanta and San Francisco, with other cities, home video release and PBS broadcast to follow.