Breaking: "I taught a shaman the true meaning of ayahuasca!": The Greatest Living American Writer

A journey of 1,000 words begins with a single dose of hipster hallucinogen for the Greatest Living American Writer 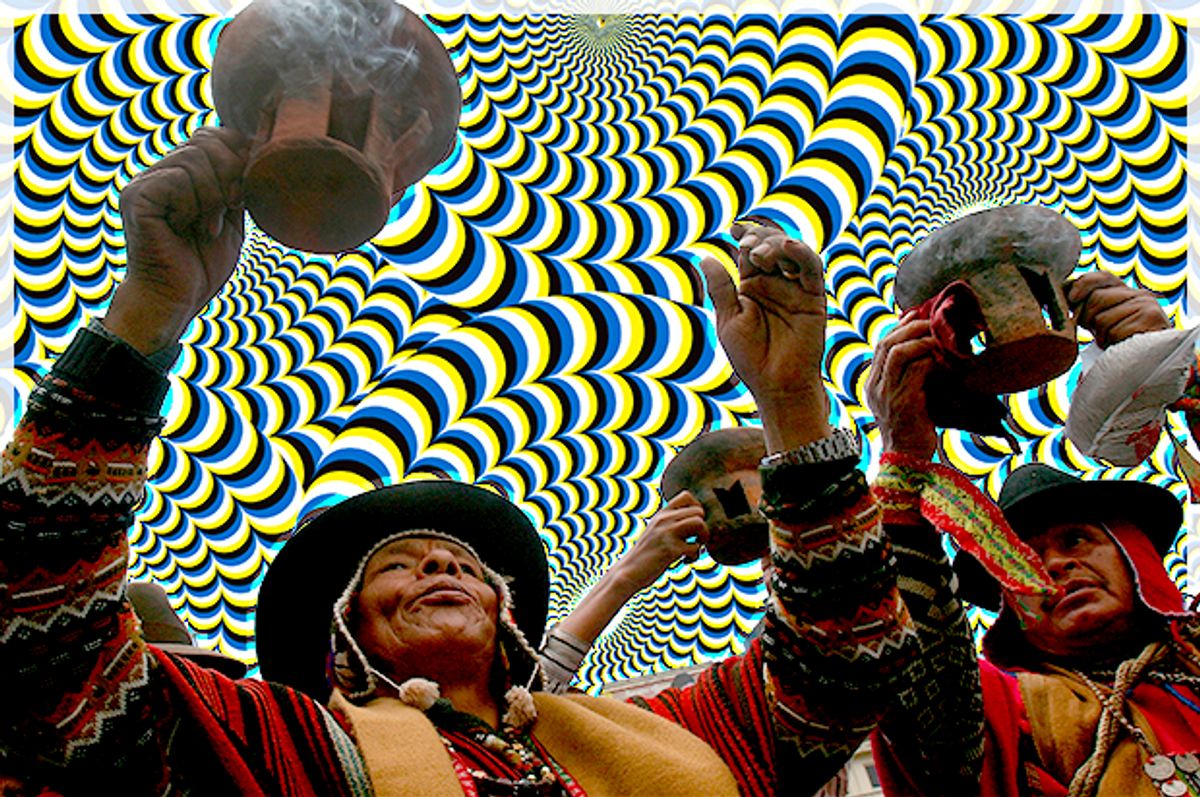 As an American author of note and merit, I’ve often used drugs to stimulate my already-outstanding creative process. Witness the creatures who populate the “Interregnum” in my award-winning avant-garde 1966 metafiction, "Semi-Nude Brunch," or my extended essay "The Windows of Conception," written after a megadose of LSD, in which visions of my imaginary spirit guide, Dr. Juan Navajo, implore me to “move to Los Angeles” and “tell stories about the desert.” Those books continue to inspire inspired PCP-laced imitations from countless sophomores, as does "Shopping With Satan," the true story of how I took psychedelic mushrooms and went to Macy’s with Anton LaVey.

No, no, of course, I haven't forgotten "Heroin and The Peanut Farmer," where I shoot up on the back of Jimmy Carter’s press bus. It's true that it did less well upon its publication in 1977, but I stand by that work regardless. I smoked chiba with Capote and Kerouac (very fun), raved on E with Jane Smiley and Annie Dillard (less fun), and on one memorable night, snorted a Matterhorn of cocaine off Joyce Carol Oates’ kitchen table, which really gave Joyce Carol a shock when she came home from writing her third novel that week. Paul Bowles once treated me to a baked hash tagine in the secret gay souk of Marrakech. And I am high as I write this right now. Drugs, I have done.

Ayahuasca is an ancient Peruvian word that means “plant that makes you vomit into a bucket while saying omigod.” In "The Incan Book of the Dead," it is described as a “sacred rite” that will “split open your brain” but the shamans also caution us: “You still have to go to work in the morning.” Ayahuasca was first brought to the United States by a guy and then Daniel Pinchbeck tried it so no one took it seriously, but gradually it started appearing in mainstream media outlets, including a weird feature in "Bon Appetit" entitled “Seven Awesome Hallucinogenics That Are Helping to Gentrify Portland.”

I went to my ayahuasca ceremony at 7 p.m. on a Friday night. Since this was in San Francisco, I expected to be surrounded by free spirits and hippies, the latter-day heirs of which I wrote about in my famed 1967 Esquire article "The Amazing Tang Salad Acid Party." When I arrived, there were already six voyagers sitting in a circle, all swiping at the air while wearing virtual reality headsets. I introduced myself. The guy next to me said, “Alexa, call Andreessen Horowitz."

“How do you spend your days, fellow spiritual drug questers?” I asked.

“I’m an angel investor in autonomous vehicle, marijuana tech and 3-D printing startups,” one of them said.

Our shaman entered the room, wearing a guayabera and expensive sandals. She said, “My name is Ariel, but really my name is also Whitney. I am an organic lifestyle consultant and I’m here to take you on a journey.” She waved her hand in the air and said, “Alexa, play the nonspecific humming music.” The lights dimmed and a droning sound began to fill the room.

“You are about to undertake a sacred rite,” she said.

“How long will it take?” someone asked. “I have to do a Spartan race tomorrow morning.”

“All night,” Ariel who is also Whitney said, “if you’re lucky. Don’t rush things. Remember what the dormouse said. Feed your head for maximum efficiency and inspiration.”

Ayahuasca’s preparation involves stewing some plant in a pot for a while, without spices or even a bay leaf or Sriracha for flavor. As Ariel began mixing the sacred brew in front of us, while chanting, “ohm shanti shanti,” the smell affected me. I grabbed the bucket that was sitting behind me and unleashed a massive stream of vomit.

“Sorry,” I said. “I had a huge burrito in the Mission right before coming over here.”

Everyone inched away from me, unsubtly.

Soon enough, Ariel passed around the ayahuasca brew, in little paper cups. I sipped mine. It tasted like tea that had been brewed in a beaver’s asshole.

“Usually,” the shaman said, “we wait to see if the first one has an effect.”

With that, I vomited again, threw my head back and said, “Whoa.”

Next to me, a fellow traveler stood. She shouted ecstatically, “I have a vision of how virtual gaming can revolutionize Silicon Valley’s corporate management structure!”

All around me, dusk gave way to midnight and then gradually to dawn. People were writhing, weeping, retching, having ayahuasca-influenced ideas that would impact the global economy for at least the next 18 months and possibly longer. I smiled to myself and then I touched myself in a special place.

My ayahuasca-saturated mind filled with a vision of Norman Mailer and Gore Vidal running, withered, naked and terrified, through a field chased by the Grim Reaper. Christopher Hitchens hung on a cross, flayed by his own words. By the river, Philip Roth wept, saying, “I’m sorry I ever doubted you. You win, Pollack, you win.” Even Joyce Carol was there, saying, “By the curse of the devil who gave me immortal life, I concede. I concede.”

The ayahuasca had delivered onto me its sacred promise, its holy mission. Upon the mount I stood, unbowed. I knew then at that very moment, as I know now and will know always, that I am the greatest writer in the world.