The Clinton BS Files: Conspiracy theorists paint the Branch Davidian mass suicide as murder at the hands of the Clinton administration 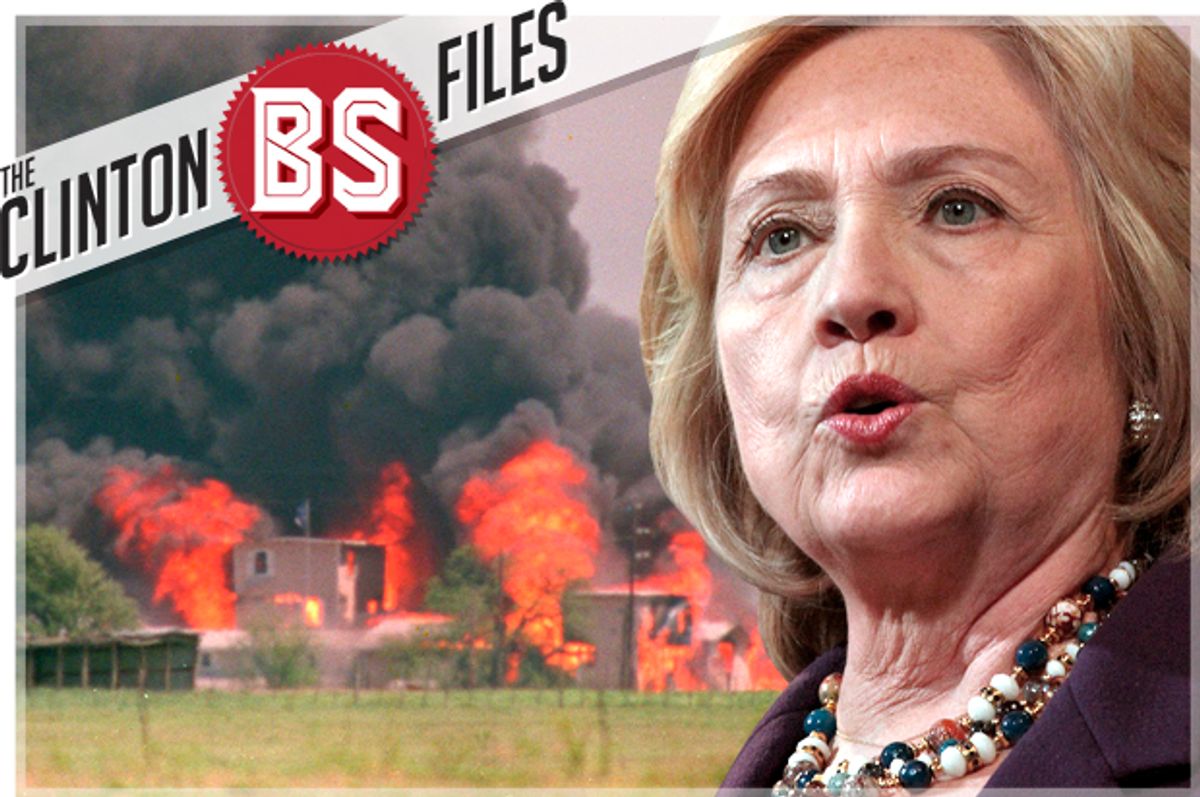 The most important thing to understand about the tragic events in Waco, Texas, on April 19, 1993 is that members of a cult called the Branch Davidians, under the leadership of David Koresh, committed mass suicide. It was they, and not federal agents, who lit a fire that led to the death of 79 people, including more than two dozen children.

The Davidians had been in a tense standoff with officials from the Federal Bureau of Investigation and the Bureau of Alcohol, Tobacco, Firearms and Explosives for 51 days. On Feb. 28, the ATF came to the cult's compound to arrest Koresh for stockpiling illegal weapons. Instead of turning him over, the Davidians engaged in a firefight with officials that led to the six-week standoff. During this time, the Davidians repeatedly threatened to set the place on fire and sent out hints about mass suicide. When federal officials decided to move into the compound, the Davidians set the place ablaze and most stayed and died rather than flee.

These are the facts. But ever since the events of April 19, 1993, there have been wild conspiracy theories accusing the federal government, under the control of then attorney general Janet Reno and president Bill Clinton, of everything from reckless disregard for the people inside to outright murder. Rush Limbaugh has long called it the "Waco invasion." Alex Jones has called Reno the "Butcher of Waco" and claimed that the Davidians were "murdered" by the government.

Donald Trump buddy and unofficial adviser Roger Stone even has accused Hillary Clinton, not Bill, of being the one behind the deaths in Waco.

To understand why the incident at Waco is such a flashpoint for the right-wing conspiracy theorists, it's important to understand the main characters involved. On one side, you have the cult leader Koresh, who was the apotheosis of the Christian-conservative libertarian-inflected ideology that rejects government power and glorifies the patriarchal authority a man exerts at home. Koresh was really living the dream of being the king of his fortified compound, where he amassed guns and 20 wives — some as young as 11 — in equal measures.

On the flip side, you have Reno, a figure that provoked misogynist anxieties from the moment she stepped on the national stage. Reno was over 6 feet tall, unapologetically single and viewed as mannish with her short hair and her large eyeglasses. Liza Mundy of the Washington Post summarized in 1998 how much Reno's rejection of certain feminine norms made her a point of sexist fascination:

The culture gropes for an archetype, a way to understand her, some means of comparison. After the Waco disaster and her Truman-like assumption of responsibility, Spy magazine superimposed Reno's head over the pumped-up pectorals of Arnold Schwarzenegger in "The Terminator." More recently, the Weekly World News tabloid superimposed her head over the body of a fleshy model wearing a swimsuit and platform shoes ("Janet Reno . . . as you've NEVER seen her before!" promised the headline to the story, which purported to show how men in Japan salivate over Reno), while Jay Leno took the opposite approach, superimposing her head on the body of Xena: Warrior Princess, a TV heroine who is also a lesbian icon.

Even as recently as 2006, Ted Nugent performed his song "Kiss My Glock," a song that calls Reno a "dirty whore," while firing arrows at an effigy of Reno until her "penis" is revealed.

It isn't too much of a stretch, under the circumstances, to say that the Waco fire, in the mind of the paranoid right, is the ultimate symbol of their fears about the feminist assault on male dominance.

But the realities of the story are more complicated and there's no real evidence that Reno had some political agenda.

"ATF agents led the massive raid shortly after 9:30 a.m. on the 77-acre compound of Mr. Howell's apocalytpic group, called the Branch Davidian. They were met with a wave of gunfire," the Dallas Morning New reported on March 1, 1993. "Reporters who said they been tipped about the raid — but declined to say by whom — said cult members appeared to be waiting for the agents, who were trying to arrest Mr. Howell on federal weapons charges. The agents intended to search the group's compound for submachine guns and homemade bombs."

The Waco Tribune-Herald conducted an eight-month investigation into Koresh, interviewing formal cult members and reviewing legal records. It revealed complaints that Koresh was having sex with underage girls and that he claimed he had "divine right to take every man's wife." But the ATF was responding to reports from former cult members that the Davidians were stockpiling illegal weaponry.

''We were thought of as God's marines,'' a former cult member told the Waco paper. ''If you can't die for God, you can't live for God.''

Koresh's defenders on the right favor gruesome rhetoric, painting the Clintons and Reno as child killers for what happened in Waco.

"I was just gonna say that if you take a look at actual assassins, Lee Harvey Oswald — leftist," Rush Limbaugh ranted in 2011. "Democrats were behind the storming of the Branch Davidian complex. Bill Clinton and Janet Reno."

Make no mistake, however: Koresh and his followers killed those children. Hindsight is always 20/20, of course, but if the federal officials made a mistake, it was in not taking seriously enough the possibility that Koresh was willing to kill so many children, including many of his own.

Looking over the 51-day siege, there were signs that the Davidians were not only holding children as hostages but also were seriously contemplating killing the child hostages rather than surrender.

As Diane Sawyer reported for ABC News in March 1994, 21 children were gradually released during the 51-day siege.

"But Koresh said he would not send out the remainder — his biological and adopted children," Sawyer reported. "They would stay inside the compound until the fire storm brought their death."

Koresh made a video inside the compound, ostensibly to show officials how things looked in there, but it also unsubtly read as a threat on the children's lives.

"We just thought we'd kind of break the ice and allow people to see just exactly, you know, what kind of people we have here," Koresh said on the tape. "I'd like to start off first of all with my oldest son. His name is Cyrus. Come sit over here, son. How old are you?"

He continued in this fashion, as Sawyer said, "clearly trying to manipulate the negotiators."

On March 5, during the siege, the Davidians released a 9-year-old girl to the federal officials,with a note from her mother threatening mass suicide. Koresh and his second-in-command, Steve Schneider, denied plans for mass suicide to the negotiators.

On March 28, Koresh denied having suicidal inclinations again, but he spent the next few days refusing to give any timetable for when he was going to come out, instead sending a letter to the FBI saying, "Heavens are calling you to judgment." At this point, forensics experts decided that he was never going to leave voluntarily. But they still waited 10 more days to make their move, while they contemplated other options.

On the day before the FBI launched a tear-gas assault to flush out the Davidians, they held up the children to the windows with signs that read, "Flames Await."

Recordings from inside the compound captured the Davidians talking about "fuel" and "fire" the day of the fire.

In 1994, the Dallas Morning News reported, new evidence emerged that three of the five Branch Davidians killed on Feb 28, during the firefight with federal officials, had been killed by fellow cult members. Federal officials believed they were being "finished off" after getting wounded, rather than surrendering so they could get medical help.

These details matter because they show that whatever else you want to say about the incident at Waco, it's clear that many of the Davidians were ready to choose death — and the murder of children — rather than watch their leader be arrested on weapons charges. Koresh could have turned the children over to the FBI at any point during the siege, but he chose not to, preferring to keep them in the building and he and his followers set it on fire.

But conspiracy theories painting Koresh and the Davidians as innocent victims of government depravity worked. As was extensively documented during his trial, Timothy McVeigh, all hopped up on conspiracy theories about Waco, decided to bomb a federal building in Oklahoma City on April 19, 1995, on an anniversary of the Waco fire.

During the sentencing phase of his trial, McVeigh submitted a statement asking for leniency because of his overwhelming anger about Waco. He did not get it and was executed in 2001. His attack killed 168 people. Nineteen were children.

McVeigh's actions did little to slow down the revisionist histories painting the Davidians as innocent victims and the federal officials as murderers. In February 2000, a crowd of protesters, led by Alex Jones, protested a speech she gave in Reno. Jones claimed the Reno had been "demonizing" the Davidians and demanded that she apologize.

A few months later, led by Jones again, a group of people built a church for the surviving Davidians.

"David is coming back to set things straight, and I mean, you have no idea how straight," Catherine Matteson, a surviving Davidian, said during the April 19 dedication, according to the Dallas Morning News.

In 1995 Republicans held a flagrantly partisan hearing over the Waco fire but were unable to show any real evidence of government wrongdoing. Under the continued clamor, Reno appointed Republican Sen. John Danforth to conduct another investigation. The new report once again exonerated federal agents and found that the Davidians set the fire. The most that has ever been turned up is evidence that FBI agents did not disclose three teargas canisters were fired 75 feet away from the compound, but these canisters had nothing to do with the fire.

Waco conspiracy theories are a good example of how far culture warriors on the right are willing to go to portray white conservative Christians as victims of some liberal, feminist conspiracy: defending a man and his followers who chose child murder over complying peacefully with nation's gun control laws or statutes against child abuse.