Betraying Snowden: There's a special place in journalism hell for The Washington Post editorial board

The Post editorial board came out against pardoning Edward Snowden, whose leaks won the paper a Pulitzer 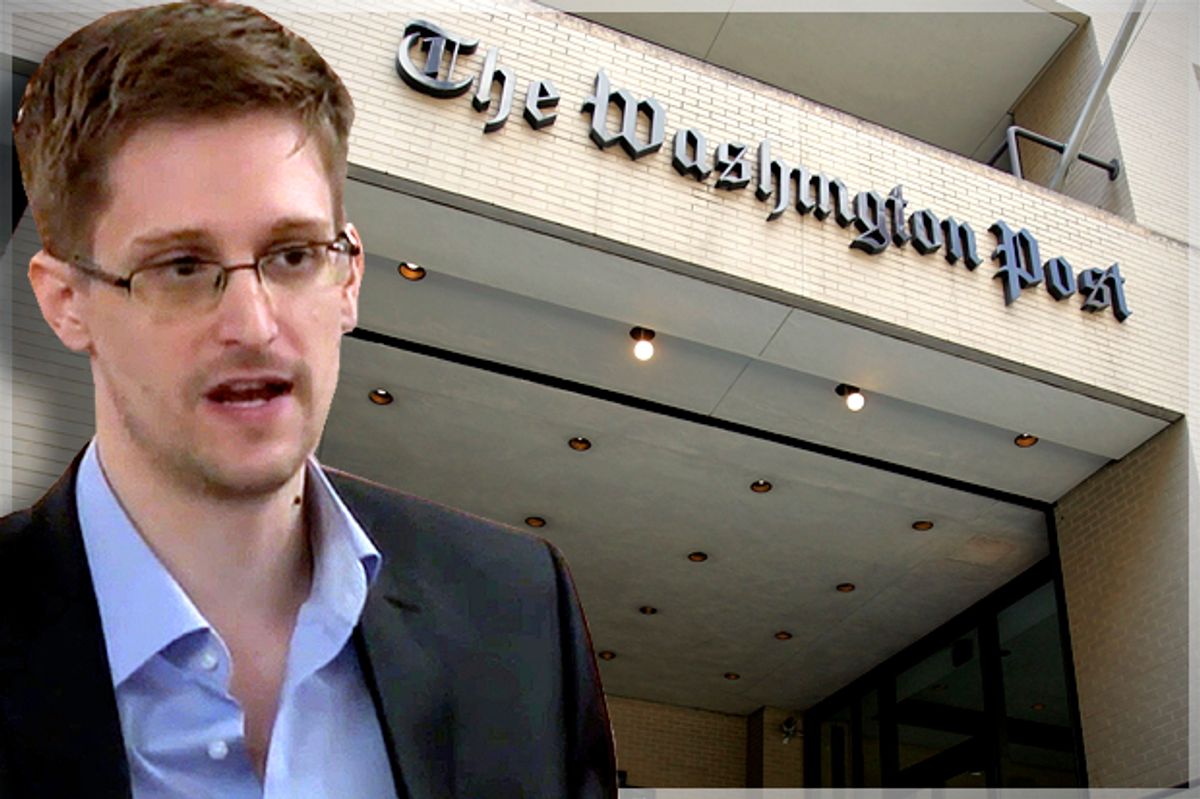 There is a special place in journalism hell reserved for The Washington Post editorial board now that it has called on President Barack Obama to not pardon National Security Agency whistleblower Edward Snowden.

As Glenn Greenwald wrote, it’s an odd move for a news publication, “which owes its sources duties of protection, and which — by virtue of accepting the source’s materials and then publishing them — implicitly declares the source’s information to be in the public interest.” Notably, the Post decided to “inexcusably omit . . . that it was not Edward Snowden, but the top editors of the Washington Post who decided to make these programs public,” as Greenwald added.

The Post’s peculiar justification is as follows: While the board grudgingly conceded that reporters, thanks to Snowden, revealed that the NSA’s collection of domestic telephone metadata — which “was a stretch, if not an outright violation, of federal surveillance law” — it condemns him for revealing “a separate overseas NSA Internet-monitoring program, PRISM, that was both clearly legal and not clearly threatening to privacy.”

Prism may be legal in terms of statutory authority but its constitutionality is certainly up for debate. And it’s rather odd to say that about a program that along with one called Upstream provides the the NSA with “hundreds of millions, if not billions, of communications, ” according to the Electronic Frontier Foundation. Prism is almost certainly vacuuming up communications by U.S. citizens (not to mention innocent people abroad, whose rights the editorial board doesn’t care about) and us being used to an unknown extent in federal criminal prosecutions.

Thanks in large part to Snowden, The Washington Post newsroom shared a well-deserved Pulitzer Prize for its work in exposing the inner workings of a national security state that is utterly incompatible not only with a democratic and free society but also with the operation of a free press. The Post, however, has now parted with its colleagues at The New York Times, the Guardian and The Intercept by calling for the prosecution of the paper’s most important source in decades.

The editorial board went on to cynically exploit the civil rights movement in service of its argument, writing that Snowden should “come home and hash out all of this before a jury of his peers” because it “would certainly be in the best tradition of civil disobedience, whose practitioners have always been willing to go to jail for their beliefs.”

Civil disobedience, however, is a tactic geared to expose an oppressor’s brutality. It’s not that people have a duty to submit to arrest but rather that they have a responsibility to disobey unjust laws. The Post editorial board should know this and stop exploiting the likes of Martin Luther King Jr. and company for ends they would never approve of.

The Post editorial also has averred that “Snowden hurt his own credibility as an avatar of freedom by accepting asylum from Russia’s Vladimir Putin, who’s not known for pardoning those who blow the whistle on him.” Given that it was the U.S. government that ensured that Snowden sought shelter in Russia, this is nothing more than intellectual dishonesty. As the Guardian has reported, Snowden “was on his way to Cuba” and “spent five weeks in the transit area after the US cancelled his travel documents, before being given temporary asylum in Russia.”

As Snowden said in 2014, “I don’t think there’s ever been any question that I’d like to go home.”

The leadership of the Post’s newsroom no doubt disagrees with the editorial board, and I understand that there is a wall between the paper’s two sides. But media institutions take political stances all the time and not just on their editorial pages.

In Pennsylvania, I participated in two lawsuits led by the state's affiliate of the American Civil Liberties Union while I was a reporter at the Philadelphia City Paper. One was against a state law infringing on the free speech rights of prisoners and the other was against the state’s refusal to disclose the source of drugs used in its lethal injection protocol. In the latter case, the Philadelphia Inquirer, the state’s most straight-laced media institution, joined in.

As Washington Post media columnist Margaret Sullivan (whose work as the New York Times’ public editor I truly miss) has written: “What Snowden was, without dispute, was an extraordinarily important source. Without his decision to bring the information to journalists, it is very unlikely that we would know what we do about mass surveillance in the post-9/11 world.”

Defending one’s sources, of course, is a bedrock value of journalism.

The ACLU, Amnesty International and Human Rights Watch have jointly created an online petition calling on Obama to pardon Snowden, as part of a broader campaign that coincides with the release of the Oliver Stone film "Snowden." Journalists are not just reporters covering a story but also workers with professional and political responsibilities. We should sign on. If individual reporters can’t, then the papers should. It's a shame that the Post, of all institutions, hasn't done so.