Breaking: "Sit down, David Brooks! I shall stand against kneeling during the national anthem!": The Greatest Living American Writer

Our forefathers slaughtered and enslaved millions for one reason: so we could stand during a song at a ball game 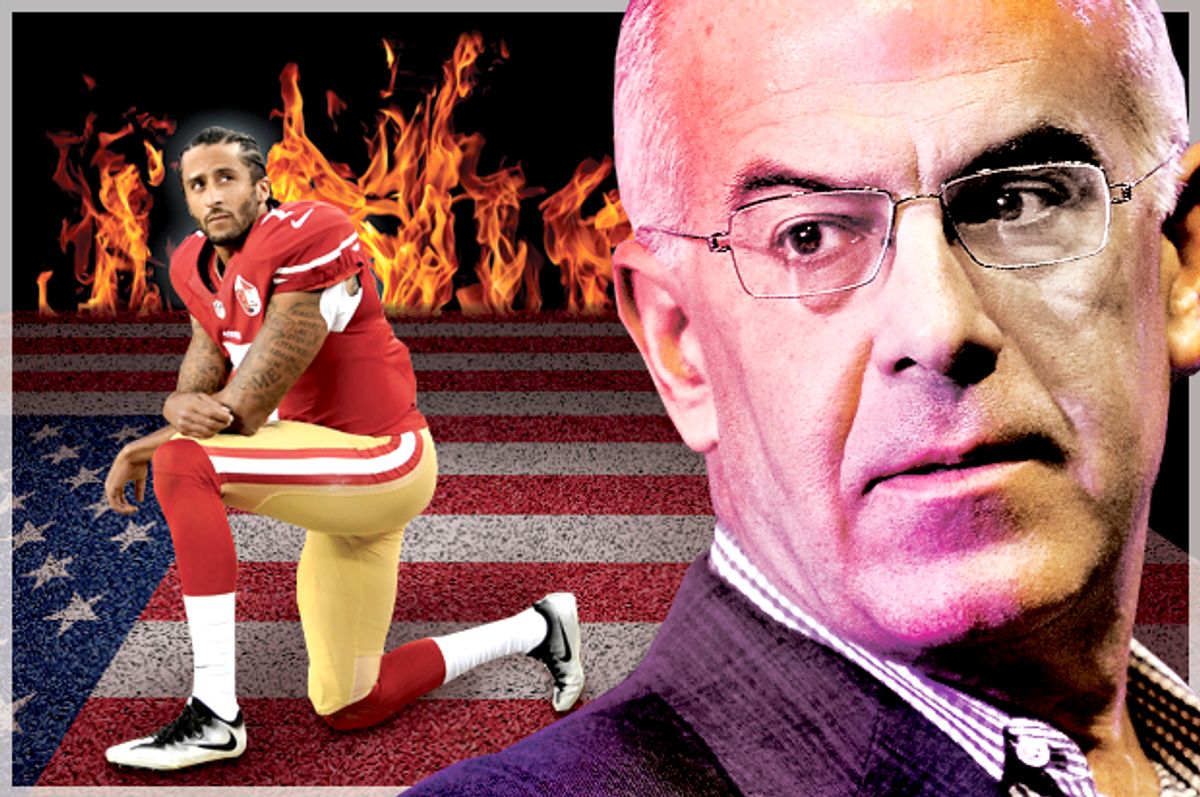 I understand why high-school football players, and middle-school tuba players and fifth-graders whose dads were shot by the cops are “pulling a Kaepernick.” Believe me, kids, I’ve been there. In 1973 my cousin Tad and I boycotted our racquet club for an entire week because it was refusing to admit a Jewish family. Nothing came of our efforts, and the Mount Winchester Squash Society remained Semite-free for another six years. But we stood tall. Injustice is injustice, no matter the price of admission.

That’s different, however, from not standing during the national anthem. Such an action is not only counterproductive; it’s quite unseemly in the grand picture and it runs directly against everything for which our country stands. We live in America, after all, the most exceptional country in the exceptional history of the human race.

Folks in hats with buckles on them founded our country. These people believed in several principles — that you should be able to worship any god you want as long as he is Christian, that you shouldn’t eat with your hands and that reading is fundamental. Our American ancestors slaughtered millions of people and enslaved countless thousands so that we could be free to stand around during a song at a ball game. Then in 1776, a bunch of sweaty, wig-wearing men signed an independence document declaring that all men should be created equal.

“But,” they wrote, in a lesser-known paragraph, “When kickoff approaches, don’t kneel during a national anthem because that’s unpatriotic.” A decade later, Alexander Hamilton, who despite current popular perceptions, was not a multicultural tap dancer but rather a stolid, law-and-order loving fan of the sporting life, added this to the back end of the Constitution: “We shall not sit down before the flag when the patriotic songstress trills because sitting is as bad for you as smoking.”

Over the next hundred years, as I wrote in my epic history of the Lincoln presidency, "Talk to the Beard," America proved time and again that the best way to create social change is just to go along to get along and not do anything that will call attention to yourself. That’s especially true when it comes to standing for the national anthem, even though we didn’t actually have one until 1931. As the Great Emancipator himself said, “The Oversoul covers me with a blanket and I shall not take the knee while gazing upon the Gridiron.”

Meanwhile, closer to the present day, black people have always loved the flag like it’s their precious binky. It’s a little-known fact that the police played the National Anthem for Martin Luther King Jr. while he was in Birmingham jail. He stood with his hand over his heart, tears in his eyes the entire time. When I think of Dr. King, I don’t think of protest. I think of a cuddly black preacher who would never disrespect the great game of football. We must stay true to his meaning and teachings.

In 1964, I went down South with the Freedom Riders, working on a sensible and semi-critical article about the “limits of civil rights” for the Partisan Review. The bus driver played the national anthem the whole time. Actually, some people wanted to listen to The Beatles and James Brown, but I pitched a hissy, saying, “My brothers and sisters, our sense of national purpose and collective story depends on continually paying homage to this droning, archaic war song.”

As we sing the national anthem, even a parodic version that calls it “The Star-Spangled Banana,” we’re collectively joining in a celebratory ritual of the things that made America great: football, stagecraft, mainline Protestantism and eating a sensible, quiet dinner with your family. All that is being lost, I fear. If we don’t hold fast to patriotism via blind arrhythmic genuflection to a symbolic piece of cloth, we’ll lose the sense that we’re all in this together. We’ll lose the sense of shared loyalty to ideas bigger and more transcendent than our own short lives. Also, it’s easier for your phone to slip out of your pocket when you’re sitting or kneeling, and phones can be expensive to replace.

You see, what’s wrong with America isn’t that we’ve unwittingly let one of our two major political parties fall into the hands of a fascist con man who is hundreds of millions of dollars in debt to Russia. It’s that we lack a sense of collective purpose — of pulling the rowboat together toward uncertain destiny. I understand that kids and athletes today think they’re doing something American by taking the knee against police violence. But we’d be better served if those kids instead gave the police a big hug and said, “Here is a tasty pie that I made. I love you. God bless America.”

We have a crisis in in this country. Not everyone wants the exact same thing that everyone else wants. When you stand for the national anthem, which is your civic duty as a cisgender son or daughter of the American compact, you’re building a little solidarity, trying a little tenderness and singing a radical song, written by a racist about watching a fort get bombed. Also, you’re probably singing it off-key. But I’ll save that corrective for my next column.