High times: Vertical farming is on the rise — but can it save the planet?

Groundbreaking advances in vertical farming, which doesn't break ground at all, raise hopes it can feed the world 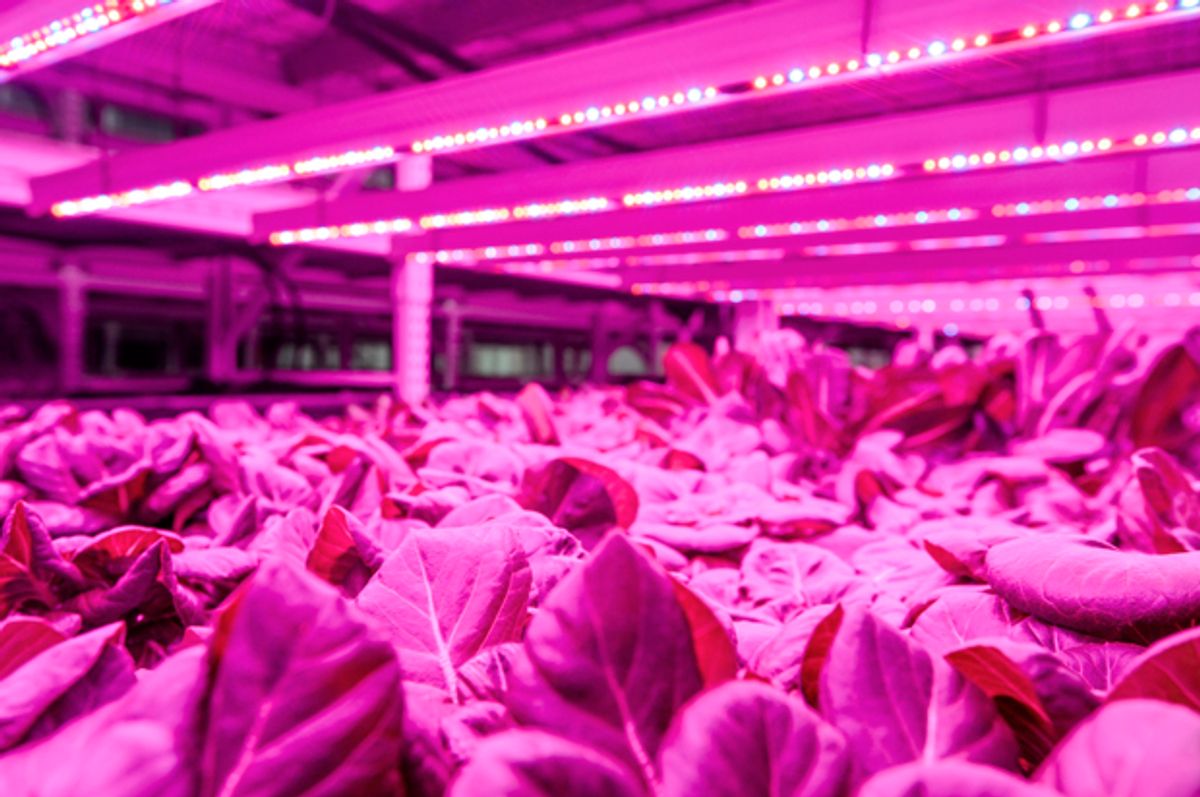 Farming as we know it is failing. Mom-and-pop operations are struggling to survive and Big Ag cares far more about its bottom line than about your health, or the health of the planet. Ecologists, anti-GMO activists, even sticker-shocked soccer moms in the produce aisle agree: It’s time for a revolution. Now, some experts are saying, this revolution may come via vertical farming, in which produce is grown indoors, in stacked layers. After years of technological trial and error, the practice is primed for blastoff.

The basic idea is not new. For centuries, indigenous people in South America pioneered layered farming techniques, and the term “vertical farming” was coined by geologist Gilbert Ellis Bailey in 1915. But the need for its large-scale implementation has never been greater. Under our current system, U.S. retail food prices are rising faster than inflation rates, and the number of "food insecure" people in the country — those without reliable access to affordable, nutritious options — is greater than it was before the era of agricultural industrialization began in the 1960s. And we’re only looking at more mouths to feed; according to the UN, the world’s population will skyrocket to 9.7 billion by 2050, an increase of more than 2.5 billion people.

Additionally, climate change is threatening the sustainability of our current food production system. Rising temperatures will reduce crop yields, while creating ideal conditions for weeds, pests and fungi to thrive. More frequent floods and droughts are expected, and decreases in the water supply will result in estimated losses of $1,700 an acre in California alone. Because the agricultural industry is responsible for one-third of climate-changing carbon emissions, at least until Tesla reimagines the tractor, we’re trapped in a vicious cycle.

So how do we break out?

“We have to extinct outdoor farming,” Dickson Despommier, PhD, emeritus professor of microbiology and public health at Columbia University and author of "The Vertical Farm: Feeding the World in the 21st Century," told Salon. “We have to put the earth back to the way it was when trees were the most abundant crop. If we paid farmers to plant carbon-sucking trees instead of corn — what’s called carbon farming — the earth’s atmospheric makeup could be completely different in 20 years’ time. But this means looking elsewhere for a food source.”

In vertical farming, that food source starts with a building – any building – usually comprising more than one floor. On every level are flat racks of plants taking root not in soil, which is unnecessary for growth, but instead in a solid, sustainable, and pesticide-free substrate, like mashed-up coconut husk. In these hydroponic systems, plants are fed a nutrient solution from one of a variety of devices, including a misting nozzle, a slow-feed drip, and a wicking tool (like the volcanic glass called perlite) that carries nutrients from an in-house reservoir directly to the roots.

The buildings are equipped with artificial lighting in place of sun, and they’re temperature and humidity controlled. Unlike in the great outdoors — where wind, precipitation, and season are out of a farmer’s hands — growing conditions are controlled and plants are able to reach maturity twice as fast. Often, the spaces are hermetically sealed to prevent common plant diseases, like wheat rust, from blowing through. And the final product? It tastes the same as crops grown outside, even better if those outside crops came from degraded soil. While leafy greens have traditionally been the most cost-effective crop to grow indoors, improved technology is also allowing for a broader range of options (think tomatoes, berries and ramps).

Vertical farming operations are sprouting in the U.S. and around the globe. Earlier this year, the $39 million AeroFarms, comprising 12 layers spread over 3.5 acres, opened in an old steel mill in Newark, New Jersey. Production yields the equivalent of 13,000 acres of farmland in the region. It also utilizes 95 percent less water than traditional vegetable farms since the H2O is recirculated.

In Philadelphia, Metropolis Farms, which already operates the world’s first vegan-certified vertical farm in North America, is planning a network of 10 vertical projects throughout the city, including the world’s first solar-powered vertical farm. Because the technology has advanced so much in recent months, according to president Jack Griffin, this network will cost 5 percent of what AeroFarms did, require 80 percent less real estate, and allow for a greater yield. Similar projects are seeing success in Japan and Berlin —and in Sweden, a plantagon, or plantscraper, 16 stories tall is in the works.

The goal, in addition to creating green-collar jobs, is to bring nutritious produce to urban areas where high-quality, fresh food is hard to come by. With 70 percent of the world’s population expected to reside in cities by 2050, utilizing agritecture to eliminate these food deserts is an increasingly attractive option. In the U.S., $32 million in venture capital was invested in indoor agriculture in 2014, and proponents say the industry has a revenue potential of $9 billion.

But not everyone is convinced the idea won’t go to seed. Early this year, in an article for Alternet, environmental writer Stan Cox argued against growing food in high-rises because of the method’s large energy requirement — specifically, the need for LED lighting in lieu of sunshine. Louis Albright, PhD, emeritus professor of biological and environmental engineering at Cornell University, called vertical farming “pie in the sky” for the same reason.

“The sun is equivalent to $400,000 worth of electricity per acre when growing outdoors,” Albright told Salon. “What vertical farming can save in transportation costs is quite small comparatively. It’s not viable.”

But proponents of vertical farming say such rebukes are based on outdated information — the efficiency of LED lighting has increased dramatically, by 50 percent between 2012 and 2014. Progress is expected to continue — the U.S. Department of Energy has recently adopted new LED efficiency standards, set to be finalized by January 2017. Meanwhile, vertical farms are hiring engineers and ergonomists to reduce the footprint even further.

“We designed our own LED lights to dial into wavelength spectrums,” Allison Towle, director of community engagement at the Los Angeles vertical farm Local Roots, told Salon. “We control them to emit only red or only blue or only white light, whichever helps a specific plant grow, which reduces energy output. Our R&D phase was two years long, because we developed these specific recipes, meaning for each plant we determined the right kind of lighting, the right nutrient makeup in the water, and the right amounts of each. This has brought outdoor growth times down by 40 percent.”

Robert Colangelo of the Indiana-based Green Sense Farms, which has 10 new projects in the deal pipeline, says improvements in LED efficiency are largely responsible for his current expansion, which involves building a network of vertical farms throughout the U.S., Canada, Scandinavia and China. The plan is to launch at points of consumption — grocery stores, hospitals, colleges and military bases — for direct-to-consumer sales. The food will be fresh, and the distribution-related carbon emissions, nonexistent.

“Comparing the energy requirement of growing outdoors versus growing inside is like comparing apples and oranges,” Colangelo told Salon. “We use LED lighting and they use sunlight. But they need tractors and other mechanical equipment, more water, fertilizer. It’s two different growing processes. Instead of comparing them, look at the crops and evaluate the most sustainable way to grow each one. Commodity crops, like soybeans, will likely always be grown outdoors. Leafy greens are better inside. What vertical farming has done is stratified the industry.”

In the future, some vertical farmers, like Colangelo, are looking to incorporate biopharmaceuticals into their growing rosters. And NASA, which counts itself as a vertical farming pioneer, may end up using the method for growing food on other planets, in a more sophisticated version of the techniques used in "The Martian." But for now, the industry is still in its infancy.

“It’s like the beginning of the Internet, or even the Internet 10 years ago,” Despommier told Salon. “Look how far that’s come. There are people who looked at the airplane and thought: ‘That will never fly.’ But people are going to continue innovating. In 10 years’ time, we’ll all be getting our food this way.”