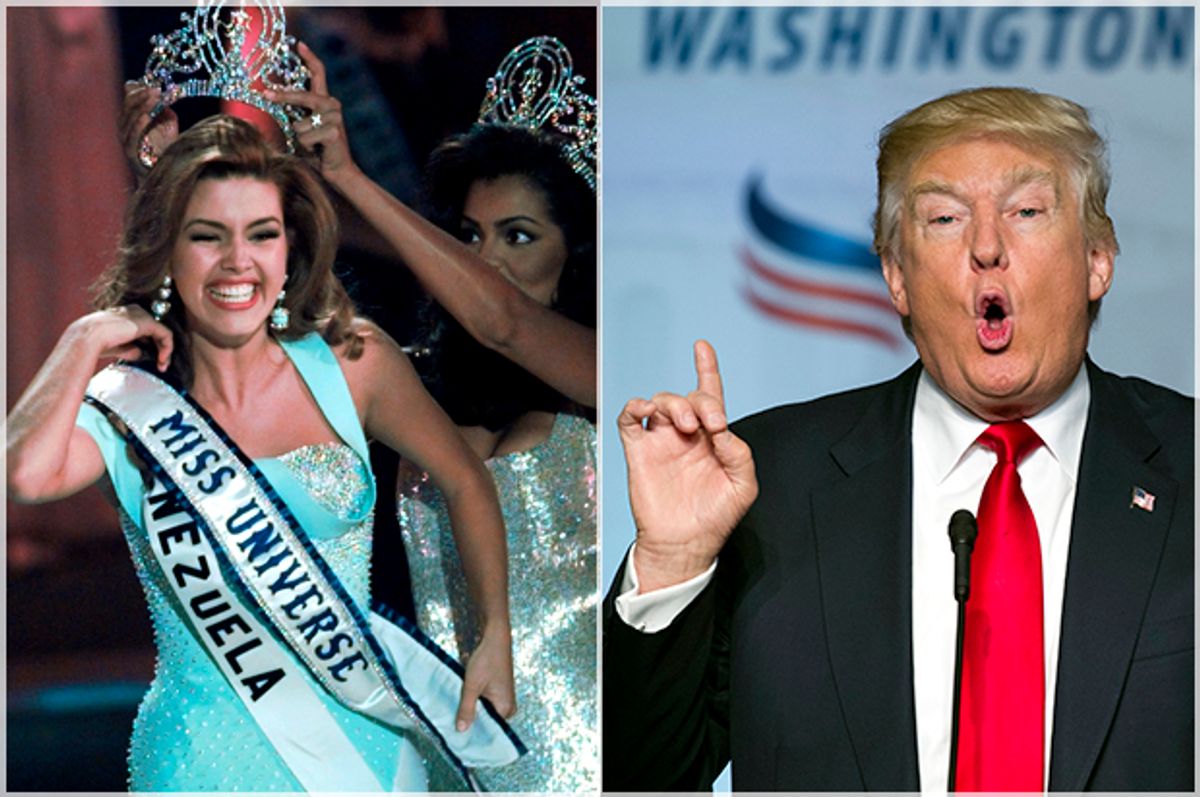 Do the 70 percent of Americans who are overweight or obese mind that the Republican candidate for president of the United States is so openly contemptuous of them? But while he may not know much about foreign diplomacy, his continued disdain for a former Miss Universe proves that at least Donald Trump is consistently clear in his NO FAT CHICKS policy.

Twenty years ago when Venezuelan beauty Alicia Machado was crowned Miss Universe, she soon became the subject of intense concern trolling when she gained weight. Now two decades later, Trump, who was an owner of the pageant at the time, still describes the experience as "a problem." Speaking on "Fox and Friends" Tuesday morning, Trump affirmed that Machado was the "absolute worst."

The would-be commander in chief — whose own health records would indicate he is overweight — has long made clear his preferences in body types. He has repeatedly referred to former co-host of "The View" Rosie O'Donnell as a "big fat pig," and during Monday night's debate he affirmed, "I said tough things to her and I think everybody would agree that she deserves it and nobody feels sorry for her."

Last year he despaired that supermodel Heidi Klum is "sadly, no longer a 10." He doesn't limit his disgust to just women, either — in 2015, after he had a man kicked out of a rally in Massachusetts, he told the crowd, "You know, it's amazing. I mention food stamps and that guy who's seriously overweight went crazy." And Monday night, he envisioned a potential hacker as "somebody sitting on their bed who weighs 400 pounds, OK?"

In contrast, he's famously supportive of those who conform to his ideal body mass index, saying several years ago of his child, "She does have a very nice figure. I’ve said if Ivanka weren’t my daughter, perhaps I’d be dating her."

So you can imagine how disappointed — how downright cheated — Mr. Trump must have felt when Alicia Machado accepted the title of Miss Universe and then cruelly put on weight. Of course, back then, it wasn't just Trump who was horrified.

In 1997, CNN gasped, "When Alicia Machado of Venezuela was named Miss Universe nine months ago, no one could accuse her of being the size of the universe. But as her universe expanded, so did she, putting on nearly 60 pounds. Indeed, the reigning Miss Universe learned the hard way that an extra 15 or 20 pounds can gain you a ton of publicity."

Trump told reporters at the time, "Some people when they have pressure eat too much. Like me. Like Alicia."  He reportedly told Howard Stern the then-19-year-old was "an eating machine." And he explained to People, "When you win a beauty pageant, people don't think you're going to go from 118 to 160 in less than a year, and you really have an obligation to stay in a perfect physical state."

Machado has disputed the amount she gained. Also, who cares? She was publicly put on a strict diet and exercise regimen to correct what Trump called "her problem" — even as she admitted to the Washington Post that at the time she had won, "I was anorexic and bulimic, but almost all of us are. The year leading to it, I didn't eat at all. And whatever I ate, I threw up. I weighed 116 pounds when I won. I was skeletal."

Today, Machado is a healthy size, a U.S. citizen and a Hillary Clinton supporter. And she's come forward with more insight into her reign, saying that during her time as Miss Universe, Trump called her fat, "Miss Piggy" and "Miss Housekeeping."

Last month she told The New York Times, "They took me to the gym, and I’m exposed to 90 media outlets. I was about to cry in that moment with all the cameras there. I said, 'I don’t want to do this, Mr. Trump.' He said, 'I don’t care.'" Nor does he now.

On "Fox and Friends" on Tuesday, Trump reiterated his feelings, calling in to say that Machado "was the worst [Miss Universe] we ever had. The worst. The absolute worst. She was impossible. . . . She was the winner and, you know, she gained a massive amount of weight and it was a real problem."

Does a woman — even a tiara-wearing one — have an "obligation" to keep herself "skeletal" or, as Trump once put it, "perfect?" Of course not. On Tuesday Trump could have chosen to walk back some of his comments, to make any kind of statement whatsoever to suggest that a woman who says she had eating disorders shouldn't be shamed for "massive" weight gain. Unsurprisingly, he didn't. By the way, feel free to check out some images of Machado from the time and judge for yourself how scandalous the appearance of this then teenaged "eating machine" truly was.

When you consider the many, many ignorant and awful things about the Republican contender for the presidency, maybe his abhorrence of anyone whose number on a scale exceeds his ideal isn't that important. But it speaks yet again to his intolerance, to his sneering meanness and certainly to his low opinion of women who fail to thrill him. And any citizen who doesn't look "perfect" should be wondering right now how little this man who wants her vote must think of her.